Pneumococc vaccine is effective and safe but vaccine immunogenicity is a challenging matter in renal transplantation and accessible guidelines suggest pneumococcal revaccination every 3–5 year intervals .This study judge guideline based on reality .

Articles related to pneumococc vaccine in renal transplant was evaluated from 1996 -2019 .

Most accessible studies followed small selective healthier cases for short period time ,they showed persistence of immunogenicity with PPSV23 vaccination in hemodiyalisis and renal transplant after 1 year is same (43%) ,the vaccnes cover half of pneumococc serotypes , not same for all types (6B type :12% , 19F :27% ), while the revaccination with the newer vaccine (PPSV23) was less effective than the first immunization that produce a significant immune response followed by rapid decline of immunity, there is not also difference in immunogenicity of PCV7 versus PPV23 at 8th week postvaccination

Pneumococcal vaccine immunogenicity appearance and duration in renal transplantation is not compatible with guidelines recommendations , immunogenicity decrease after first year dramatically in spite of using newer generation and booster doses ,we are face to questions such as the best time of installation,how can enhance immunogenicity and the best vaccine type that we can use .

The increase in resistance to antibiotics in the treatment of bacterial infections is a global problem. Streptococcus pneumoniae infection is a bacterial infection responsible for one-fifth of child mortality in Africa. The aim of this study was to formulate and evaluate immuno stimulatory complexes (ISCOM) from Carica papaya leaves.

It can be concluded from this study that Carica papaya leaves has immunomodulatory capacity and has significant saponin yield which can serve as a component of ISCOM formulation. Carica papaya based ISCOM promises be useful in the defense against Streptococcus pneumoniae infections.

Determining the host molecular genetic characteristics of pneumococcal colonisation may inform the development of new clinical interventions which could interrupt pneumococcal transmission and establishment of disease. We performed a genome-wide association study to identify the genes associated with pneumococcal carriage.

Respiratory tract infection(URI) is one of the most common diseases of childhood . Resistance to antimicrobial agents is becoming a Basic problem in worldwide and in Asia. The aim of our study was to determine the Effects of Antibiotic on Oropharyngeal Pneumococcal Colonization and antibiotic resistace in Children with URI.

This cross-sectional study was performed in mid 2019, 70 Children ( mean age of 6.92 years)with URI were selected . Nasopharyngeal samples were collected by sterile swaps and then inoculated on selective agar. After 24 h incubation, microbiological tests were performed and antimicrobial sensitivity tests were done.

Mushrooms are white rot fungi regarded as one of the well-known food possessing various kinds of biopharmaceuticals compounds. Pleurotus ostreatus is an edible mushroom with history of medicinal uses.

Phytochemical constituents of the methanol extract were quantified while pure isolate of Streptococcus pneumoniae was obtained using standard protocols. The effect of the extract on cellular immune responses was assessed by Phagocytosis Evaluation and Nitroblue Tetrazolium Tests. In vivo study against Streptococcal infection was evaluated using the neutrophil adhesion, carbon clearance and Hemagglutination titre tests in mice.

Pleurotus ostreatus has high carbohydrate and protein contents. It showed a significant stimulation of the cell mediated and humoral immunity against Streptococcus pneumoniae infections.

PREVALENCE OF PNEUMOCOCCUS SEROTYPES IN MENINGITIS AT THE MOTHER AND CHILD CENTRE AFTER INTRODUCTION OF PCV13 VACCINE IN CAMEROON BETWEEN 2013 TO 2018. (ID 33)

The major cause of morbidity and mortality in children below 5 years old, Streptococcus pneumoniae meningitis is a global scourge. Since 1 July 2011, the PCV13 pneumococcal vaccine has been introduced into the routine immunization program in Cameroon. We describe the serotypes that caused pneumococcal meningitis after introducing the vaccine.

Pneumococcal isolates of children below 5 years of age between January 2013 and December 2018 sentinel surveillance for meningitis conducted at the Mother and Child Center, were serotyped and sequentially multiplexed polymerase chain reaction.

The annual SAVE study was initiated in Canada in 2011 after PCV-13 was introduced. The study aims to detect antimicrobial susceptibility changes, overall and by serotype, in S. pneumoniae (SPN).

In 2018, 1878 SPN were collected as part of the SAVE study. The susceptibility results of the 10 most common serotypes in 2018 are shown below. 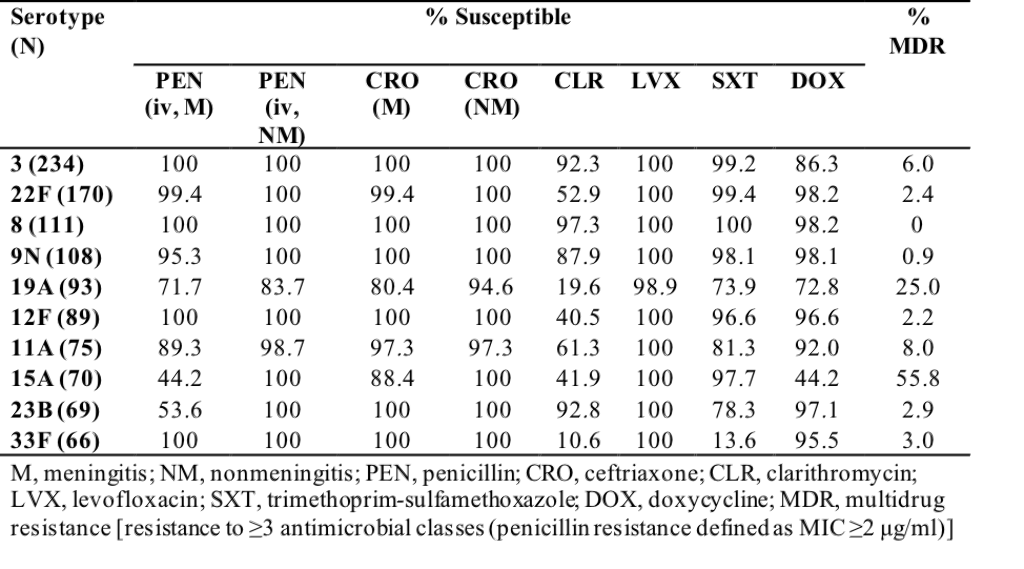 Ongoing changes in the epidemiology and susceptibility patterns in SPN in Canada were observed.

Information was provided by the departments of health of each region and republic of RF, using special forms.

In four years, 1.9 million of adults have been vaccinated against pneumococcus. The highest coverage was achieved among recruits - 92.5%. The coverage of patients with chronic lung diseases, including COPD was 15.1%. In addition, pneumococcal vaccination was carried out among other groups of immunocompetent adults with chronic diseases. However, the absolute number of vaccinated was not large. Coverage rate was 3.8% among patients with chronic heart disease, 2.8% in patients with diabetes mellitus and lower in other groups. In some regions of Russia pneumococcal vaccination of adults with immunocompromising сonditions and people with occupational risk factors was carried out. 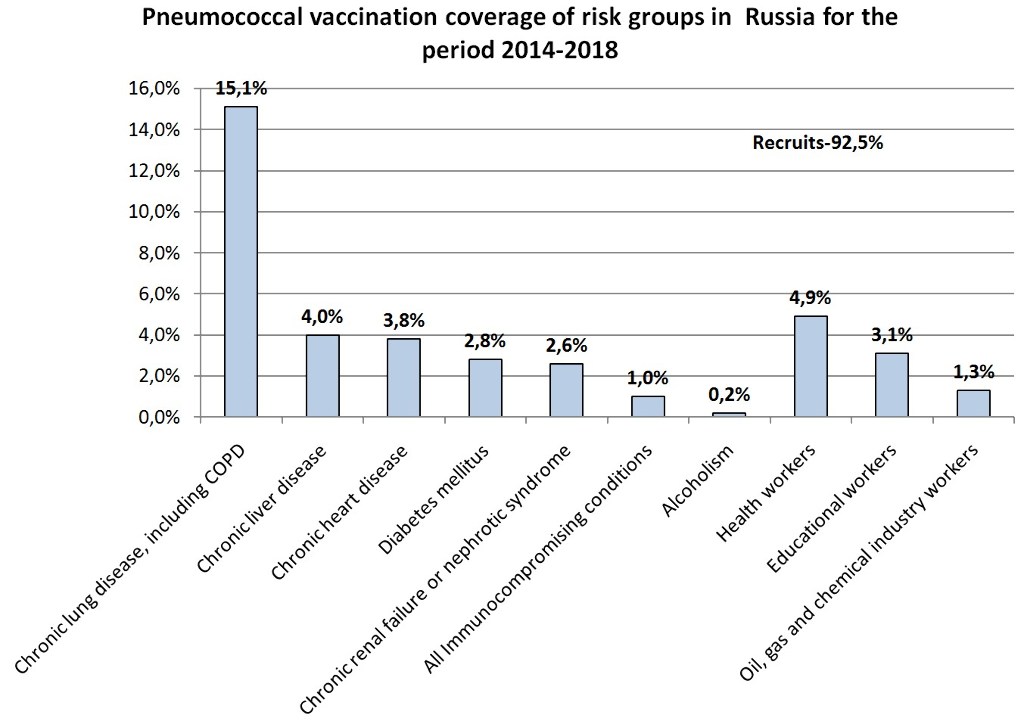 In 2 successive winter seasons (2016-2017), we enrolled 334 children less than 5 years, excluding those with signs of infection, antibiotic intake or hospitalization in the preceding month. Additionally, we studied 32 S.pneumoniae isolates from IPD, identified during the study duration.

We tested for S.pneumoniae by culture and PCR from NC and IPD. Serotyping was performed by sequential multiplex PCR for all positive samples. AST was done to S.pneumoniae isolates by Vitek-2™.

The AST of NP isolates revealed low susceptibility rates to all antimicrobials except for vancomycin, levofloxacin and clindamycin. Isolates from clinical specimens, however were more susceptible.

Serotypes 1, 18ABC and 6 caused NC and IPD, and had low antimicrobial susceptibility.

The present study analyzed cross-sectional data from the 2004 to 2014 Bangladesh Demographic Health Survey. Bivariate analysis was performed to estimate the association between ARIs and associated care-seeking. A p-value of <0.05 was considered as the level of significance.

A total of 10,147 ARI children aged < 5 years were included in the study. Factors such as education, birth order, household electricity, household source of drinking water, toilet facility, media exposure (radio), nutritional status (WHZ), household cooking fuel were found to be significantly associated with the utilization of healthcare for ARI. The family who had higher birth order, not electricity in their household had 1.16 (95% CI 1.03-1.30; P = 0.009) and 1.63 times (95% CI 1.43-1.86; P = <0.001) had less chance to receive care.