Towards the cure of T1D

The care of patients who undergo bariatric surgery is complex. These patients are not only severely obese, they are also burdened by the other expressions of the metabolic syndrome including type 2 diabetes, polycystic ovary syndrome, NASH, hypertension among other associated diseases. They pose challenges in selection, in assessment, in preparation for surgery, in post-operative care and, especially, in the management of late complications, including neuropathies due to malnutrition, episodic hypoglycemic attacks, internal hernias and mental health challenges

Review of current approach to bariatric surgery. Comparison with other multidisciplinary centers such as pediatric hospitals, cancer centers, heart institutes

Surgeons do not have the resources, the time nor the training to address these issues alone. Interdisciplinary care is required at every stage of the progression before, during and after bariatric surgery.

Accordingly, it is time to follow the successful examples in the care of cancer and heart disease with the establishment of metabolic centers staffed by the various disciplines involved in the care of these complex and challenging patients. This presentation will review the early and long term outcomes of bariatric surgery, the shared pathology of the various expressions of the metabolic syndrome, the organizational structure of the proposed centers and approaches to certification for quality control.

The purpose of this study is to compare the cross-section-area(CSA) of ​​the median nerve according to the severity of carpal tunnel syndrome(CTS) in patients electrophysiologically diagnosed as CTS alone and diabetic polyneuropathy(DPN) with CTS.

DPN is diagnosed according to the criteria set forth in The Diabetes Control and Complications Trial. CTS is characterized by the Steven’s criteria. The severity of CTS was determined using Steven's classification. The CSA of the median nerve is measured at the distal wrist crease and forearm 12cm proximal to the distal wrist crease using ultrasonography.

Median nerve CSA at the distal wrist crease and the wrist-to-forearm ratio of CTS group and DPN-CTS group were compared according to CTS severity. There was no significant difference between both groups of any severity (Table3,4).

The results of this study concluded that median nerve swelling at the wrist level in DPN CTS patients was thought to be due to compression effects on the wrist rather than the metabolic effect of diabetes.

Skin autofluorescence (SAF) indicates a content of advanced glycation end products and oxidation state of tissues. The aim was to assess a correlation between SAF level, measured with fluorescence spectrometry, and glucose metabolism parameters in patients with diabetes mellitus type 1 and type 2 and in healthy participants.

We found a positive correlation between SAF intensity and HbA1c level, no correlations with glycemic variability parameters in young type 1 diabetic patients. The measurement of SAF with the spectrometer FOS-1 can be used for additional evaluation of diabetes complications risks.

Additional information: this research is supported by Russian Science Foundation (grant No. 17-75-30052).

Aim -Charcot Foot is a cause of Non Healing Ulcers in aWDiabetic.Surgery or Total Contact Cast remain the mainstay of treatment.Topical Wound Oxygen (TWO2) have been used in healing of Diabetic Foot ulcers recently.Oxygen delivery to the wound reduce inflammation,increse Growth Factors and helps Epithelialization.This could be used in Charcot Foot Ulcer of a Diabetic presenting with co -morbidities .

Methods- A Diabetic Male with toe amputations 2nd 3rd 4th 5thtoe presented with chronic multiple plantar ulcers of right foot of Wagner Grade 1.Investigations showed impaired renal function,elevated Esr and Hscrp and Peripheral arterial disease and peripheral neuropathy. Radiological examination and Thermography showed signs of Charcot Foot. After informed consent the foot was kept in a sterile closed bag and cyclical pressure applied with TWO2 for ninety minutes for five days a week.These cycles were repeated for ten weeks .Debridement and dressing with sterile gauze with daily follow up was done .The healing was monitored with Thermography and pictures using Wound Zoom Camera. Antibiotics or other medications were avoided due to the co morbidities.

Results- The Charco Foot with multiple plantar ulcers in a Diabetic with all small toe amputations healed with TWO2 with a cyclical pressure of 25mm of Hg given for 90 minutes for 5 days a week for ten weeks.

Conclusions- TWO2 is an option for healing of Chronic plantar ulcers in Charcot Foot in a Diabetic.

Oscillometric tonometry, IOFF, PPG and TRO techniques were combined in single device and used to assess a set of 7 parameters of central and peripheral hemodynamics. Pilot measurements were conducted on 18 DM patients (8 with diabetic retinopathy and 10 without it) and 18 healthy volunteers. To consider influence of peripheral and central hemodynamic factors (heart rate, blood pressure, arterial stiffness, blood flow, etc.) in assessment of skin microvasculature functional state (including endothelial and neurogenic regulation), we calculated complex diagnostic criterion (DC) as the weighted function of all measured quantities.

The device, created on the basis of IOFF, allows to perform comprehensive assessment of peripheral hemodynamics and to reveal microcirculation disorders of various genesis. In long term, the proposed technology can be used to assess DM complications risk and as additional endpoint in DM management.

Non-invasive microcirculation assessment is a promising additional method to estimate the risks of complications development and to monitor the treatment efficacy. Aim of this study was to show that a non-invasive microcirculation assessment, using a laser Doppler flowmetry (LDF), can be used to evaluate odds of complications in patients with diabetes.

The study included 107 volunteers without diabetes (Group 1) and 250 diabetes patients which were divided into two groups: patients without retinopathy (Group 2) and those with retinopathy (Group 3). Perfusion was assessed using Laser Doppler Flowmetry during local heating test on the dorsal surface of the forearm.

Use of the LDF method enabled to determine skin microcirculation disorders both in patients with retinopathy and in those without it. It was shown that these microcirculatory disorders - unlike the singly measured HbA1c - indicate increased odds of retinopathy in a diabetes patient. We suppose that this parameter can be used in prospect for the additional control of the risks of the retinopathy development.

To evaluate intercourse of microcirculatory bed, EF parameters changes with nerves electrical activity metrics and compare them among patients with different HbA1C. 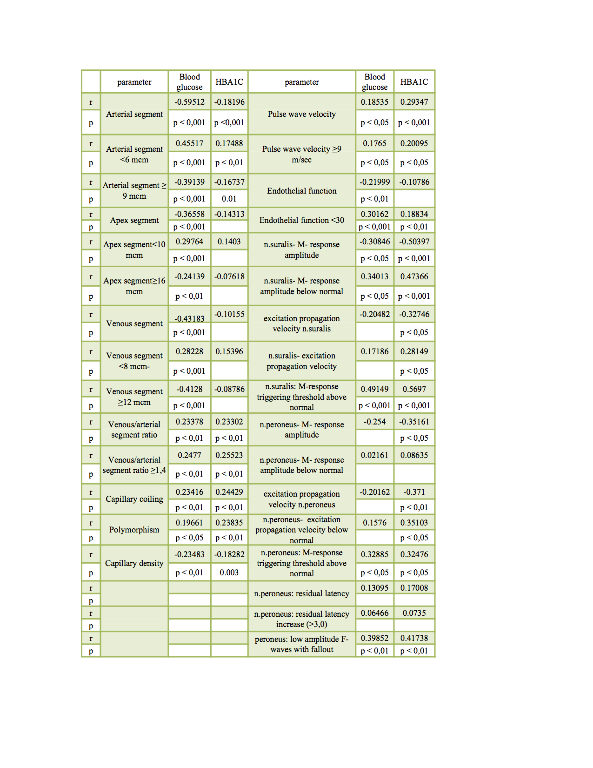 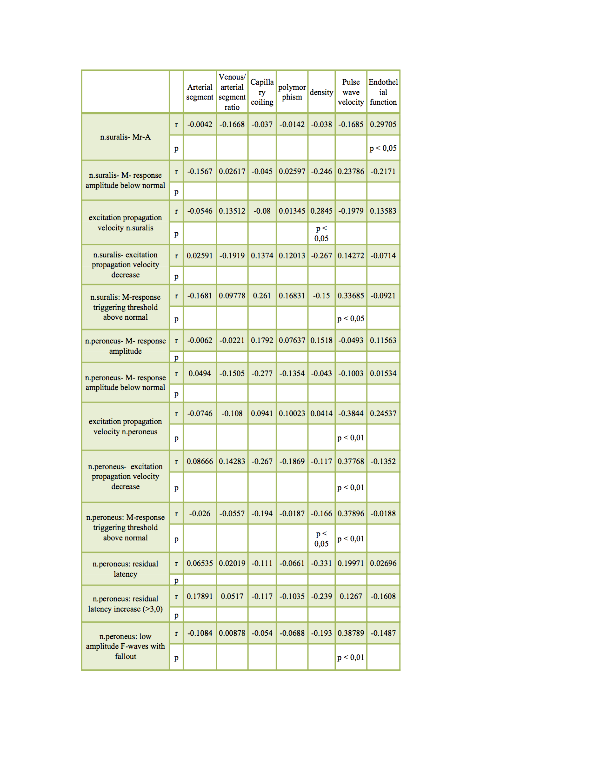 Aims: to assess the effects of associated autoimmune diseases on glycemic control, growth, metabolic parameters in children with type 1 diabetes (T1D) and to select the most predictive genetic, immune and metabolic risk factors of polyglandular autoimmunity in children with T1D.

In the main group 49 children had combinations of T1D with autoimmune thyroiditis (AIT), 17 − celiac disease, 2 – Graves' disease, 4 – AIT and celiac disease. Body mass index and height z-scores in both groups corresponded to the mean age values and didn’t differ significantly (p=0.82 and 0.71 respectively). HbA1c level in children with combined autoimmune pathology was higher than in the control group (8.23±1.91% vs 7.47±1.22%, p=0.006). There was no difference in insulin requirement (p=0.93).

At the present stage of the study we hasn’t found any difference in anthropometric and biochemical parameters in children with coexisting disorders compared with patients with isolated T1D. Children with polyglandular autoimmune pathology showed more poor glycemic control indicators.