The Conference will officially run on Central European Time (CET).

The viewing of sessions cannot be accessed from this conference calendar.
All sessions are accessible via the Main Lobby on the Virtual Platform.

In a recent experiment at the HZDR research electron accelerator ELBE the influence of dose rate and partial oxygen pressure on the Flash effect was studied in a zebrafish embryo model. High mean electron dose rates of 105 Gy/s (max regime) and partial oxygen pressure below 5 mmHg were found to protect zebrafish embryo from radiation damage compared to continuous reference irradiation (0.11 Gy/s) and higher oxygen pressure (Pawelke et al. Radiother Oncol 2021). However, the influence of beam pulse structure remains unanswered in this experiment.

In addition to the above mentioned two pulse regimes, the ELBE accelerator was used to mimic the pulse structure of a clinical electron linac delivering a dose of 28 Gy by 5 pulses at a frequency of 250 Hz. For comparison, a fourth regime of similar mean dose rate, but continuous beam (280 Gy/s) mimicking Flash irradiation at a proton isochronous cyclotron (Beyreuther et al. Radiother Oncol 2019) was applied.

First results indicate a clear difference between the "max regime" and the other three electron pulse regimes. Further analysis is under way and the results for different endpoints will be presented.

The ELBE electron accelerator can be applied to study the influence of beam dose rate and pulse structure on the Flash effect by varying both parameters over several orders of magnitude. Hence, it is the ideal tool for systematic studies on optimal electron beam parameters for Flash.

This work was supported by EMPIR 18HLT04UHDpulse project.

MONITORING A FLASH BEAM: FOR PRECLINICAL STUDIES AND TOWARDS CLINICAL APPLICATIONS

With medical linear accelerators, the dose is delivered in approximately a thousand of low-dose radiation pulses and is regulated by monitoring ionization chambers, which turn off the beam once the preset number of Monitor Units (MU) is reached. In FLASH electron beams, on the contrary, the dose-per-pulse is much higher (> 1 Gy/pulse), which, a) prevent the use of conventional monitoring systems, and b) implies that the complete treatment is delivered with a very limited number of pulses, sometimes only one. To guarantee that the planned dose is delivered as intended, new methodologies for monitoring must be elaborated for FLASH beam delivery.

In preclinical studies with ElectronFLASH4000 (SIT), we have defined FLASH-MU as a fraction of the pulse’s temporal profile integral, which is recorded with a non-destructive monitoring toroid. For the control experiments performed at conventional dose-rate, MU measured by classical monitor chambers have been cross-referenced with FLASH-MU, through calibration by film dosimetry.

This opens the discussion on techniques for FLASH monitoring and on beam cut-off strategies for radiotherapy treatments delivered with very few ultra-high-dose pulses. At least some of them can already be tested for dose accuracy and biological effectiveness.

Acknowledgement: This work is part of 18HLT04-UHDpulse project, which received funding from the EMPIR program.

As the development of suitable detectors in ultra high Dose Per Pulse (DPP) beams is on-going, temporary protocols solving limitations with standard tools are required for the acceptance of new dedicated machines. We present a protocol for system commissioning using clinically available dosimeters, optimizing the use of the detectors. Extra attention was given to beam characterization when varying the DPP.

Measurements were performed on the ELF, a dedicated research linac for Flash radiotherapy with electrons (ElectronFlash, SIT, Italy) at 7 and 9 MeV using standard dosimetric tools: a PTW Advanced Markus (AM) plane-parallel ion chamber, Gafchromic EBT-XD films, and alanine pellets. The system is highly tunable for pulse length, pulse repetition frequency and number of pulses. Collaboration with the developer allowed further tuning. The DPP was varied using pulse length, distance from the linac and e-gun current.

Performance tests assessing dose, dose stability, PDD, profiles, and output linearity to system settings were measured cross-referencing at least two detectors (comparable within 5%). Energy and dose outputs, monitored with films and AM, were stable within 5% in several months. The AM was used for daily QA for doses up to 0.5 Gy/pulse (model proposed in abstract #211). Changing the DPP using the above-mentioned parameters resulted in a linear output change and minimal variation (<1 MeV) of the spectrum.

We characterized the ELF using standard dosimetric tools. We propose the combination of alanine and Gafchromic films as absolute dosimetric standard. The AM can be employed as real-time tool for daily QA.

The radiobiological study of the FLASH effect requires accurate and reliable dosimetry. As scintillators are promising candidates, this work presents a first characterization of their response at UHDR, suggesting solutions to account for possible saturating effects.

The promising characteristics of scintillators as on-line dosimeters for UHDR were validated and possible solutions to reduce saturation effects have been evaluated. Further research on the response by varying PRF is needed.

This work is part of the 18HLT04 UHDpulse project which received funding from the EMPIR programme.

A PURSUIT FOR A HIGH-THROUGHPUT INDICATOR OF THE FLASH EFFECT

Despite an immense research interest in FLASH-RT, the precise beam requirements for obtaining the FLASH effect have still not been elucidated. Yet, there is an increasing number of reports assigning the name FLASH to beams and irradiators without any supportive biological data.

Currently, the FLASH effect can be confirmed only in vivo, which requires time-consuming animal studies and corresponding ethical approvals. The FLASH community would therefore greatly benefit from a high-throughput FLASH beam indicator that can validate an UHDR beam for FLASH-RT. Such indicator has to generate an observable that follows the same dependency on temporal beam characteristics as the FLASH effect.

We used our published data on sparing of the normal mouse brain and killing of GBM to monitor the impact of gradually changing electron beam parameters (dose rate, dose per pulse) on the occurrence of the FLASH effect. These data were considered as a template to investigate responses of various high-throughput assays over the same range of beam parameters. In particular, we studied assays that previously showed differential response to our FLASH and Conv beams: H2O2 yield, O2 depletion, plasmid DSB, lipid peroxidation and zebrafish embryo. Only the length of zebrafishes grown from irradiated embryos showed the dependency on beam parameters mimicking the cognitive protection in vivo with low energy electron beam (Oriatron).

Since mechanistic differences between different types of beams (protons, X-ray) are possible, further investigations are mandatory to confirm universal validity of this model as a general FLASH indicator.
Hide

A commercially available plastic scintillator and a liquid fluorescein solution were coupled to a gated integrating amplifier and a field programmable gate array (FPGA) for dose monitoring and feedback control. The FPGA was programmed to integrate dose and measure pulse width for each radiation pulse. The detectors were characterized in terms of the radiation stability, mean dose-rate (Ḋm), and dose per pulse (Dp) linearity.

The Dp and the pulse width showed a consistent ramp-up period of ~4-5 pulse. The plastic scintillator was shown to be linear with Ḋm (40-380 Gy/s) and Dp (0.3-1.3 Gy/Pulse) to within ± 3%. However, the plastic scintillator was subject to significant radiation damage for the first 2 kGy (24%/kGy). The fluorescein solution was also tested to be linear with Ḋm (± 3%) and exhibited minimal radiation damage for an initial cumulative dose of 400 Gy. In-vivo dosimetry with a 1 cm circular cut-out revealed that the for the linac ramp-up period of 4 pulses, the average Dp was 0.043 ± 0.002 Gy/pulse, whereas after the ramp-up it stabilized at 0.65 ± 0.01 Gy/Pulse. 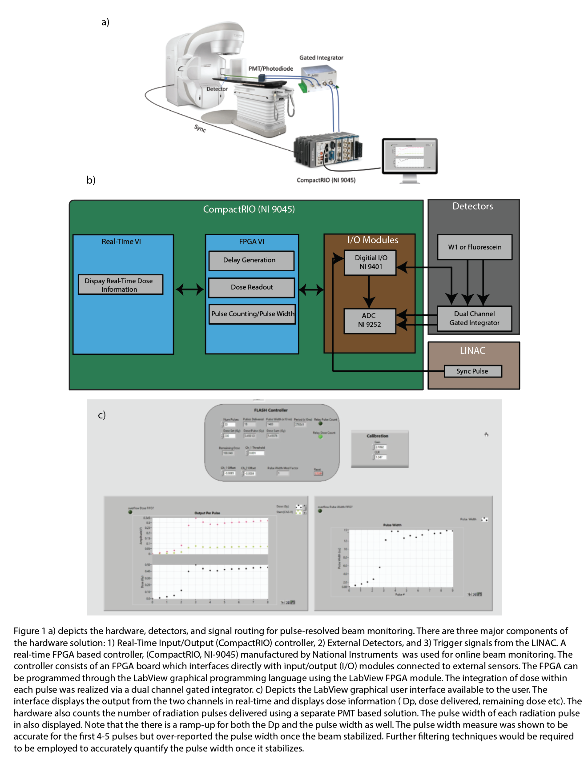 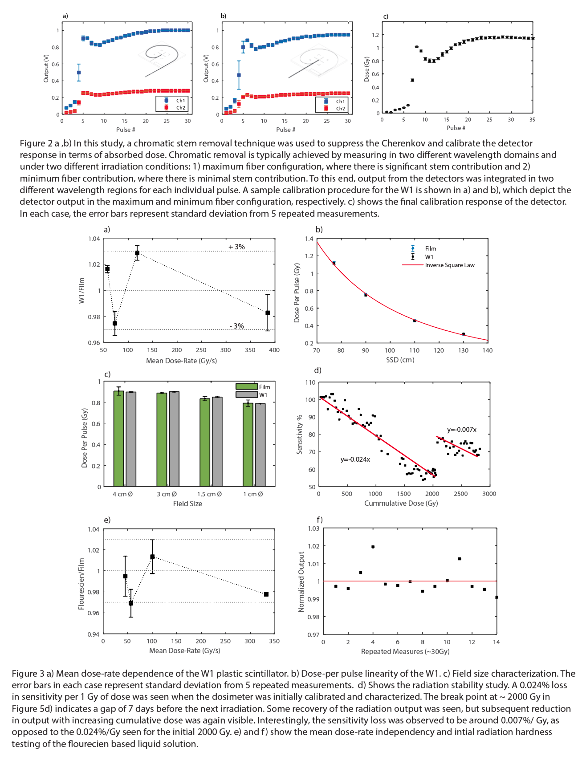 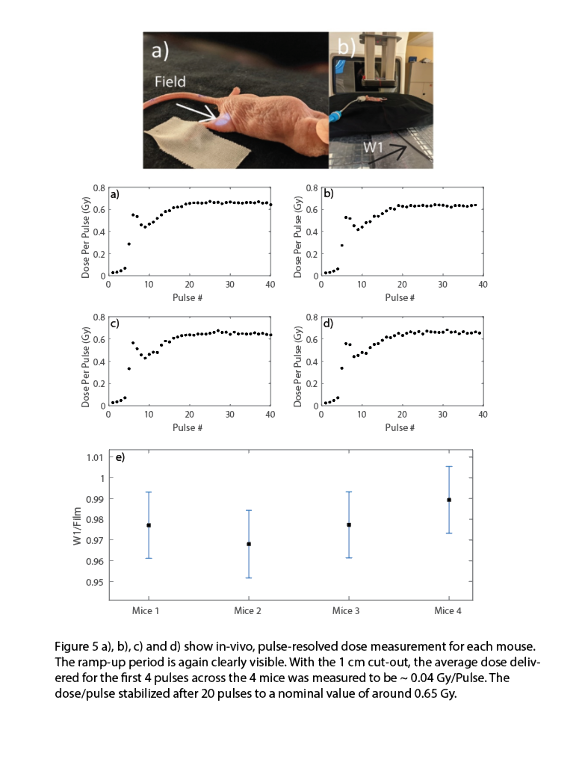 The tools presented in this study can be used to determine the temporal beam parameter space pertinent to the FLASH effect. Additionally, the hardware can be used to provide real-time feedback to the linac in terms of direct measurement of dose.