Reticular Dysgenesis (RD) is a rare autosomal recessive immunodeficiency, characterized by the combination of Severe-Combined-Immunodeficiency(SCID) with agranulocytosis and sensorineural deafness[1]. Discovered in 2009, RD is caused by a mutation in the gene encoding adenylate-kinase-2(AK2). In this paper we describe a novel AK2 mutation in a newborn female presenting SCID and RD.

RH was born in January 2019 at 37+6 weeks from an apparently non-consanguineous family. She presented normal APGAR but low-birth-weight, severe leucopenia, hypoglycemia, and abnormal immunology tests (Table 1-2). She failed neonatal hearing test and in her 4th day of life, she was diagnosed with sepsis due to omphalitis.

A bone marrow aspirate was in keeping with severe congenital neutropenia (Table 3), whereas AK2 DNA-sequencing showed a homozygous mutation for the variant c.308G>C, causing a missense change p.(Arg103Pro) at the protein level with deleterious in silico predictions. The RD diagnosis was confirmed, and urgent bone-marrow transplantion has been undertaken.

RD accounts for <2% of all SCID cases, with an annual incidence estimated at 1/3,000,000-1/5,000,000, higher in consanguineous families [2,3]. Mutations in the AK2 gene, located on 1p35.1[1], are responsible for RD[4]. Until now, AK2 mutations were found in 30 patients from 27 mainly consanguineous families [3]. The variant described has not been reported in the literature and it is absent from the gnomAD population database, although the p.(Arg103Trp) variant has been reported[5].

The only effective treatment for RD is bone marrow transplant with an overall reported survival of about 68%[3]. 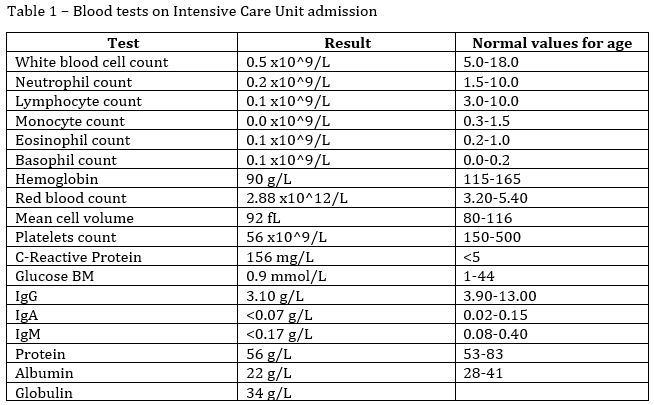