Background:
Circadian rhythm regulates the innate immune system. Both innate immune dysregulation and delayed onset of sleep wake cycling are associated with worse outcome in Neonatal Encephalopathy (NE). We hypothesised that patients with NE and poorer sleep quality would have more dysregulated immune responses and higher rates of adverse outcome. We aimed to evaluate the association of sleep quality with measures of systemic inflammation and outcomes in NE.

Methods:
Continuous aEEG recordings were collected on all patients undergoing therapeutic hypothermia for a minimum of 72 hours. Burdjalov (2003) scoring system for sleep quality was applied to these recordings. Whole blood was collected from infants with NE during the first week of life. A panel of 12 pro and anti-inflammatory cytokines were evaluated. Barkovich scoring system was applied to MRI imaging to determine adverse outcome. Statistical analysis employed independent t-tests and Spearman correlation coefficient.

Conclusion:
Infants with NE and better sleep quality had less dysregulated systemic inflammation and were at lower risk of adverse outcome. Modulation of the circadian rhythm in patients with NE may have an immunomodulatory role and lead to improved outcomes. 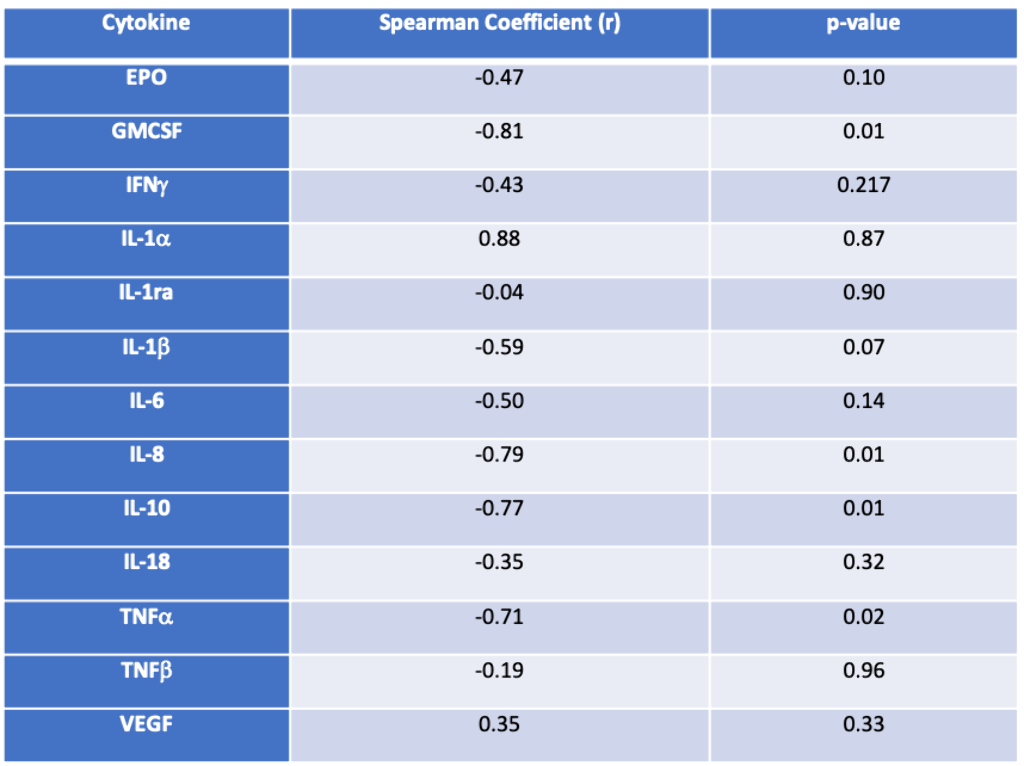 CEREBROVASCULAR AUTOREGULATION IN NEONATES WITH HYPOXIC-ISCHEMIC ENCEPHALOPATHY DURING THERAPEUTIC HYPOTHERMIA.

Background: Despite therapeutic hypothermia, hypoxic-ischemic encephalopathy (HIE) is a major cause of permanent brain injury, possibly aggravated by impaired cerebrovascular autoregulation inducing further cerebral hypoxic injury after birth. The aim of this study was to determine the incidence of and factors associated with impaired cerebrovascular autoregulation in hypothermic infants with HIE.

Conclusion: Almost half of the infants with HIE demonstrated signs of impaired cerebrovascular autoregulation, which was associated with higher first lactate and vasoactive therapy, but not MABP or pCO2. This suggests both the severity of perinatal asphyxia and (the need for) vasoactive medication to affect cerebrovascular autoregulatory capacity in HIE infants receiving hypothermia.

Background: Hypoxic-ischemic encephalopathy (HIE) following perinatal asphyxia is, despite therapeutic hypothermia, still a major cause of morbidity and mortality. Allopurinol, a xanthine-oxidase inhibitor reducing superoxide formation, might offer add-on neuroprotection. The neuroprotective effect of allopurinol is currently investigated in the randomized placebo-controlled double-blinded ALBINO trial (NCT03162653). The aim of this sub-study was to investigate the pharmacokinetics of allopurinol and oxypurinol in the ALBINO trial.

Conclusions: The dosing regimen used in the ALBINO study was adequate as the pre-specified target exposure was met.

Introduction: India accounted >85,000 newborn deaths due to Hypoxic-Ischemic-Encephalopathy(HIE) in 2017. Annual loss of economic productivity due to HIE is estimated at USD$6.4billion. Train&Help-Babies(TaHB), multidisciplinary US-based nonprofit organization, developed+implemented comprehensive HIE therapeutic-hypoterhmia(TH)-bundle,including training of medical&nursing personnel on prevention,early recognition,management of HIE cases and equipment donation in a resource-limited hospital in India.

Aim:Implementation of "HIE-TH-bundle" on survival in newborns and estimate economic value secondary to lost disability-adjusted life years(DALYs)due to HIE.

Conclusion:With "HIE-TH-bundle", there is 25% reduction in HIE related mortality. When results are hypothetically applied to national-sample,economic benefits appear far greater when HIE-TH-bundle is implemented in stepwise manner after improving good quality basic neonatal care,provider education&reliable TH equipment use. With improvement in survival, long and short-term morbidities after HIE-TH-bundle needs to be evaluated in detail in resource-poor settings before recommending universal implementation.

LIPOPOLYSACCHARIDE-SENSITIZED HYPOXIC ISCHEMIC ENCEPHALOPATHY AND THE EFFECT OF THERAPEUTIC HYPOTHERMIA MEASURED BY MAGNETIC RESONANCE IMAGING AND SPECTROSCOPY: A STUDY IN NEWBORN PIGLETS

Therapeutic hypothermia (TH) is standard treatment of neonatal hypoxic ischemic encephalopathy. However, some studies imply that TH have no neuroprotective effect when the encephalopathy is combined with infection and inflammation. The aim of this study was to evaluate TH vs. normothermia (NT) after a hypoxic ischemic (HI) insult in newborn piglets sensitized by lipopolysaccharides (LPS).

Twenty-six piglets were included in the study. LPS from Escherichia coli were administered with a continues infusion throughout the experiment. After 4 hours of LPS infusion, a 45-minute HI insult was initiated and adjusted according to aEEG and MABP. After HI, the animals were randomized to TH or NT. Primary outcome was Lac/NAA and NAA/Cr ratios measured by MRS 14 hours after HI. Secondary outcomes were measures of MRI of brain edema (ADC), oxygenation (BOLD), and perfusion (ASL).

We found no neuroprotective effect of TH in LPS-sensitized piglets with HI brain injury; however, the current sample size is small. Final results from all animals will be presented at the congress.

The UK government has targeted a 50% reduction of birth related brain-injury by 2025. Hypoxic ischaemic encephalopathy (HIE) is the leading cause of term newborn brain-injury, with an incidence of 2.4-2.8/1000 live births. Therapeutic hypothermia (TH) improves survival and reduces disability with studies reporting better outcomes for early (<3 hours old) compared to late (3-6 hours old) treatment. We aimed to quantify temporal changes of access to immediate active TH (iATH) across the UK.

The UK-Neonatal Transport Research Collaborative identified individual hospital access to iATH, and the year equipment was commissioned. Birth rates for each UK maternity centre were obtained from national databases from 2011 to 2018 and the percentage of births with access to iATH calculated. Chi-square was used to compare time periods.

Access to iATH has increased in the UK potentially reducing HIE associated brain injury. However, 40% of UK births did not have iATH in their birthing hospital, potentially delaying optimal management. Expansion of iATH access could help reduce brain injury, improve neurodevelopmental outcomes and achieve government ambitions. 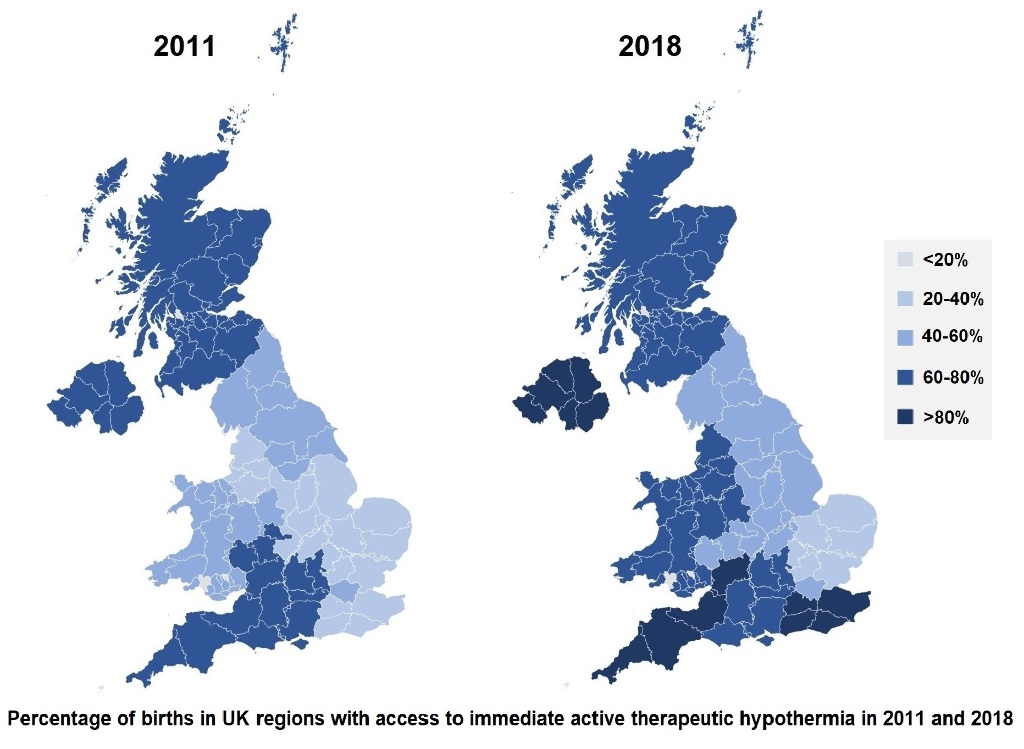