40 T90 and 48 CapBio IISs were inserted subcutaneously every other day for 2 weeks in 11 swine and connected to an insulin pump (basal/bolus pattern). After 2 weeks, the tissue surrounding the cannulas was excised and kinking within the tissue determined using micro-CT. The specimens were processed and stained with Masson’s Trichrome to assess the area of inflammation (AI) and thickness of inflammatory layer (LT) surrounding the cannula. Data were analyzed using Fisher’s Exact, ANOVA GLM, Kruskal Wallis, and post hoc Tukey HSD and Dwass-Steel-Chritchlow-Fligner tests.

The data suggest that the new cannula design of the CapBio IIS causes less tissue trauma compared to a regular 90° Teflon IIS between 2 days and 2 weeks post insertion and is resistant to kinking. These results are supportive of the objective of extending infusion set wear through changes to the material and mechanical design of traditional IIS cannulas.

INSULIN INFUSION SET USE FOR UP TO 7 DAYS: EARLY REPLACEMENT REASONS AND IMPACT ON GLYCEMIC CONTROL IN A PROSPECTIVE STUDY

The evidence for recommendations to change insulin infusion sets (IIS) at least every 2-3 days is limited. In this study, an extended indwelling time of IIS and its impact on glycemic control were investigated.

Prolonged indwelling of IIS did not have a clinically relevant impact on glycemic control. IIS tolerability was good and appeared comparable to 3-day use. An individual wearing time of up to 7 days is possible if no obvious reason for earlier change such as occlusion, adhesive failure or inflammation occurs.

This study was intended to test if a new fluid path design (H-Cap Connector) could extend the infusion set wear time. Both H-Cap extended wear set (HEWS) and control infusion set MiniMed™ Quick-set™(QS, a 3-day set worn upto 7-days in this study) were compared for percent of sets reaching 7-day use without set failure for insulin pump therapy in type 1 diabetes mellitus.

Forty subjects were recruited with a target of 20 subjects completing the study. This was a randomized, open-labeled, crossover study, with each subject being asked to wear 4 HEWS and 4 regular QS infusion sets (both from Medtronic MiniMed, Northridge, CA) until the infusion set failed or 7-day use was reached.

Four subjects did not participate beyond randomization during the study. One subject withdrew after 4 wears. There were 144 wears of H-Cap extended wear set and 140 wears of QS. When an infusion set was successfully used for 7 days, there was no increase in hyperglycemia or daily insulin requirements. After 7 days, the failure rate was 50.7% for QS and 30.6% for HEWS.

Clinical data obtained from this prospective, randomized, controlled, one site study demonstrates significant higher 7-day survival of the HEWS in comparison to regular Quick-set in this study or in previously reported study on QS in Patel et. al. study [1]. 69.4% of the HEWS used, survived 7 days. 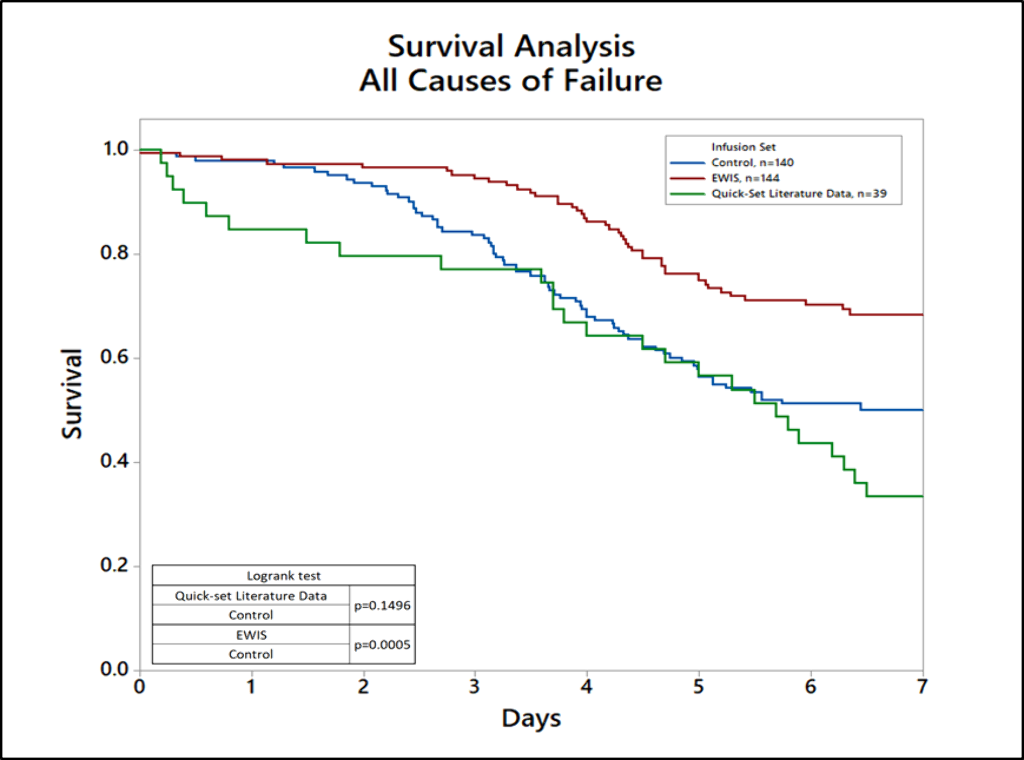 Continuous subcutaneous insulin infusion (CSII) is only FDA approved for 3 days. We believe that excipient-induced tissue reactions are responsible for the short-lived CSII functionality, skin complications and pharmacokinetic variation. The objective is to determine the role of inflammation in insulin-excipient induced tissue reaction in both murine and porcine models.

We modified the classic murine “air pouch” model to investigate CSII causes and mechanisms associated with compromised blood glucose control. The addition of an inline home-made filter also permits the removal of excipients prior to insulin infusion into the mouse air pouch. Tissue responses to insulin infusion, excipients, excipient-free insulin and control solutions (e.g. saline) over a 7-day period were investigated. These studies were also extended into a pre-clinical porcine animal model.

Our data indicate that 1) phenol-based insulin diluents trigger infusion site inflammation in both murine and porcine models; 2) that the acute inflammation alters infusion site tissue architecture and functions and 3) the resulting fibrosis eliminates future use of the same infusion site. Pharmacokinetic evaluations demonstrated that insulin absorption is delayed and maximum plasma concentration is decreased in inflamed tissue suggesting a role of inflammatory cells in insulin absorption. In-line removal of excipients immediately prior to insulin infusion minimized the loss of insulin function as well as insulin infusion associated tissue inflammation and subsequent fibrosis at CSII infusion sites.

These studies directly demonstrate the toxicity of excipients in commercial insulin formulations in both murine and porcine models.