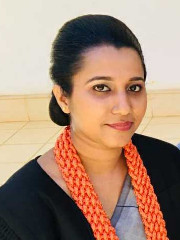 Gihani U. Vidanapathirana (Sri Lanka)
Faculty of Medicine, University of Peradeniya
Department of Microbiology
I am a Bachelor of Medical Laboratory Science, graduated from University of Peradeniya, Sri Lanka. Currently working on projects related to the identification of antibiotic resistance in medically important bacteria using molecular techniques. In addition to that, working on an epigenetics study about the association of cord blood DNA methylation with maternal BMI and GWG. I have completed the laboratory work relevant to the M.Phil research; pneumococcal colonization in health and respiratory diseases among a group of Sri Lankan children between two months to two years

Real time PCR (RT-PCR) is an alternative approach for the identification and quantification of pneumococci directly from samples.

284 nasopharyngeal swabs (NPSs) obtained from children between 2 months to 2 years of age were included; 101 were from healthy children while 183 were from children with respiratory symptoms. An RT-PCR assay targeting lytA was done alongside with culture based methods.

A standard curve was plotted using DNA from ATCC 49619 strain of Streptococcus pneumoniae with a 10-fold dilution series. RT-PCR positivity as defined by a Cq value of =< 35

There was a higher detection of pneumococcal colonization using RT-PCR.

A higher pneumococcal colonization density was detected in hospitalized children with respiratory symptoms.