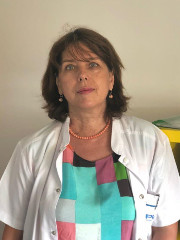 Cristina Tiu (Romania)
University Hospital Bucharest
Neurology
I have graduated the University of Medicine and Pharmacy “Carol Davila” in 1987. I have passed the board exam in 1993, I became senior neurologist in 1997, senior lecturer in 2000 and associated professor in 2006. This could be the summary of 27 years of activity, of which 24 spent in the Department of Neurology of the University Hospital Bucharest. Beyond the figures, a lot of work, enthusiasm, disappointments, perseverance, satisfactions, determination and above all the attachment to a fascinating specialty. Neurology occupies a central position, having connections with all the other medical specialties and offers the opportunity to study different fields of pathology of the peripheral or central nervous system. The field of cerebrovascular disorders has especially interested me, so I added also Neurosonology to clinical and teaching activities. In 2012 I became European Master of Sciences in Stroke Medicine (Danube University, Krems, Austria). I have organized in the past two years the national network for interventional treatment in stroke. I currently coordinate the Department of Neurology in the University Hospital Bucharest and I am the President of the Romanian Society of Neurology for the next 4 years (2021-2025).

Eastern Europe is more a political concept drawn after the second World War, which is now fading, but still has important consequences upon the development of the region. The health system is directly reflecting the economic differences between the Eastern European countries, but also social and cultural differences, starting with the concern of each individual for his own health and ending with the governmental decisions regarding health expenditure per capita. Depending of the number of countries we include, we largely speak about more than one million strokes per year, of which we aim to treat 5% by endovascular treatment and 15% by intravenous thrombolysis, 9 years from now, according to the Stroke Action Plan for Europe, 2018-2030. Where do we stand now? Few Eastern European countries have a national stroke registry and in many of these countries revascularization treatment have just began less than 5 years ago, and the rate is less than 1.5%. More precise data have been collected in the RES-Q registry. The costs of developing an EVT network are an important barrier, but an even greater obstacle is the lack of human resources. Both sides must be addressed, with a special attention for training neuro-interventional specialists, because, if sometimes money can become suddenly available, it takes at least two years to train a person, in a high volume stroke center, which are in a limited number. Efforts must be made by the medical community to offer accurate databases and to increase the number of neurointervenional specialists.