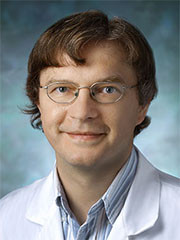 Miroslaw Janowski (United States of America)
University of Maryland, Baltimore
Diagnostic Radiology and Nuclear Medicine
Dr. Janowski is a neurosurgeon by training and for over a decade is involved in developing the field of image-guided neurointerventions. He co-invented MRI-guided BBB opening, PET-guided drug delivery to the brain, advantages of intra-arterial delivery of extracellular vesicles to the brain, and method of hydrogel labeling using manganese. Based on his patents and know-how, he has co-founded two start-ups: IntraART and Ti-com. He grew up scientifically at Johns Hopkins University. During that tenure, he co-founded Society for Image Guided Neurointerventions (SIGN), which organized two conferences just before the COVID-19 pandemic in Warsaw, Poland, and Baltimore, USA. In 2019, he was recruited by the University of Maryland, Baltimore, and is establishing a Program in Image-Guided Neurointerventions (PIGN), which mirrors a mission of SIGN. NIH continuously funds his research since 2013, and he has published over 100 papers, which were cited nearly 3000 times over his entire academic career. He is also a great contributor to the community, and this year (2021), he has received the Outstanding Reviewer Award from the STROKE journal. An image-guided approach based on real-time MRI was also instrumental in developing a novel, endovascular model of stroke in pigs, resembling clinical settings of stroke treatment by thrombectomy.

We are witnessing an enormous impact of endovascular clot removal on outcomes of eligible patients with stroke. This procedure restores blood flow and provides an opportunity for drug delivery to the infarcted area to improve outcomes further. It is particularly compelling to merge mechanical thrombectomy (MT) with intra-arterial drug infusion as a one-stop-shop procedure. Additionally, there is a rapid growth of thrombectomy-capable centers, which may allow to readily use of an intra-arterial route to deliver drugs at a large scale also to MT-ineligible patients, which suffer from a scarcity of therapeutic options. Therefore, there is an urgent need for a highly clinically relevant model capable of restoring blood flow to the infarcted brain to study the therapeutic effect of a variety of potential therapeutic agents. Lisencephalic rodent brains with a low white to gray matter ratio are relatively poor predictors of clinical translations. On the other side, primate and canine stroke models are poorly accessible, prohibitively expensive, and ethically questionable. The pig is the most extensively used large animal in biomedical research. Still, it was not possible to create a porcine model of stroke permitting restoration of blood blow – an condicio sine qua non to recapitulate the current clinical setting due to the rete between extracerebral and intracerebral circulation. We have demonstrated that intra-arterial infusion of thrombin produces a stroke through clot formation, which can be readily dissolved to restore blood flow. Then, we have shown the utility of this model in testing the therapeutic effects of glycolic acid.