Inflammatory signaling in the pathogenesis of MDS (ID 17) 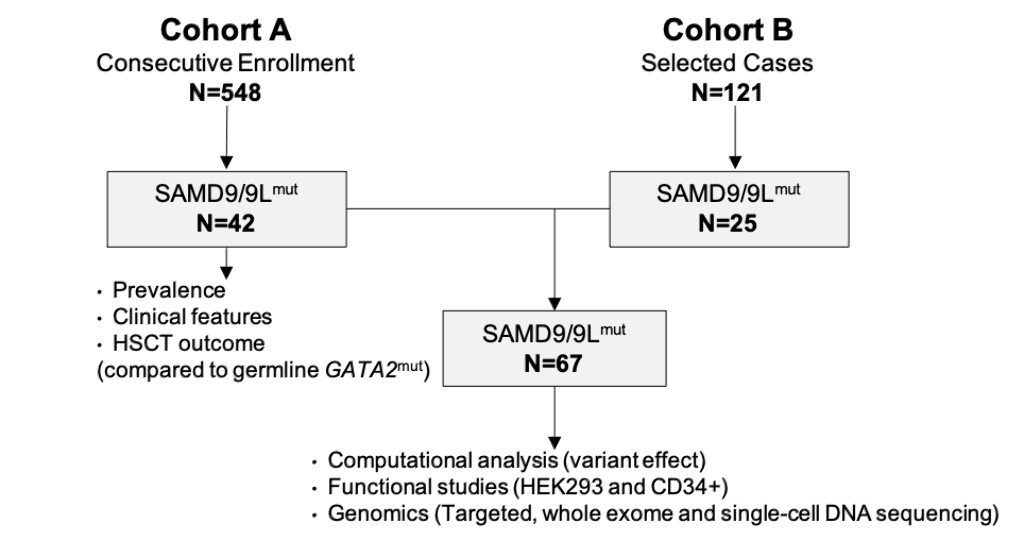 Mutually exclusive germline SAMD9/9Lmut or GATA2mut were detected in 8% or 7% of consecutive pediatric MDS, and 21% or 30% of monosomy 7 subgroup. Germline SAMD9/9Lmut predominantly associated with refractory cytopenia of childhood and did not negatively affect prognosis and outcome after hematopoietic stem-cell transplantation. In total, we identified 67 patients with 58 germline SAMD9/9Lmut clustering to protein middle region (>90% causing growth arrest in HEK293 cells) and 16 somatic SAMD9/9Lmut. Using a population genomics approach, we discovered SAMD9/9L disease-specific phenotypes to correlate with germline mutations that are either absent or ultra-rare (<0.005%) in population. Bulk and single-cell DNA sequencing revealed somatic genetic rescue (SGR) events causing loss or inactivation of germline SAMD9/9Lmut in 61% of patients. Among those, half (51%) had SGR clones with adaptive potential (revertant UPD7q, somatic SAMD9/9Lmut), while 95% had maladaptive SGR (monosomy 7 alone or with cancer mutations). The discovery of multiple competing SGR events in single patients highlights the strong negative selective pressure of SAMD9/9Lmut.

SAMD9/9Lmut cause a predisposition syndrome with highest rates of rescue clonal hematopoiesis discovered in humans and exemplify the extreme plasticity of hematopoietic system early in life.

The diagnosis of MDS is based on invasive cytomorphological analysis of peripheral blood and bone marrow cells. Much research has been conducted on the molecular mechanisms and epigenetic pathways in MDS and their prognostic and therapeutic significance, but few studies on the importance of miRNA in MDS.

Levels of selected miRNAs were determined in plasma samples of 20healthy volunteers and 41 untreated MDS patients diagnosed at the Department of Hematology at Merkur University Hospital.

Significant differences between the tested group and healthy control level of miR-99b show an increased level in the subjects compared to the control by 4,521 times (P = 0.004).

There were significant negative correlations between the level of miR-125a and the number of RBCs and hemoglobin. miR-99b significantly positively correlated with WBC count.

The highest mean level of miR-99b and miR-125a were in the group of higher-risk MDS patients.

Despite the limitation of the study with small numbers of MDS patients, these results suggest the possible importance of miR-99b as a diagnostic marker in MDS, while both miR-99b and miR-125a could serve as valuable noninvasive prognostic parameters.

The Immune pathogenesis of MDS (ID 21)