Session Type
Parallel Session
Date
Mon, 20.06.2022
Session Time
15:20 - 16:35
Room
Birchwood Ballroom
Chair(s)
Session Description
Please note: Each presentation is followed by about 3 minutes of Q&A. The audience is encouraged to send questions to the speakers from the beginning of their presentations. Q&A time is included in each speaker’s presentation duration, accounting for at least 25% active learning for the maximum registrants anticipated.

Genomic surveillance of pneumococci promises to revolutionize how we trace the global spread of strains, detect resistance, and make decisions on how to control disease. However, complex and cumbersome methods, barriers to data integration, and reproducibility issues with currently used genotyping schemes have prevented the translation of technological innovation into the clinic.

Our core method, PopPUNK, uses a machine learning approach to produce a stable, consistent genotyping scheme reflecting pneumococcal population biology. We have extended this software to use customised genome sketching techniques to enhance its flexibility, scalability, and portability. We also provide a machine-learning based approach for determining susceptibility to antimicrobials.

We have defined the structure of the pneumococcal species by applying our method to over 50,000 globally sampled genomes. Users can rapidly integrate their own sequences into the context of this global population, directly from the browser, and visualise the results without the need for bioinformatics expertise. Phylogenetic analysis of sub-populations, for example to determine outbreak characteristics, has also been optimised and automated. Unlike some other platforms, users will not be required to give away any rights to their data, and sequence data never leaves the local machine.

Our software suite empowers local epidemiologists to perform analysis onsite, regardless of prior expertise, available computational resources, or location.

We demonstrate that population sequencing can accurately identify instances of multiple colonization and antimicrobial resistance elements. The increased resolution detected a greater prevalence of the invasive serotype 1 during carriage, and an elevated rate of transmission from mothers to their children in the first year of the child’s life. Accurate data on the administration of antimicrobials indicated that infants were at risk of both the acquisition and colonization of a multi drug resistant bacterium following antimicrobial treatment. Rates of co-colonisation imply that in the absence of treatment, susceptible lineages outcompete resistant lineages within the host.

The improved resolution and additional insights into co-colonisation, antimicrobial resistance, within-host selection and transmission indicate that deep within-host population sequencing can provide a general approach to enhance the genomic surveillance of S. pneumoniae and other pathogens.

We identified host genetic variants in PPFIA2 (which encodes a protein involved in cell adhesion, integrin expression, and cell-matrix interactions) are associated with pneumococcal carriage. Further studies confirming this association and the biological role in pneumococcal carriage are needed.

Sustaining herd protection via reduced-dose schedules of pneumococcal vaccine may ameliorate some of the associated costs but necessitates a better understanding of Streptococcus pneumoniae (Sp) transmission. We ran a pilot study to explore a phylogenetic approach for detecting pneumococcal occurrence and direction of transmission.

Five putative transmission pairs and their same days’ nasopharyngeal swabs were selected from a longitudinal household study of asymptomatic carriage. Deep-sequencing of the infecting Sp populations was performed from culture sweeps and the direction of transmission was inferred using Phyloscanner. Transmission bottlenecks were assessed by comparing the frequency of single nucleotide polymorphism (SNPs) within transmission pairs.

Phylogenetic clustering of all five transmission pairs was concordant with epidemiological information. The concordance of the direction of transmission inferred from phylogenies and from epidemiological criteria depended on the genome fragment size and the minimum number of SNPs included; with seemingly increasing concordance if phylogenetic inference is based on longer fragment sizes. In 4 of 5 instances, the putative source of transmission had higher number of unique SNPs than the recipient.

This study is one of the first to attempt inference of transmission directionality from bacteria using whole-genome NGS data. While our sample size was small, we show promise for detecting linked pneumococcal infection and their direction of transmission, particularly if read length is high.

Metabolic flexibility is a prerequisite for successful transition of Streptococcus pneumoniae (Spn) from colonizing to invasive state. The aim of this study was to investigate the common metabolic features of pneumococcus invasive strains and propose vaccine candidate antigens.

Carbohydrates and aromatic amino acids metabolism pathways are involved in the regulation of cellular processes and phenotypic features of pneumococcus, including virulence. We achieved the list of vaccine candidates, which must be confirmed by reverse vaccinology.

We calculated the weight for each serotype as the ratio of percentage of the serotype in the carriage data to its percentage in all invasive cases, during the pre-vaccine era 1998-2000, in the US. We applied the weights to the accessory gene absence/presence matrix for each sequence in the invasive dataset (n = 11,784), after we conducted a bioinformatic pipeline to generate the set of accessory genes existing in 5% to 95% of the bacteria population.

The proper weight system can adjust invasive disease datasets to represent the genomic components of the carriage population of Streptococcus Pneumoniae. Our methods enrich the value of genomic sequences from invasive disease surveillance, as it is common, easy to collect, and of direct interest of public health.

Recombination has shaped the evolutionary history of Streptococcus pneumoniae, allowing rapid adaptation to interventions. Pneumococci can undergo recombination through natural competence – a state in which bacteria can uptake DNA from the environment. Recombination frequencies vary considerably across pneumococcal populations; yet the underlying mechanisms for these variations are not well understood.

We sought to elucidate differences in transformation frequency and the underlying genetic mechanisms among strains from two distinct phylogenetic clades of Serotype 3 belonging clonal complex (CC) 180 and a well-characterized non-CC180 comparison strain D39. To this end, we performed in-vitro competence assays and measured differential expression of early and late competence genes using RNA-sequencing. 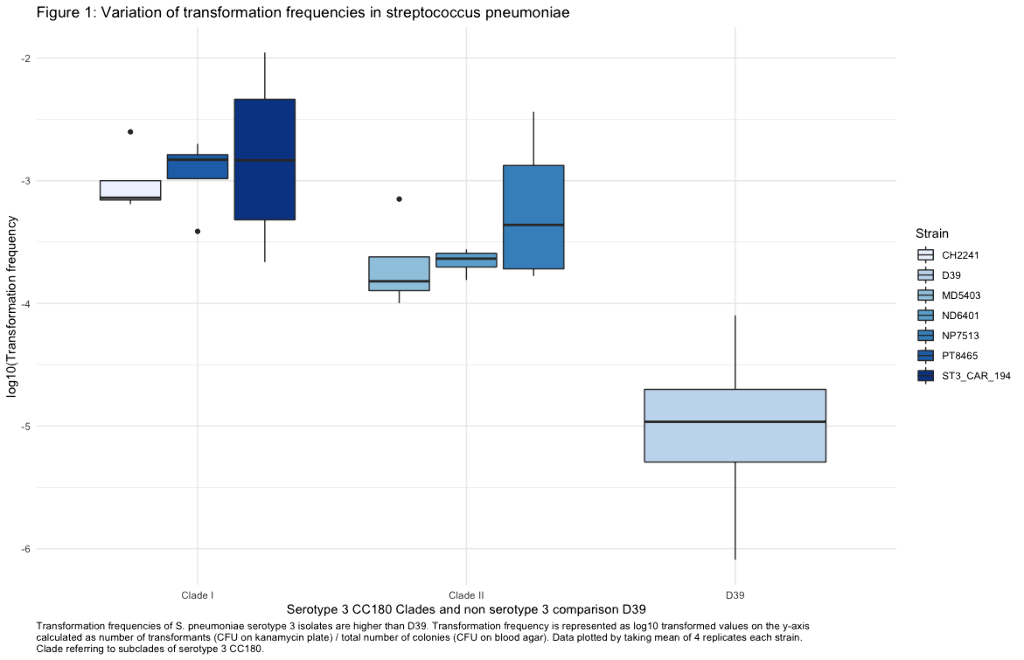 We show that there is considerable variation in competence even among closely related strains and that this variation may be the result of subtle genomic differences.