Session Type
Parallel Session
Date
Mon, 20.06.2022
Session Time
15:20 - 16:35
Room
Grand Ballroom West
Chair(s)
Session Description
Please note: Each presentation is followed by about 3 minutes of Q&A. The audience is encouraged to send questions to the speakers from the beginning of their presentations. Q&A time is included in each speaker’s presentation duration, accounting for at least 25% active learning for the maximum registrants anticipated.

Despite a likely high disease burden, pneumococcal conjugate vaccines (PCVs) are rarely used in humanitarian crises. Routine immunization is rarely feasible, and there is little evidence on alternative delivery strategies. We aimed to identify strategies that quickly reduce and sustain low transmission of vaccine serotypes.

In a camp for internally displaced persons (IDP) in Somaliland, we conducted a nested carriage and contact survey to parameterise a transmission model assessing the potential effect and optimal age targeting of PCVs campaigns. We extrapolated this model to other representative humanitarian crises settings: an acute-phase IDP camp, a protracted crisis in a rural setting, and an urban setting with mixed IDP and host communities. For each we explored the impact and efficiency of campaigns with different target age-groups and dosing-strategies.

Results from the carriage and contact survey are reported in another abstract. For the Somaliland IDP camp our model projects that a single PCV campaign including children <5 years can temporarily establish substantial herd-protection, avoiding 33% of infant vaccine type infections in in the 5 years following the campaign. Extended age-eligibility to children up to 10 or 15 years old could further increase this impact by 49% and 60%. High migration rates and close contact with unvaccinated host populations reduce the impact and may require wider age-targeting and more frequent repeat campaigns until routine services can be (re-)established.

We show that PCV campaigns can be an effective option to reduce the burden of pneumococcal disease in humanitarian crises until routine immunisation can be implemented.

Pneumococcal disease remains a global health priority in both children and adults. Therefore, development of effective pneumococcal conjugate vaccines (PCVs) with higher valency are needed to address the increase in disease caused by non-vaccine serotypes. V114 is a 15-valent PCV containing all 13 serotypes in Prevnar 13™ (PCV13), and additional serotypes 22F and 33F. This pivotal study evaluated safety and immunogenicity of V114 when co-administered with other routine pediatric vaccines.

A total of 1720 healthy infants were randomized 1:1 to receive a 4-dose regimen of V114 or PCV13. Safety was evaluated as the proportion of participants with adverse events (AEs). Antibody responses to pediatric vaccines given concomitantly with either V114 or PCV13 were evaluated at 30 days post-infant series (7 months of age) for Pentacel™ (DTaP, Hib, polio), and at 30 days post-toddler dose (13-16 months of age) for VAQTA™, M-M-R™II, VARIVAX™, and HIBERIX™.

The proportion, nature, and maximum intensity of injection-site, systemic, and serious AEs were generally comparable between V114 and PCV13 intervention groups. Compared to PCV13, V114 met non-inferiority criteria for all concomitantly administered vaccines as assessed by antibody responses to diphtheria, tetanus, pertussis, polio, and Hib/PRP antigens in infants, as well as antibody responses to hepatitis A, measles, mumps, rubella, varicella, and Hib/PRP antigens in toddlers.

In healthy infants, V114 can be given concomitantly with other standard of care pediatric vaccines without clinical interference on the expected safety and immunogenicity performance of each individual vaccine.

Use of pneumococcal conjugate vaccines (PCVs) in low and middle income countries has been limited by vaccine price. Reduced dose schedules could benefit many children.

At 24m (primary endpoint), 1+1 schedules of PCV10 or PCV13 reduced the carriage of serotypes included in that vaccine (VT carriage) by 59% (95% CI 26-78) and 66% (42-80), respectively. At 18m, both reduced VT carriage by two-thirds. Immunologically, both offered some protection between doses (greater with PCV10 for 5/10 serotypes) and both generated a strong booster response (stronger with PCV13 for most serotypes). A 0+1 schedule of PCV10 or PCV13 also reduced VT carriage and elicited a good antibody response, albeit to a lesser extent than a 1+1 schedule.

1+1 PCV schedules at 2&12m provide protection against carriage to 24m, indicating that these schedules will be adequate to maintain herd immunity. This may be supported by a single dose at 12m for unvaccinated children.

Vaccine-induced memory B cell(MBC) composition is important for vaccine effectiveness, since different MBC subsets have distinct roles in the duration and magnitude of protection. Here, we compare the immunogenicity and phenotype of immunological memory induced by the three commonly used PCV13 infant immunisation schedules (3+0,2+1,3+1).

Thirty infants(aged 2-15 months) were stratified into 3 groups: 3+0(n=14), 2+1(n=7), 3+1(n=9). Peripheral Blood Monocyte Cells(PBMCs) and serum were collected before and 28days after the last dose of each schedule. Antibodies were assessed by ELISA. Pneumococcal serotype(PS)-specific IgM, switched Ig(swIg) and extra-germinal center(extra-GC) MBCs were enumerated with Flow Cytometry.

The number of primary doses affects the phenotype of produced MBCs, suggesting long-term effects on the induced protection as, upon antigen restimulation, IgM MBCs maintain the MBC pool whereas swIg MBCs differentiate into plasma cells. At six months of age (after 3+0 schedule), subjects were unable to establish GC-derived MBCs implying an age-related effect on germinal center formation following vaccination.

Adults (n=508) ≥50 years were randomized 1:1 and received a single dose of V116 or PPSV23; randomization was stratified by age (50–64 years, 65–74 years, and ≥75 years). Adverse events (AEs) were collected following vaccination. Pneumococcal serotype-specific opsonophagocytic activity (OPA) and IgG were measured before and 30 days after vaccination (Day 30). Primary immunogenicity objectives were to assess the noninferiority of V116 to PPSV23 for the shared serotypes and the superiority of V116 to PPSV23 for the unique serotypes.

The objective was to evaluate the immunological responses to pneumococcal conjugate vaccine (PCV) combination schedules from birth through the second year of life.

In PREVIX_BOOST, Aboriginal children previously enrolled PREVIX_COMBO, a 3-arm RCT of head-to-head standard or combined infant schedules of PCV13 (P) and/or PHiD-CV10 (S), were further randomised 1:1 to a booster dose of either +P or +S at 12-months of age. Geometric mean concentration (GMC) and proportion of children with IgG concentration above specified thresholds 6-months post-booster are reported according to _PPP+P vs _PPP+S, _SSS+P vs _SSS+S, and SSSP+P vs SSSP+P. 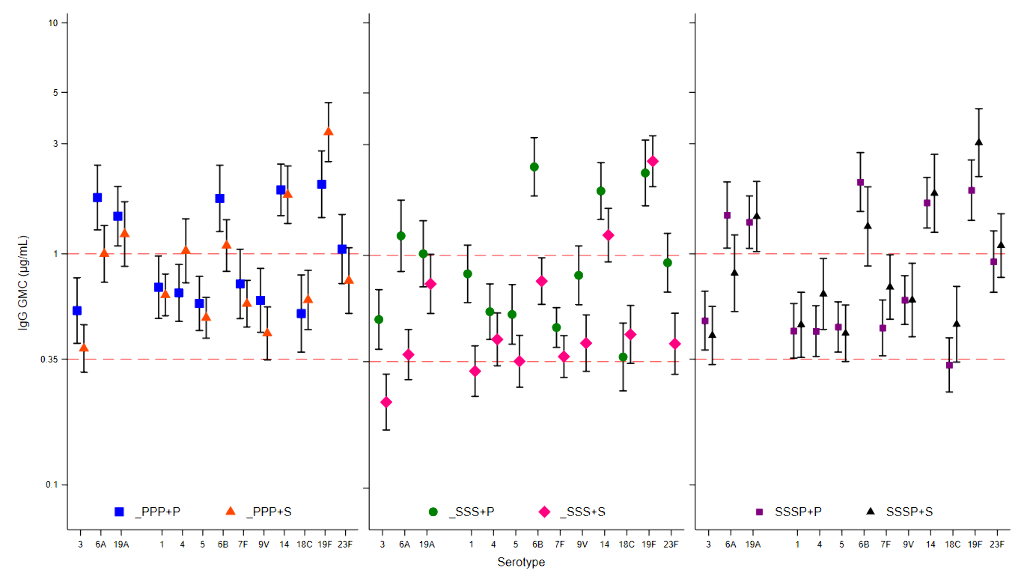 All antibody responses rapidly waned 6-months post-booster, particularly in the _SSS+S group. If the infant schedule includes PCV13, either PCV13 or PHiD-CV10 can be used as a booster. However, as PCV13 at 2 months of age is not immunogenic, PHiD-CV10 should be the first infant dose. Combined schedules offer flexibility for customising PCVs.