Session Type
Parallel Session
Date
Mon, 20.06.2022
Session Time
15:20 - 16:35
Room
Grand Ballroom Centre
Chair(s)
Session Description
Please note: Each presentation is followed by about 3 minutes of Q&A. The audience is encouraged to send questions to the speakers from the beginning of their presentations. Q&A time is included in each speaker’s presentation duration, accounting for at least 25% active learning for the maximum registrants anticipated.

Pneumococcal conjugate vaccines (PCVs) have been introduced into the infant immunization programmes across West and Central Africa. We modelled trends in numbers of meningitis cases and deaths among children before and after PCV introduction, using WHO-supported sentinel surveillance.

A total of 36,901 children under five years with suspected meningitis were enrolled at sentinel hospitals across ten West and Central African countries through the Paediatric Bacterial Meningitis (PBM) Surveillance Network between 2010 and 2016. Laboratory testing of cerebrospinal fluid (CSF) specimens was performed using standard microbiologic and molecular methods. To assess trends in disease and mortality case counts before and after 10- and 13-valent PCV introduction, we applied interrupted time-series models and random effects meta-analysis, accounting for seasonality and secular trends.

Across the countries, there was a decline of 35% (95% CI 2-57%, p=0.04) in annual suspected meningitis cases and 26% (95% CI 3-44%, p=0.03) in laboratory confirmed meningitis in the post vs. pre-PCV period; there was a non-significant decrease in suspected meningitis deaths (23% decline, 95% CI -23-52%, p=0.27) post PCV introduction. There was considerable heterogeneity in post-PCV meningitis trends among the different countries; larger and more precise reductions were observed in countries with at least 2 years post-PCV introduction surveillance.

We observed overall declines in paediatric meningitis cases and deaths, but impact was most evident in countries with a longer duration of surveillance post-PCV-introduction. The heterogeneity in the trends across the countries following PCV implementation warrants continued monitoring and surveillance.

Determining pneumonia etiology is difficult because samples from inside the lung are rarely available. We describe fatal pneumonia etiology, determined using MITS, to investigate cause of death (CoD) in children aged 1-59 months from seven countries in Africa and South Asia.

Deaths that occurred between December 2016 and February 2020 were investigated post-mortem using blood samples (tested by culture and PCR) and MITS per lung (histopathology, PCR for 44 organisms [all sites] and culture [South Africa only]). Expert panels reviewed clinical data, MITS and culture results, and verbal autopsy and assigned underlying, antecedent/comorbid and immediate (final event) CoD per WHO recommendations.

CHAMPS methods provide a new way of examining pathogen-specific causes of pneumonia death, highlighting those deaths often had multiple pathogens and Klebsiella pneumoniae may cause more pneumonia deaths than previously thought. Despite use of pneumococcal conjugate vaccines at all sites, pneumococcus still caused 32% of childhood pneumonia-related deaths.

The Child Health and Mortality Prevention Surveillance (CHAMPS) network aims to better understand child mortality causes through longitudinal surveillance and etiologic investigation of under-five deaths and stillbirths. Deaths enrolled in CHAMPS were examined to describe deaths attributed to pneumococcus by age group in seven surveillance sites all of which use pneumococcal conjugate vaccine (PCV).

These findings support focus on preventing pneumococcal disease and associated child mortality, including assessing proportion of deaths due to vaccine serotypes and factors for under-immunization with PCV.

The integrated Global Action Plan for the Prevention and Control of Pneumonia and Diarrhoea (GAPPD) was implemented by WHO/UNICEF in 2013 to end preventable childhood deaths due to pneumonia and diarrhoea by 2025. Notwithstanding, these diseases are the leading cause of child mortality globally. Therefore, this study aims to estimate the prevalence of pneumonia and diarrhoea in under-five children and investigate their demographic and socioeconomic risk factors in developing countries.

This study analysed 566,811 surviving under five-year-old children pooled from the latest round of Demographic and Health Surveys conducted in 53 developing countries. Both the bivariate analysis and logistic regression have been employed to analyse the data.

This study reveals that about 6% and 16% of children were suffered from pneumonia and diarrhoea, respectively and varied widely across the countries and major geographical regions. The higher acute respiratory infection (11%) and higher diarrhoea (19%) prevalence have been found in Latin-America and Caribbean-countries and Central-Asia/West-Asia and North-African countries, respectively than other regions. Logistic regressions reveal that several socio-demographic and economic factors are found to be significant factors for both diseases. Among them, the main risk factors are low child birth-weight, low maternal education, poverty, Latin-America and Caribbean-countries and lower-income countries, which are positively associated with both diseases.

In a follow-up to our previous literature review of publications from 2010 to 2018, we searched PubMed, Embase, and performed a backward citation search to identify relevant articles for serotypes causing IPD published between May 2018 and October 2021. Publications with at least 20 serotype isolates were included. We summarized the overall distribution of existing PCV and non-PCV serotypes and analyzed the difference in serotype distribution between Gavi and non-Gavi countries. 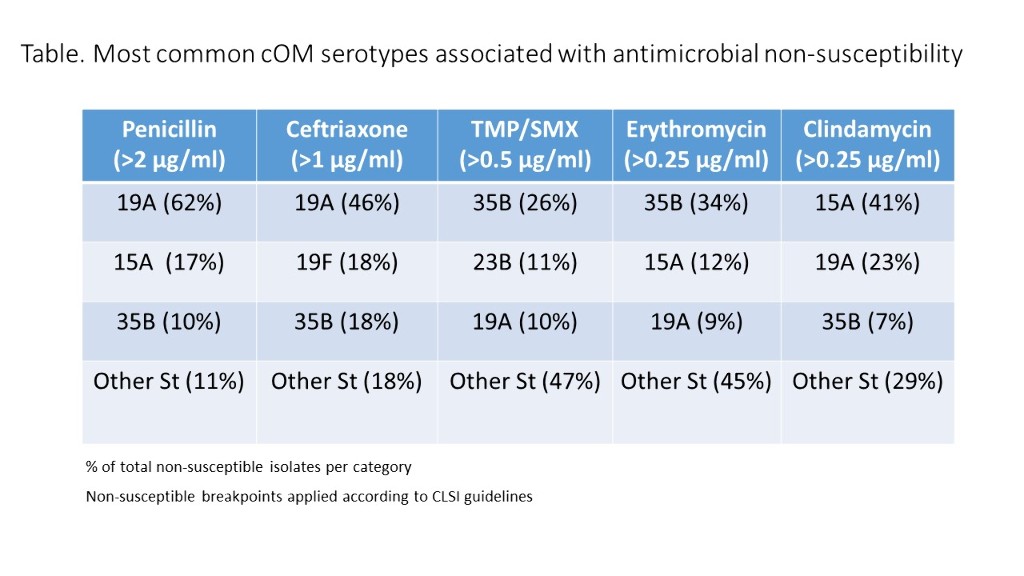 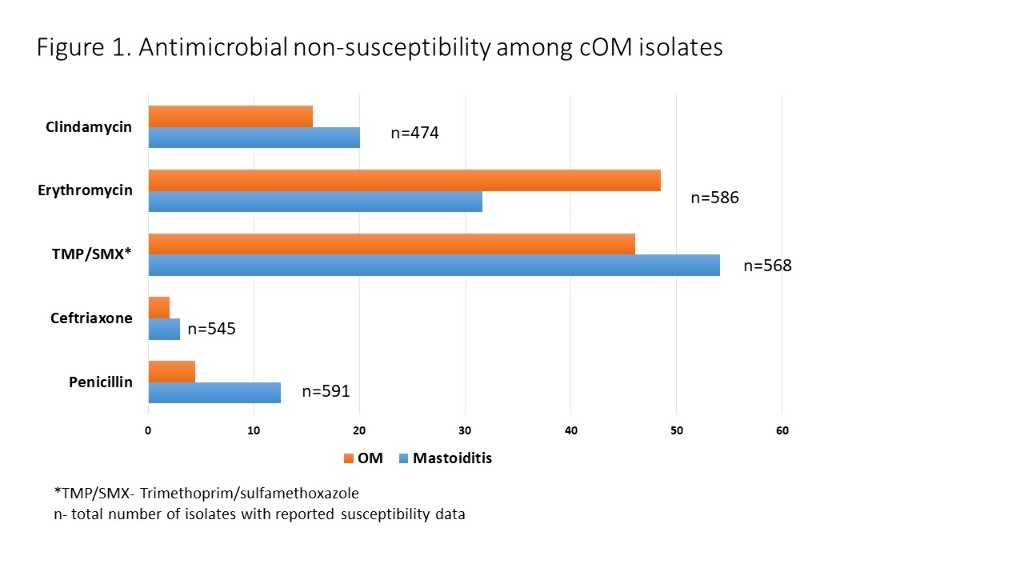 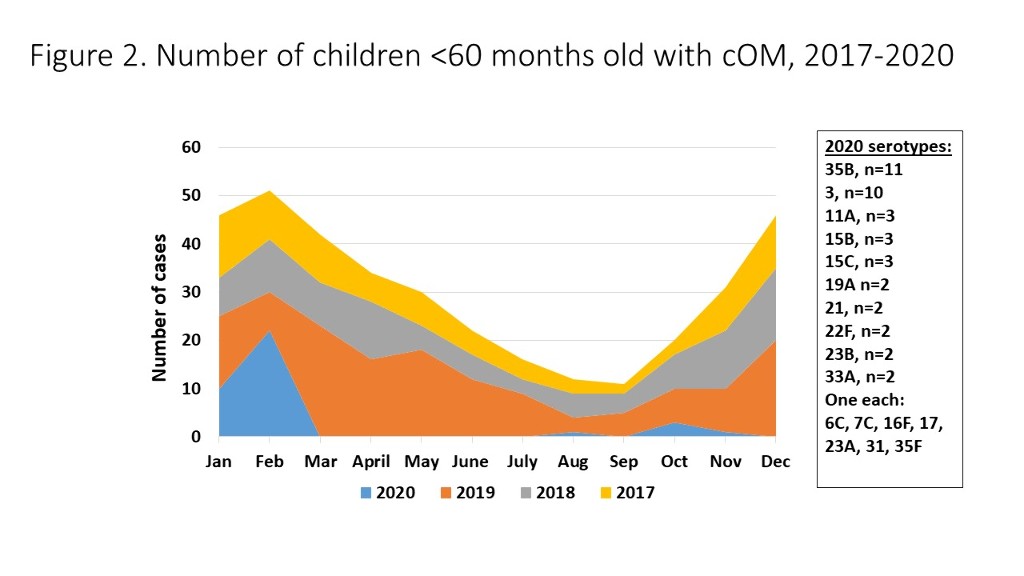 Non-PCV13 Sts caused the majority of pneumococcal cOM. rOM infections were commonly caused by different Sts. Further surveillance will determine if the decline of pneumococcal infections in 2020 was temporary and resulted in a shift in St prevalence.

PCV10 was introduced into the infant immunisation programme in Nepal in 2015. We assessed the impact of PCV10 on the pneumococcal nasopharyngeal carriage in children with pneumonia.

All children with clinician diagnosed pneumonia aged 2 months to <14 years admitted to Patan Hospital, Nepal, between March 2014-2015 (pre-vaccine), and between 2018- 2019 (post-vaccine), were included in the study. Nasopharyngeal swabs collected after informed consent were transported in STGG medium, cultured and serotyped by the Quellung method.

Nasopharyngeal carriage of PCV10 serotypes has declined in pneumonia cases after vaccine introduction. The PCV13 additional serotypes have increased but by less than 4%. This information is important when considering changing to vaccines with broader serotype coverage.