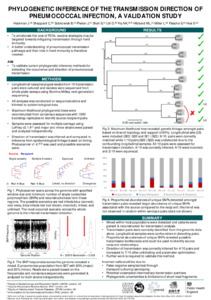 PHYLOGENETIC INFERENCE OF THE TRANSMISSION DIRECTION OF PNEUMOCOCCAL INFECTION, A VALIDATION STUDY

PHYLOGENETIC INFERENCE OF THE TRANSMISSION DIRECTION OF PNEUMOCOCCAL INFECTION, A VALIDATION STUDY (ID 719)

Based on the timing of serotype-specific carriage within a household, 10 likely transmission pairs and the corresponding transmission direction were identified from a longitudinal study of nasopharyngeal carriage in the UK and sequenced by whole genome sequencing. Any metadata were blinded, and linkage and the transmission direction inferred from the genomic data alone using Phyloscanner.

Phylogenetics did successfully predict transmission pairs in this small sample. To improve the inference of transmission direction we will consider factors including sequencing coverage, degrees of intra-host diversity, and phylogenetic uncertainty, although concordance with epidemiolocal metadata may be limited by imperfect sensitivity of culture-based tests for pneumococcal detection.