“Wear and tear”, structural changes, “inflammaging” as well as thinning of cartilage has been implemented as a reason for cartilage degeneration in aging individuals1-3, but not necessarily always associated with osteoarthritis4. While there is plenty of literature dedicated to osteoarthritis, publications dealing with aging of cartilage are relatively scarce and often from the seventies and eighties. 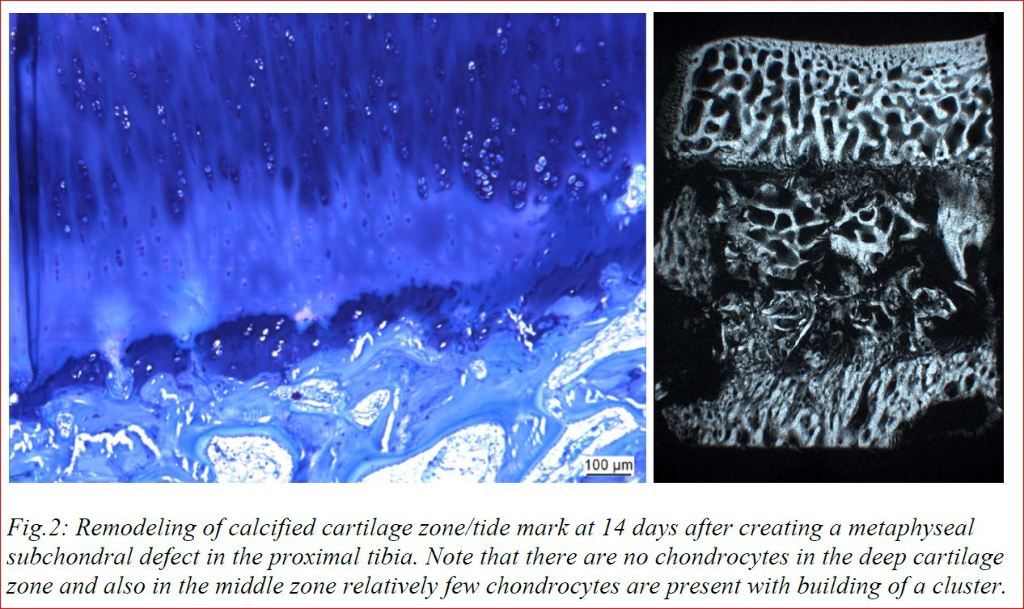 Structural changes in joint congruency were described, such that over time, joint surfaces and congruency change and adapt including thinning of the cartilage surface. Cartilage degeneration and thinning were attributed to a decreasing anabolic response of chondrocytes to damaging stimuli by increasing their matrix synthesis4. Also age dependent decreased lacunar numbers and hypermineralization of osteocyte lacunae (micropetrosis) were found in aging individuals1 as well as senescence of resident cells or changes in methylation in cartilage and subchondral bone cells with shortening of telomers and changes in epigenetics were recorded1,3,5,6.

A close relationship between subchondral bone and overlying hyaline cartilage is outlined in most of these publications, although still not really understood. One of the reasons, why this is the case and these pathways have not been pursued may be the common belief that the calcified cartilage and tidemark separate the hyaline cartilage from the subchondral bone and no connections between these unities exist in the adult individual and, furthermore, that cells within the calcified cartilage zone are compared to hypertrophic chondrocytes in the growth plate. This goes along with the still held belief that in contrast to bone, there is no permanent remodeling of the hyaline cartilage during the adult life time and that chondrocytes only remodel their immediate environment.

Our research with cartilage samples in vitro (Fig.1) and animal experiments in vivo (Fig.2) show that these views need to be revised. Cells in the calcified cartilage zone were viable and not hypertrophic (or even apoptotic). In addition, in vivo results showed that surgical removal of subchondral bone leads to immediate depletion of chondrocytes in the deep cartilage zone and cartilage degeneration, even if autografts were used to fill the bone defect in vicinity of the hyaline cartilage. Cartilage degeneration could be influenced by treatments addressing proliferation and healing capacity in the subchondral bone. These results lead us to the conclusion that only understanding the tight connection between subchondral bone and hyaline cartilage including the physiological remodeling of healthy cartilage will make it possible to influence the life span of joints without osteoarthritis.

3.3.3 - Biomarkers of Osteoarthritis and Implications for Therapy (Pre-Recorded)

Osteoarthritis (OA) is a destructive joint disease with high prevalence, representing a severe health burden and tremendous economic impact. Although cartilage destruction is the hallmark of OA, it is now appreciated that it is a whole joint disease involving changes in all joint tissues including articular cartilage, calcified cartilage, subchondral cortical and trabecular bone, joint capsule, ligaments, tendons, menisci, and the synovium (1,2). Any of these tissues may give rise to biomarkers as a consequence of joint disease, which may be detected in the synovial fluid, blood, and urine. The initiation of the disease can be attributed to direct injury and mechanical disruption of cartilage and other joint tissues, but the progressive changes are dependent on active cell-mediated processes that occur during the time course of the disease. Recent clinical observations and experimental studies have identified OA phenotypes that exhibit common profiles of symptoms, structural abnormalities, and pathophysiological pathways acting independently or in combination within a background of genetic and epigenetic factors (3,4). Multiple risk factors, including injury, aging, obesity, other metabolic disorders, and inflammation, impact on these OA phenotypes and may give insight into strategies for assigning biomarker panels that will stratify subsets of OA with distinct patterns of initiating factors and time courses of disease progression, but with similar end-stage pathology (5). Current therapies involve symptomatic relief of pain, physiotherapy, and ultimately total joint replacement after joint failure. The challenge in the search for disease modifying OA drugs (DMOADs) is that severe cartilage damage, as a critical determinant in OA progression, may not occur or may not be detected radiologically until months or years following the initiating event. Recent progress in identifying and validating biomarkers in at risk patients with early-stage disease holds great promise for impacting on the development of therapeutic approaches and the design of clinical trials.

Efforts in the OA field have been focused on developing a biomarkers toolbox, based on experimental findings to enable understanding of mechanisms of pathogenesis and how they might be translated to therapy. Biomarkers are defined as surrogates for clinical endpoints that, in the case of OA, would substitute for outcomes such as pain, functional status, or candidacy for total joint replacement (6,7). While the importance of molecular biomarkers is increasingly recognized, no OA-related biomarker has been adopted for routine use in clinical practice, thus reflecting the lack of pharmacological structure-modifying DMOADs. Insights into the pathologic and pathogenic processes associated with the initiation and progression of OA have been provided by remarkable advances in defining the composition and structural organization of articular cartilage and in elucidating the molecular mechanisms regulating the anabolic and catabolic activities of chondrocytes. Much of the search for biomarkers, therefore, has focused on adult articular cartilage, which is a complex tissue of matrix proteins with a resident population of chondrocytes that are normally quiescent and maintain the matrix in a low-turnover state. Until recently, chondrocyte phenotypes were defined according to their developmental stage, for example, as proliferating, pre-hypertophic, and hypertrophic chondrocytes, or state of maturity, i.e., articular, and fibrocartilage chondrocytes. During OA, articular chondrocytes undergo phenotypic modulation, promoting matrix destruction, abnormal attempts at repair, and apoptotic cell death. Chondrocytes in aging cartilage, particularly those in the superficial zone, become senescent, possibly as a homeostatic protective mechanism, and release proteins involved in their senescence associated secretory phenotype (SASP). There are many inflammatory markers associated with SASP, which become more prominent when OA disease is present. Of the many cartilage biomarkers under investigation, the most consistent are related to matrix degradation such as the neo-epitopes created by enzymatic cleavage of collagen, aggrecan, and COMP (6). These OA-related events may be regulated by inflammatory mediators deriving from the synovitis in the joint, but also by the low-grade inflammation in the cartilage itself. While synovium is known to be heterogeneous with many cell populations such as fibroblasts, macrophages, and immune cells, recent evidence by single-cell RNAseq showed 12 distinct OA synovial cell phenotypes (9). In contrast, the dogma that cartilage contains one dominant cell type has been upended by RNAseq analyses showing 7 distinct OA chondrocyte phenotypes, particularly during OA progression (9, 10). The study of Chou et al. (9) also predicted the upstream mediators associated with these phenotypes in either synovial tissue or cartilage, supporting the concept that cross talk between synovial cells and cartilage plays critical roles in OA.

Similarly, there have been significant advances in characterizing the structural and functional alterations in periarticular bone in OA and in defining the factors and processes that control the remodeling and adaptation of skeletal tissues to local mechanical and systemic factors (2). Thus, products of bone resorption and formation have been added to the OA biomarker toolbox (6). Since the responses of bone cells to biomechanical damage in early stages of OA may be involved in cross talk with cartilage to initiate and promote damage, it will be important to include bone biomarkers in the toolbox.

Pre-clinical studies in vitro and in vivo have led to the development and testing of therapeutic agents and treatment interventions that have the potential to slow or attenuate OA progression, but significant challenges exist in translating them for clinical use. Advances in the development of advanced MRI technologies and biomarker assays that reflect changes in the synthetic and degradation products of the cartilage matrix and bone hold promise for early diagnosis, for assessing disease progression, and for more accurately monitoring of the efficacy of disease-modifying therapies; these, however, need further validation to be of clinical utility. Currently available pharmacological therapies address pain, which remains a major cause of disability in individuals with OA and further studies are needed to define the sources and mechanisms involved in the pathogenesis of joint pain and associated pain biomarkers to assess individual patients. Therefore, there is a great need for defining sets of biomarkers that will identify individuals who are at risk at early stages for more rapidly progressing to OA with the goal of developing structure modifying drugs that also ameliorate pain. At the very least, the biomarker subsets could be used to define cohorts of OA patients with different etiologies and risk factors to enable the design of more rational clinical trials for successful translation of phenotype-specific targeted therapies. The availability of appropriate biomarkers could enhance our ability to evaluate all stages and subsets of OA with regard to diagnosis, prognosis, drug development, and treatment. Overall, the validation of biomarkers as tools for monitoring disease status and patient responses to therapy is critical for facilitating drug development for OA.

I am grateful for research grant support during the later stage of my career and ecellent collaborations: