Knowledge of determinants of prognosis after cryptogenic TIA/stroke in patients with patent foramen ovale (PFO) on medical treatment alone is essential to inform further trials on PFO-closure at older ages.

Age and RLS-size are two determinants of stroke recurrence after PFO-associated cryptogenic TIA/stroke. Trials of closure of large PFOs at older ages are justified.

We performed a genome-wide association study (GWAS) in over 10,000 ruptured and unruptured IA cases and 300,000 controls of European and East-Asian descent. To dissect the genetic architecture we used recent techniques, including LD-score regression, genetic correlation analysis, mendelian randomization, and drug target enrichment analysis.

Eleven novel risk loci were discovered. More than half of the heritability of IA can be explained by genetic variants tagged in this study, and the heritability is polygenic. The risk loci between ruptured and unruptured IA were highly similar, and the genetic correlation between these traits was nearly 100%. Heritability enrichment was found in endothelial cells. Blood pressure and smoking play independent, causal roles in IA development. Genetic correlation with other cerebrovascular traits, and other aneurysms types was found, and was driven mainly by blood pressure and smoking. Finally, an enrichment of genetic association was found in genes targeted by anti-epileptic drugs. 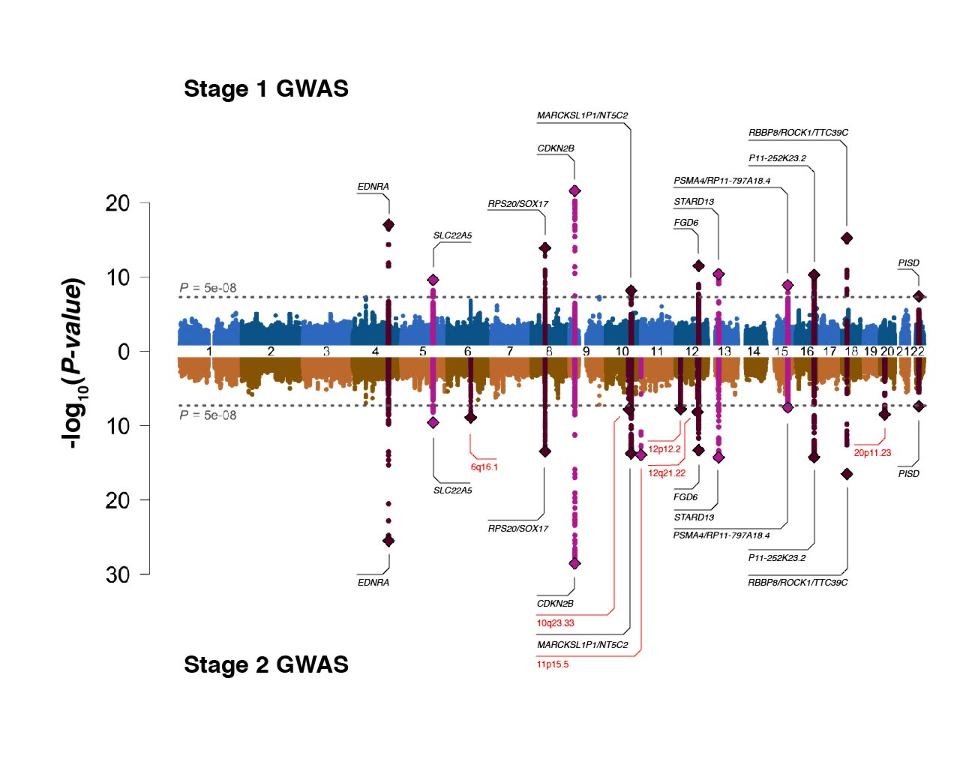 This study identified 17 risk loci for IA, including 11 novel ones and showed strong evidence for a polygenic architecture. The main genetic drivers of IA development and the genetic overlap with stroke-related traits are the clinical risk factors blood-pressure and smoking. This study provides a major advance in the pathogenesis of IA, and provides novel insights in the pathophysiology as well as potential treatment options.

Following acute ischemic stroke (AIS) onset, neurological deficits can be highly unstable within the first 24 hours. We hypothesized that early change (ΔNIHSS=NIHSSbaseline–NIHSS24hours), could serve as a quantitative phenotype to capture the genetic architecture of ischemic brain injury.

AIS patients were prospectively enrolled between 2008-2019 at 7 sites (N=4,876). NIHSS scores were obtained within 6 hours and at 24 hours after stroke onset. Genotyping was generated and imputed. ΔNIHSS was used as a quantitative trait in an association model, with baseline NIHSS, age, sex, PCA1, PCA2, TOAST classification and genotyping round as covariates. All samples were analyzed by site. Fixed effect meta-analysis was used to collapse each ethnic group and a trans-ethnic meta-analysis to collapse all ethnicities. GWAs hits were functionally annotated with bioinformatics tools. Finally, the genetic architecture overlap between ΔNIHSS and stroke risk was explored.

Variance analyses revealed that 6.86% of the variance of ΔNIHSS is explained by genetics. We found eight GWAS significant locus–Figure 1. After deep functional annotation and Mendelian randomization analyses, we identified ADAM23, GRIA1 and ABCB5 as the main driving genes; being the first two expressed in neurons according to our single-nuclei RNAseq dataset (70 brains and 100,000 cell nucleus). We did not find any significant genetic overlap between ΔNIHSS and stroke risk. 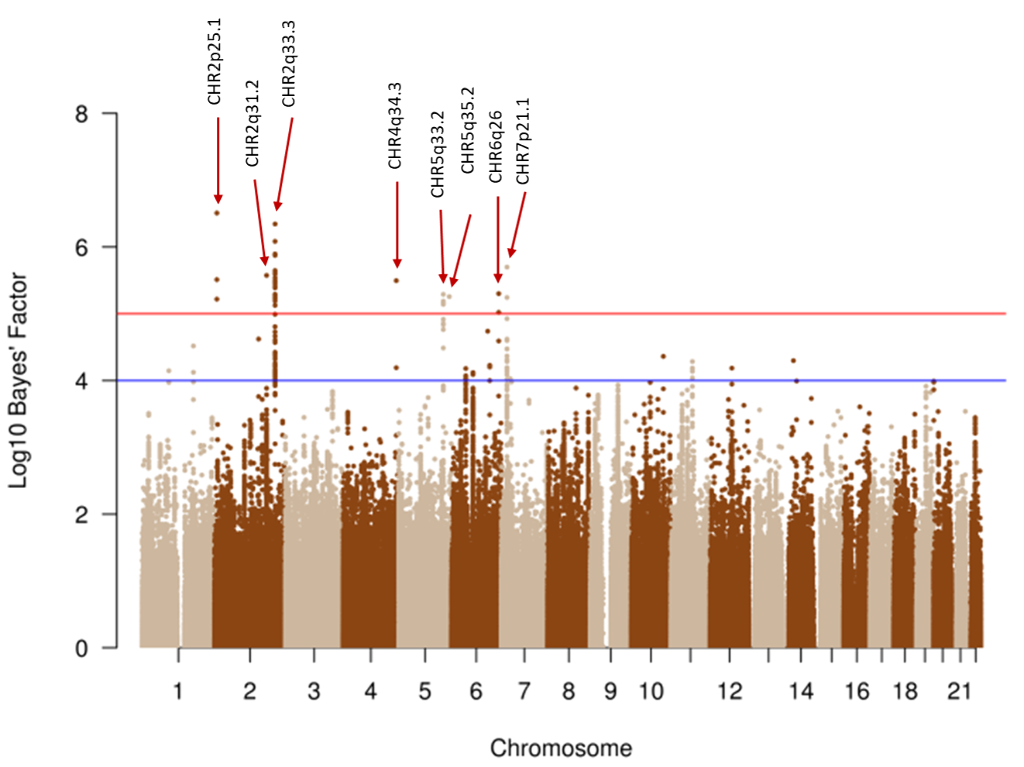 Early neurological outcome after AIS is influenced by genetics, but does not share the same architecture as stroke risk. ADAM23 and GRIA1 appear to play a role in modulating trans-synaptic excitability, suggesting a role in excitotoxicity in the setting of AIS.

on behalf of the Microbleeds International Collaborative Network

Balancing the risks of recurrent ischaemic stroke (IS) and intracranial haemorrhage (ICH) is an important consideration in patients treated with antithrombotic therapy after ischaemic stroke or transient ischaemic attack; however, existing predictive models offer limited performance, particularly for ICH. We aimed to develop new risk scores incorporating cerebral microbleeds, an MRI biomarker of ICH and IS risk.

We developed Cox regression models using data from the Microbleeds International Collaborative Network of prospective observational studies, selecting variables for inclusion on biological relevance and availability. We excluded participants not taking antithrombotics, missing necessary variables, or from heterogeneous centres, leaving 14,526 participants from 36 centres and 13,598 participants from 33 centres with follow-up for ICH and IS respectively. Models were simplified using backward elimination at p > 0.2, and regression coefficients scaled and rounded. We validated our models internally using bootstrapping, and compared predicted to observed risk using Kaplan-Meier plots. 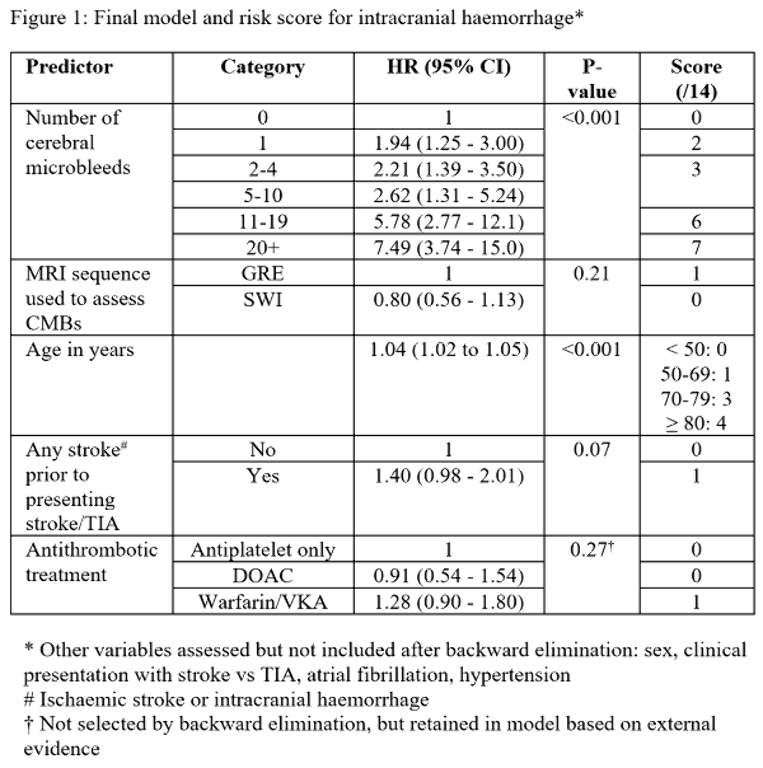 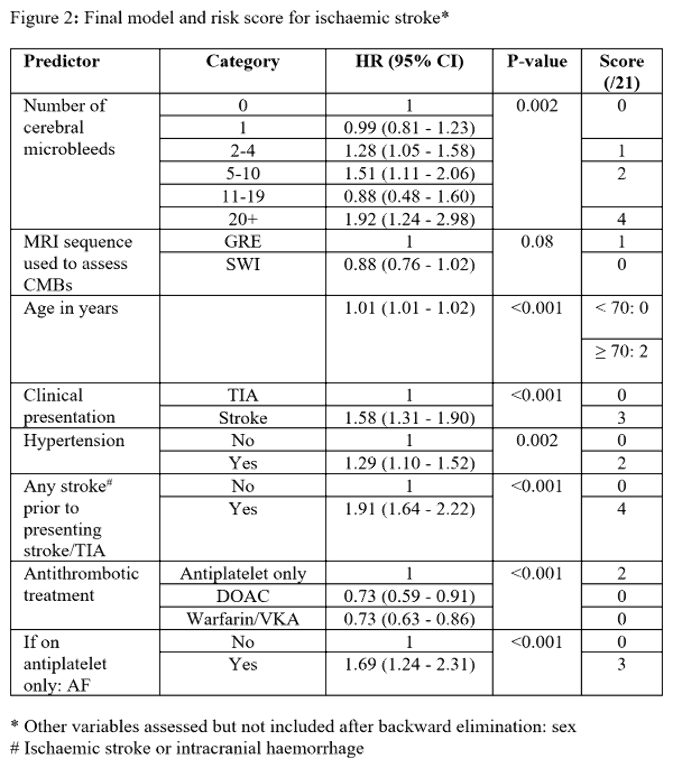 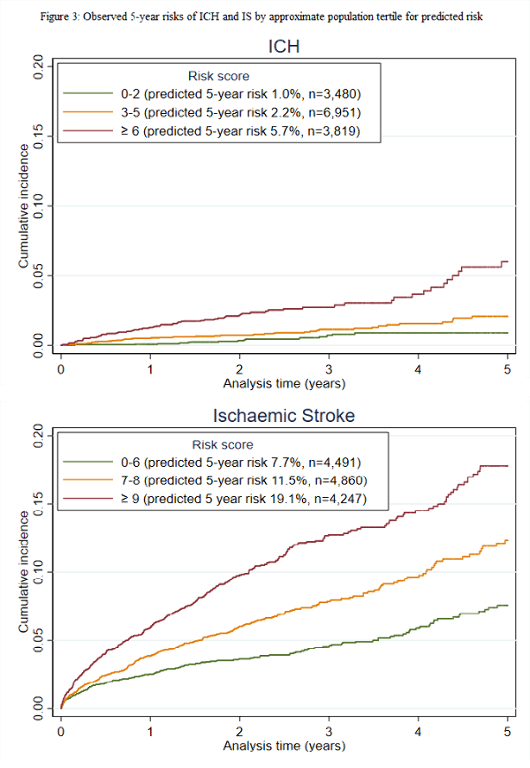 A score incorporating cerebral microbleeds offers good discrimination and excellent calibration for predicting ICH. Only a few patients had a higher predicted risk of ICH than IS. External validation and direct comparison with existing risk scores is required.