EFFICACY OF FLUOXETINE – A RANDOMIZED CONTROLLED TRIAL IN STROKE (EFFECTS)

On behalf of the EFFECTS trial Collaboration

Trials have suggested that fluoxetine might improve recovery after stroke. EFFECTS (Efficacy oF Fluoxetine – a randomisEd Controlled Trial in Stroke) aimed to determine whether routine administration of fluoxetine for 6 months after acute stroke improves patients’ functional outcome. 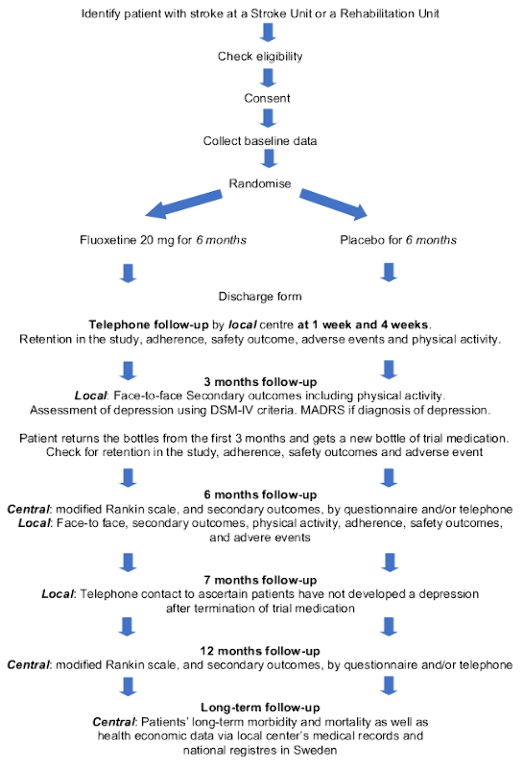 EFFECTS included patients between 20 October 2014 and 28 June 2019. A total 1,500 patients were recruited from 35 centres in Sweden (figure 2-3). Cleaning of data is ongoing. We will lock the database in February 2020, thereafter, break the code, and report the primary outcome (modified Ranking Scale at 6 months) at the ESO-WSO 2020 Conference. 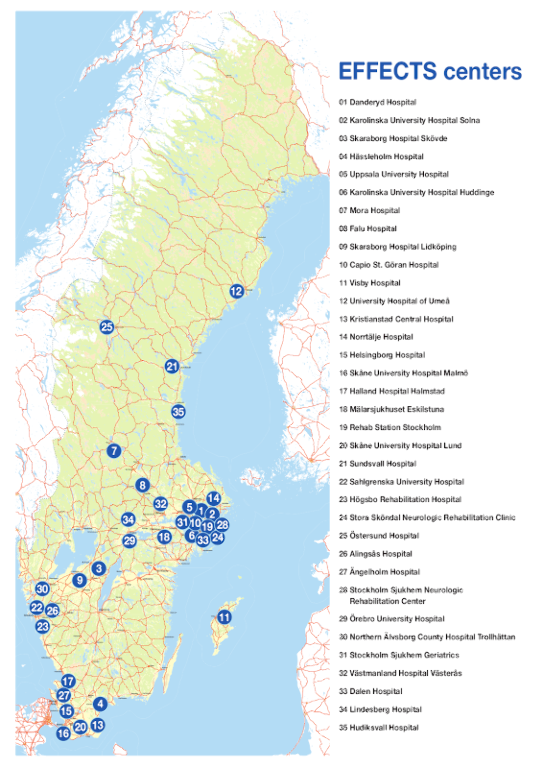 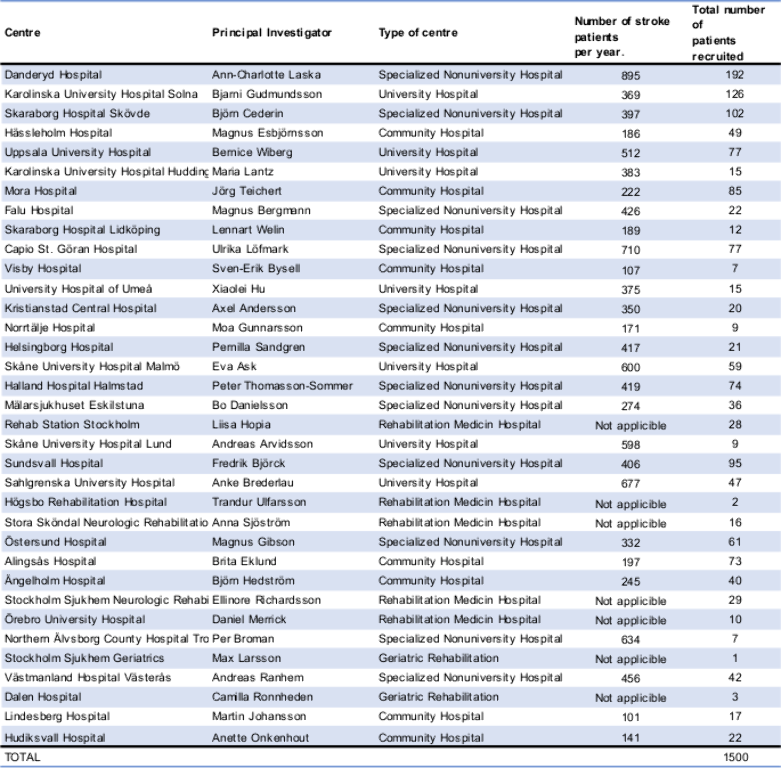 EFFECTS will provide an estimate of the safety and efficacy of fluoxetine after ischaemic and haemorrhagic stroke on functional recovery and other secondary outcomes. The results will also be included in updated Cochrane systematic review, and individual patient data meta-analysis.

Trials of the selective serotonin reuptake inhibitor (SSRI), fluoxetine, for recovery after stroke have reported conflicting results. We aimed to determine if the use of fluoxetine over 6 months after recent acute stroke improves functional recovery.

The AFFINITY study was an international, double-blind, placebo-controlled, randomised trial in Australia, New Zealand, and Vietnam. Eligible participants with an acute stroke in the previous 2-15 days that resulted in residual neurological impairment (modified Rankin scale [mRS] score >0) were randomised centrally to fluoxetine (20mg daily) or matching placebo capsules, once daily, for 6 months. The primary outcome was a shift in the mRS score, determined by the simplified mRS questionnaire, at 6 months.

Between 11 January, 2013, and 30 June, 2019, 1280 patients were recruited at 43 sites in Australia (532 patients; 29 sites), New Zealand (42 patients; 4 sites) and Vietnam (706 patients; 10 sites), and randomised to 6 months treatment with fluoxetine or placebo. Follow-up at 6 months completed on 30 December, 2019. The primary outcome results will be presented, comparing mRS scores at 6 months for each treatment group by ordinal logistic regression, and for pre-defined subgroups, including country, stroke pathology, stroke severity, age, prior depression, and current cognitive deficits. The incidence of secondary outcomes, including new depression, seizures, and bone fractures, in each group will also be presented.

The AFFINITY trial results will determine whether fluoxetine improves post-stroke functional outcome in a broader Asian/non-Asian population, and add to a future individual patient data meta-analysis including the FOCUS and EFFECTS trials.

TIGAGRELOR AND ASPIRIN VERSUS ASPIRIN ALONE IN ACUTE ISCHEMIC STROKE AND TIA: RESULTS OF THE THALES TRIAL

Dual Antiplatelet therapy with ticagrelor and aspirin may be more effective than a single antiplatelet agent in reducing the high risk of stroke or death after an acute ischemic stroke or TIA.

The Acute STroke or Transient IscHaemic Attack Treated with TicAgreLor and ASA for PrEvention of Stroke and Death (THALES) trial was a randomized, double-blind trial in patients within 24 hours after acute ischemic stroke or TIA (NCT03354429). Participants had a non-cardioembolic ischemic stroke (with a National Institutes of Health Stroke Scale score ≤5) or high-risk TIA (defined as an ABCD2 score ≥6 or with ipsilateral large vessel stenosis ≥50%). They were randomized to ticagrelor (180 mg loading dose on day 1 followed by 90 mg twice daily on days 2-30) or to matching placebo, and all also received open-label aspirin (300-325 mg on day 1 followed by 75-100 mg once daily on days 2-30).

Overall, 11,016 participants were randomized at 414 international sites. The median age was 65 years and 39% were women. Based on pre-final data, stroke or death (primary efficacy outcome) occurred in 665 (6.0%) overall, and 35 (0.3%) experienced a severe bleeding event by GUSTO criteria (primary safety outcome) at 30 days. Database lock will occur in mid-January and the complete primary results will be presented with planned simultaneous publication.

The THALES trial will provide important information about the efficacy and safety of ticagrelor plus aspirin in patients with acute ischemic stroke or TIA.

Uncertainty exists regarding the added value and risks of intravenous alteplase treatment initiated before endovascular thrombectomy (EVT). We undertook a randomized trial to determine whether direct EVT is non-inferior to standard treatment (EVT preceded by 0.9 mg/kg intravenous alteplase) in patients with acute ischemic stroke due to an anterior circulation large vessel occlusion.

DIRECT-MT is a randomized, open label clinical trial with blinded outcome assessment (Int J Stroke 2019; DOI: 10.1177/1747493019882837). The primary effect parameter is the common odds ratio for a shift in the direction of better outcome on the modified Rankin Scale at 90 days, adjusted for prespecified prognostic factors and estimated with ordinal logistic regression. Non-inferiority is established when the lower boundary of the corresponding 95% confidence interval of the primary effect parameter was equal or larger than 0.8. Baseline data will be presented according to treatment allocation with descriptive statistics as appropriate. All analyses concerning the primary, secondary and safety outcomes will be performed in the intention-to-treat population.

A total of 656 patients were included from 41 Chinese academic tertiary centers. Blind assessments of primary outcome, severe adverse events and imaging were also completed. Database was locked on the 30th of October 2019. Analysis was performed according to a prespecified statistical analysis plan completed on the 21st of October 2019 available on https://www.direct-mt.com.

Final results regarding primary, secondary and safety outcomes will be presented at the conference.

We randomly assigned patients to BMM plus EVT (the EVT group) or to BMM alone (the control group). EVT had to be feasible within 6 hours of estimated time of BAO. Primary endpoint was a favorable functional outcome of 0 to 3 on the modified Rankin scale (ranging from 0 (no symptoms) to 6 (death)) at 90 days. The primary safety endpoints were symptomatic intracranial hemorrhage and the overall mortality at 90 days.

The trial was discontinued after randomization of 300 patients. There was an absolute difference of xx% in favorable functional outcome in favor of endovascular therapy (xx% vs. xx%; risk ratio, x.x; 95%CI, x.x to x.x). At 90 days, the rates of symptomatic intracranial hemorrhage was x% in the EVT group versus x.x% in the control group (RR=xx, 95% CI), and rates of death were xx% and xx%, respectively. Screening log data indicated that in randomizing centers xx% of trial eligible patients were treated outside the trial, most of whom (xx%) were treated with BMM plus EVT.