Stroke incidence was thought to be higher in men than women except in the very elderly.1 In contrast, recent European data suggests stroke incidence may be higher in young women than men.2, 3 The goal of this study was to examine the rate of index strokes by sex in young adults over time in a large US sample.

A 10% random sample of Pharmetrics Legacy, a nationally representative US Claims Database,4 was analyzed. Patients were included if they were ≥15 years old and enrolled continuously for at least 6 months between 2001-2014. Stroke was defined as an inpatient admission with acute ischemic stroke as the primary diagnosis (using ICD-9 codes).5 Incidence rate ratio (IRR) men/women was calculated for each age group. 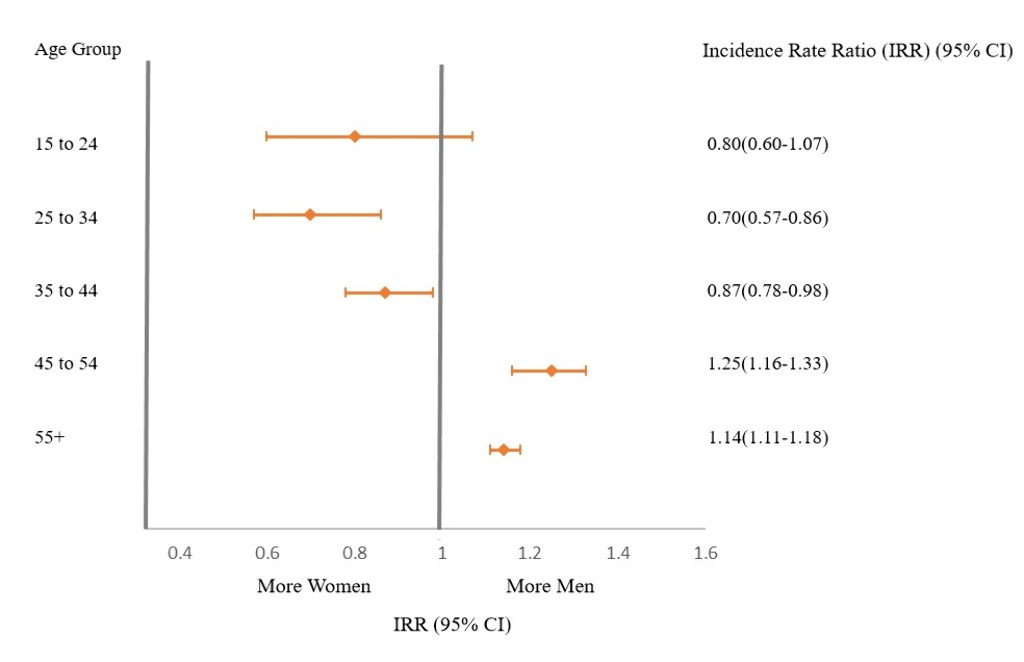 Despite the protective effect of estrogen on athersclerosis6, more young women than men have strokes, pointing to the potential importance of sex-mediated etiologies of stroke. Understanding these drivers is critical to treatment and prevention efforts.

The health and economic burden of stroke on Canadians are significant, but differences in resource use and cost related to sex are less understood. We aimed to compare the costs of stroke in women and men, from the perspective of the government payer (Ontario Ministry of Health).

In a retrospective population-based cohort study of adults admitted to hospital with ischemic or hemorrhagic stroke in Ontario between 2008 and 2017, we used linked administrative data to estimate costs in the year prior to and the year following the index admission. Healthcare costs attributable to stroke were calculated by subtracting the direct costs in the year pre-stroke from the costs in the year post-stroke. Costs were adjusted for inflation and expressed in 2018 Canadian dollars.

The mean cost attributable to stroke is higher in men than women, particularly in acute inpatient care, outpatient care, and rehabilitation institutions. However, women incur greater costs in long-term care than men.

Previous studies of stroke management and outcome after stroke in Sweden reveal differences between men and women. Our aim was to analyze if these differences have altered over time.

All stroke events registered in Riksstroke, the Swedish Stroke Register during 2005-2018 were included. We performed unadjusted and age-stratified analyzes.

In this large nation-wide observational study, we report a more equal care between women and men. Still, women were less often prescribed statins and were less often treated at stroke units. One explanation to these differences could be women’s higher age at stroke onset, with a presumed frailty, but further analyzes are needed to investigate if the disparity is motivated.

We aimed to assess sex differences in functional improvement for stroke patients during inpatient rehabilitation. 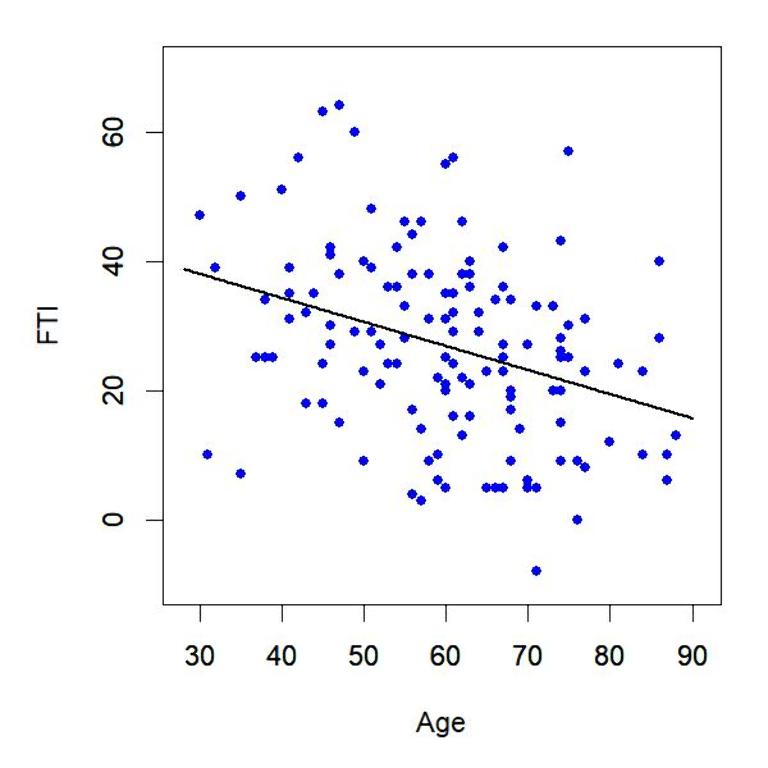 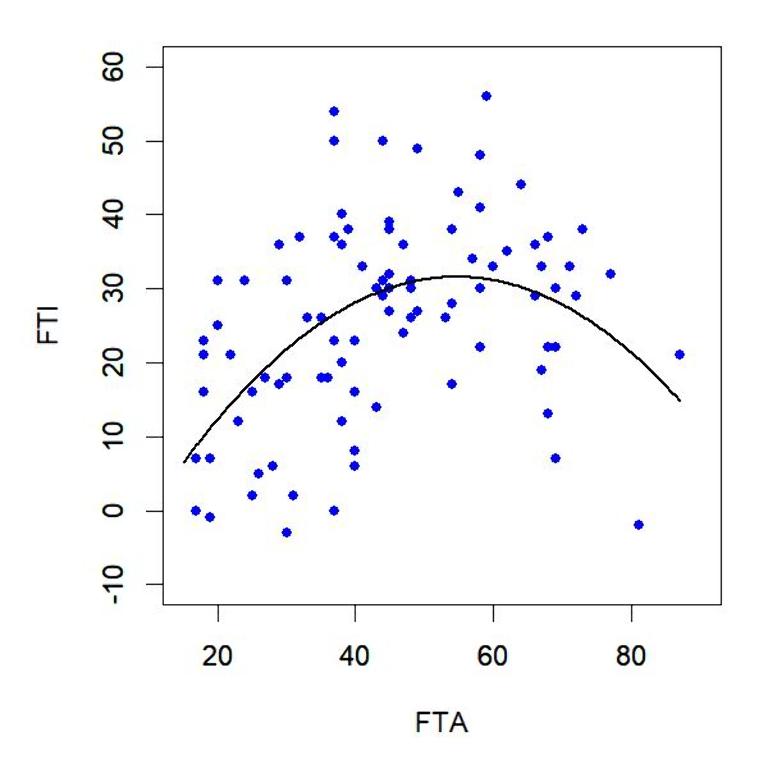 On behalf of the CANadian Women IN Neurovascular Medicine (CAN-WIN)

Women are commonly promoted at a slower rate and are underrepresented as invited speakers at scientific meetings and in academic leadership positions. Our aim was to assess gender equity and disparities in neurovascular medicine in Canada.

The CANadian Women In Neurovascular medicine (CAN-WIN) is a professional group of female and male physicians, health professionals and researchers, established in 2017 with the aim of promoting sex/gender equity in neurovascular medicine. To describe demographics and professional needs, we asked all Canadian Stroke Consortium members to participate in a survey related to professional profile, mentorship experience, conference invitations and leadership positions.

In our population, women more often had junior academic positions than their male counterparts. Women were less likely to be invited speakers at meetings and held fewer leadership positions. Career development strategies should be designed to promote greater representation and early career participation of women in academic neurovascular medicine.

VARIATIONS BY AGE, SEX AND DEPRIVATION CATEGORY IN THE PRESCRIBING OF SECONDARY PREVENTION MEDICATIONS AFTER STROKE IN SCOTLAND: A NATIONAL DATABASE STUDY.

Background: Optimal medication treatment after stroke is important in preventing recurrent stroke events. Age, sex and socioeconomic factors (deprivation categories) have been shown to impact treatment and outcomes in patients with cardiovascular disease across different populations.

Aims: To evaluate the effect of age, sex and zones of deprivation on prescribing patterns for secondary prevention after an index stroke in Scotland.

There is a sex gap in cerebrovascular medicine, and women tend to be underrepresented in both clinical trials and acute treatment. We aimed to explore sex differences in baseline characteristics in Norwegian intravenous thrombolysis treated patients included in the Norwegian Tenecteplase Trial (NOR-TEST).

NOR-TEST is an open label, randomized, blinded endpoint trial comparing treatment with tenecteplase to alteplase in patients with acute ischemic stroke, eligible for treatment with intravenous thrombolysis within 4.5 hours after symptom onset.

Women were underrepresented in the NOR-TEST trial. The included women more often had stroke mimic diagnosis, lower cardiovascular risk factor burden than men, but more severe symptoms. Reasons for lower representation of women in intravenous thrombolysis trials should be explored in future research.

The research population consists of patients from the LUMC primary care network in the Netherlands. Inclusion criteria were female sex, age 18-65, and no history of CVD or statin prescription. We created a landmark dataset with landmarks every year. Two models of stroke risk were developed. The first model included the traditional risk factors age, sex, smoking, hypertension, diabetes, and hyperlipidemia. The second model additionally included female specific risk factors (migraine, complications during pregnancy, hormonal contraceptive use, and hormonal replacement therapy). For both models we used multivariable Cox regression to obtain the concordance-index, and internally validated results using 5-fold cross-validation. We corrected the standard error for clustering in the landmarked dataset.