The HATICE trial investigated whether a coach-supported Internet intervention for self-management can reduce cardiovascular risk in community-dwelling older persons.

Cross-sectional study in consenting adults with LLT in the past 12 months and LDL-C measurement(s) in the past 14 months, seen in primary or secondary care across 18 European countries. Patients with coronary, peripheral and cerebral disease were enrolled at a ratio of 1:2:2 (FH patients with prior cardiovascular events excluded). Data were collected from medical records at a single visit between Jun ‘17–Nov ’18, including LLT and most recent LDL-C. Primary outcome was LDL-C goal attainment ≥ 28 days after starting most recent LLT (treatment-stabilised LLT). We report data from patients with cerebrovascular disease.

European patients with cerebrovascular disease are not treated as per EAS/ESC recommendations; a large proportion received suboptimal LLT and only 16% to 36% achieved target LDL-C levels.

ASSOCIATION OF SYSTOLIC BLOOD PRESSURE LEVEL AND ITS VISIT-TO-VISIT VARIABILITY WITH ISCHEMIC/BLEEDING EVENTS DURING LONG-TERM MEDICATION WITH PRASUGREL OR CLOPIDOGREL AFTER NON-CARDIOEMBOLIC STROKE: PRASTRO-I

High blood pressure (BP) increases the bleeding risk during antithrombotic medication. The association of BP levels during long-term secondary stroke prevention with thienopyridines, in particular prasugrel, with the risk of ischemic/bleeding events has been understudied.

This was a post-hoc analysis of the multicenter, randomized, double-blind PRASTRO-I trial (JapicCTI-111582). Patients with non-cardioembolic stroke were randomly assigned (1:1) to receive prasugrel 3.75 mg/day or clopidogrel 75 mg/day for 96-104 weeks. Risks of ischemic (ischemic stroke, myocardial infarction, and vascular death) and bleeding (life-threatening or major) events, as well as that of ischemic stroke and intracerebral hemorrhage, were determined according to the mean level and successive variation (SV) of systolic BP (SBP) throughout the observational period. The risks were also compared among quartiles of mean levels and SV of SBP.

A total of 3747 patients (62.1±8.5 years old, 797 women) were studied. All the risks of the ischemic events (142 events), bleeding events (47 events), ischemic stroke (133 events) and intracerebral hemorrhage (13 events) were positively correlated with increasing mean SBP overall (p=0.029, 0.004, 0.039, <0.001, respectively). There was no difference in any event rate between two treatment groups at each quartile. Similarly, all the risks of these events were positively correlated with increasing SV of SBP overall (p<0.001 for all) with no significant differences between treatment groups at each quartile.

Both the mean level and the visit-to-visit variability of SBP are predictive of ischemic and bleeding event risks during long-term medication with either prasugrel or clopidogrel after stroke.

As the formation of atherosclerosis initiates early in life, our aim was to assess the association of lifestyle and cardiovascular risk factors with the intima-media thickness, a surrogate for early vascular aging, in healthy adolescents.

1573 adolescents with a mean age of 16 years were enrolled, 1000 of which received a prospective follow-up after an average of 22.1 months. Cardiovascular risk and lifestyle factors were evaluated by standardized interviews, physical examination, and fasting blood analyses. Carotid intima-media thickness (cIMT) was measured at baseline and follow-up by high-resolution ultrasound. Aortic intima-media thickness (aIMT) was assessed during follow-up only.

Several vascular risk factors like elevated blood pressure (4.7% >95th percentile), overweight (9.2% >95th percentile) and smoking (29.7%) were already prevalent at this age. In multivariable linear regression analysis male sex, body weight, systolic blood pressure, LDL-cholesterol and physical activity were independent predictors of cIMT both at baseline and follow-up. In addition, alanine-aminotransferase, a laboratory surrogate of non-alcoholic fatty liver disease, was independently associated with cIMT at follow-up and pack-years of smoking with aIMT. Variability of cIMT in general was low in this age group and no plaque formations were observed. cIMT showed a slow progression of 3.5 µm/year (95% CI, 1.1-5.9).

Unfavorable lifestyle and cardiovascular risk factors were prevalent in adolescents and already showed an association with vessel wall thickness. Hence, interventional strategies in early life might be successful in preventing cardiovascular manifestations in later life.

Vascular risk factor control in stroke patients is important to prevent recurrent major cardiovascular and cerebrovascular events. In the rural population, this is hindered by the lack of physicians and nurses. We hypothesized, accredited social health activists (ASHA) a community health worker can help lower blood pressure (BP) in stroke patients at the end of 6 months.

In this cluster randomised trial two rural blocks with 70 and 94 villages respectively, stroke patients were assigned to either ASHA assisted risk factor control with standard treatment (ST) and ST alone. Assessors blinded to intervention conducted the baseline visit and 6 months follow up visits in both the rural blocks. In the intervention arm, ASHA conducted weekly visits for the first month and monthly visits for the remaining 5 months.

Task sharing by ASHAs can improve BP control in rural populations with stroke. Community health workers can also help in the adoption of healthy behavior.

A hundred and four patients (mean age 71.2 years-old; 53 women) with mild VCI were randomized for a six-month intervention (n=53) with moderate physical activity (60 minute sessions 3 times/week) or best practice usual care (n=51), stratified by sex. Neuropsychological, functional, mood and motor performance including accelerometry were evaluated at inclusion and month-6. Attendance of sessions (for the intervention group) was recorded.

For the primary outcome, no cognitive decline was observed in the intervention and best usual care groups after 6-months, as well as in quality of life and functional status. The intervention group improved significantly after 6 months in aerobic capacity (6 minutes walking test) and in agility (8-foot up and go). Attendance of the sessions was variable (18/45,40% attended less than half of the sessions). In the intervention group, MoCA score at 6 months improved in those who fulfilled WHO recommendations for physical activity (23.2 at baseline to 24.7 at month-6, p<0.01).

Cognitive improvement was observed among subjects in the intervention group fulfilling physical activity WHO recommendations, irrespectively of attendance rate of the sessions. The whole sample had no significant cognitive decline over 6 months. Intervention over 6 months had a beneficial impact in aerobic capacity and agility.

IMPACT OF ADHERENCE TO ANTIPLATELET MEDICATION ON LONG-TERM CARDIOVASCULAR OUTCOMES AND ALL-CAUSE MORTALITY AFTER ISCHEMIC STROKE: A NATIONWIDE COHORT STUDY

Numerous trials have proved antiplatelet therapy as a foundation of prevention of vascular death, myocardial infraction (MI) and stroke recurrence in patients with prior history of ischemic stroke. Nevertheless, non-adherence to antiplatelet medications is known to be pandemic and is associated with poor clinical outcomes. The aim of this study was to examine the effect of adherence to antiplatelet medications on the major cardiovascular outcomes and all-cause mortality for patients with newly diagnosed ischemic stroke in a real-world setting by using a large-scale representative national claims data of Korea.

We included 2210 Patients who were newly treated ischemic stroke with antiplatelet therapy during 2003 to 2010. Adherence to antiplatelet medications were measured using the Medication Possession Ratio (MPR) according to the pharmacy claims data. The main outcome of this study was a composite endpoint of recurrent ischemic stroke, myocardial infarction (MI) or all-cause mortality. Time-dependent Cox proportional hazard regression analyses were performed. 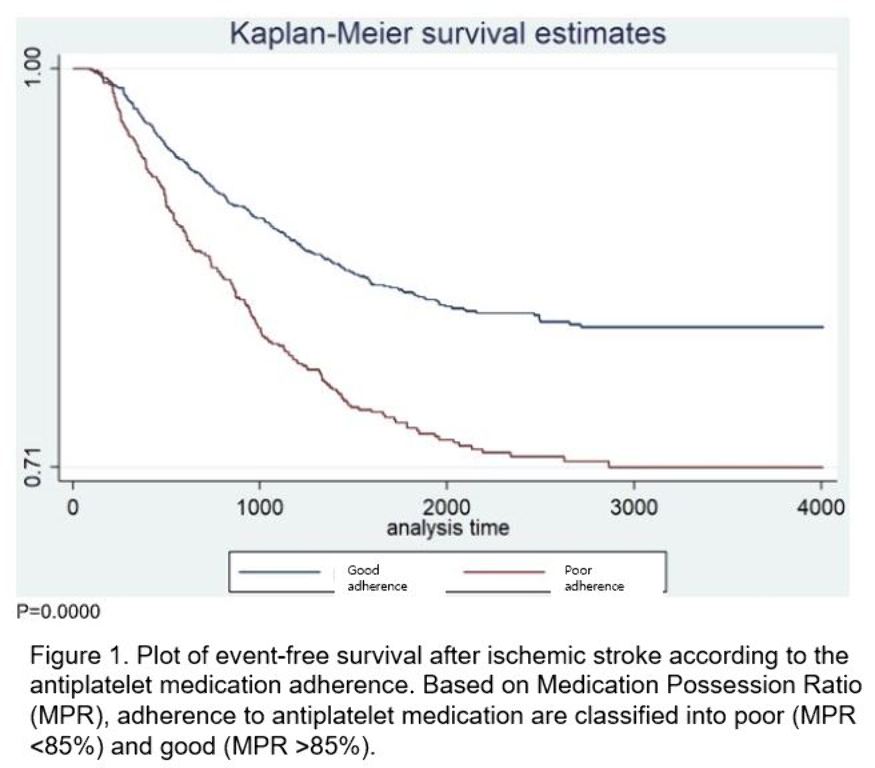 We prospectively included consecutive adults admitted between 2004 and 2009 within the first 24 hours of a spontaneous ICH, who survived at least 30 days. We evaluated clinical and radiological predictors of long-term mortality using univariate and multivariable Cox’ proportional hazard regression models.

Atrial fibrillation (AF) is considered the strongest risk factor for ischemic stroke but efficient treatment can lower this risk significantly. To detect and treat atrial fibrillation is therefore a very important task within stroke care to reach optimal secondary prevention. The aim of this study was to evaluate the implementation of Zenicor handheld ECG to increase detection of atrial fibrillation in stroke patients.

We retrospectively investigated patients who were diagnosed with ischemic stroke or TIA submitted from two stroke units in Sweden that were subject to evaluation with Zenicor handheld ECG. Patients who underwent standard care workup including 24h ECG without identifying any apparent cause of stroke were subject to investigation. Patients conducted four ECG recording daily for 14 days.

A considerable proportion of patients who were admitted for ischemic stroke suffered from paroxysmal atrial fibrillation that remained undetected with standard 24 h ECG investigation. Additional ECG recordings for 14 days increased the detection rate and improved secondary prevention with oral anticoagulation in this material.

The measurement of low-density lipoprotein cholesterol (LDL-c) is routinely used for ischemic stroke (IS) risk assessment and risk management. The use of intensive lipid-lowering therapy by means of statin medications is recommended after IS of atherosclerotic origin. We aim to assess baseline LDL level and usage rates of statins in patients after acute IS in China.

CNSR-III is a large-scale nationwide registry in China. Between August 2015 and March 2018, the CNSR-III recruited consecutive patients with ischemic stroke or TIA from 201 hospitals that cover 22 provinces and four municipalities in China. Clinical data were collected prospectively using an electronic data capture system by face-to-face interviews. Blood samples were collected and LDL level were tested at baseline. Patients were followed for clinical outcomes and medication information at 3 months, 6 months and 1–5 year annually. Intensive lipid lowering treatment (LLT) was defined as Atorvastatin ≥40mg or Rosuvastatin ≥20mg.

A large proportion of patients with IS needs to receive LLT in China. Usage rate of intensive LLT remains a challenge, especially after discharge.