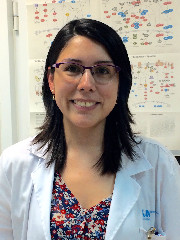 IRF9 is an integral transcription factor in mediating type-I interferon antiviral-response, as part of ISGF3. Our aim is to report a family where several members showed a striking susceptibility to viral-infection and IRF9-deficient.

Genetic analysis revealed a homozygous splicing mutation in IRF9 gene [c.577+1G>T (NM_006084)], which was confirmed in homozygosity in the proband and his sister, and in heterozygosity in both parents. Skipping of exon-5 generated a frameshift and a premature stop codon (p.Glu166LeufsTer80). No expression of IRF9 was observed in: unstimulated or IFNα-stimulated patient-PBMCs and 293T-cells transfected with c.577+1G>T IRF9-construct. After IFNα stimulation or RSV-infection of primary fibroblasts, initial steps of signalling cascade were conserved in IRF9-/-, but no induction of ISGs (MX,IFIT3,ISG15) was observed. In cell lines where IRF9 expression was targeted by CRISPR/Cas9-technology, an impaired induction of ISGs after IFNα treatment was noted and decreased cellular control of viral-replication. In contrast, transfection of patient-cells with wt, but not mutant, IRF9 enhanced their ability to control the replication of various viruses.

The marked susceptibility to virus-infections associated with IRF9-deficiency emphasises that children presenting with unexpectedly severe consequences after either viral infection or vaccination (live-attenuated) should be evaluated bearing in mind the possibility of immune defects affecting IFN-system.

MAGT1 is a critical regulator of intracellular free Mg2+ in the immune system. Its loss-of-function mutations abolish the transient TCR-induced Mg2+ flux that is essential for optimal T-cell activation. Our aim is to report a case with XMEN disease.

The index patient is a 12yo boy, born at term from healthy, non-consanguineous parents, with family history of Burkitt Lymphoma in a maternal uncle. Since 5yo, he suffered recurrent cervical and abdominal lymphadenopathy. His EBV serologies showed past infection and EBV-PCR was persistently elevated. Immunological study showed dysgammaglobulinemia, normal CD4/CD8 ratio, increased TCRαβ CD4-/CD8- and low memory B cells. We analyzed NKG2D expression, intracellular signaling (Akt and S6 phosphorylation and Ikba degradation), in vitro activation assay with PMA and with specific stimuli (anti-CD3/CD28) and in vitro VEB-specific response.

Genetic analysis (NGS customized panel) revealed a novel hemizygous mutation in MAGT1 gene. The mutation, c.97_98delinsC (NM_032121), was confirmed in heterozygosity in his mother. His uncle was unaffected. NKG2D surface expression in NK and CD8+ cells was absent. Basal intracellular signaling (Akt and S6 phosphorylation) was similar than HD. Ikba degradation in B cells is normal, but there is a slight defect in CD3+ (pending on confirmation). Activation markers (CD69, CD25 and CD86) were decreased after anti-CD3/CD28 stimuli. Decreased NK degranulation upon incubation with K562 cells was observed, but it was normal after PMA/Ionomycin stimulation. VEB-specific response in vitro was impaired.

XMEN disease should be ruled out in male with impaired clearance of EBV-infection and EBV-driven lymphoproliferative complications.