Inborn errors in immunity (IEI) often display variable expressivity and reduced penetrance and have rarely been systematically evaluated in large cohorts. To better understand genetic contributions to IEI, we are collecting standardized data from a large cohort of NIAID research participants.

One thousand nine hundred participants are enrolled to undergo exome sequencing with interpretation based on American College of Medicine Genetics (ACMG) guidelines. The phenotypes of these individuals are being recorded using the Human Phenotype Ontology (HPO), a standardized, computable, controlled-vocabulary.

Among finalized reports, 18% (27/149) of the reported pathogenic and likely pathogenic variants associated with IEI are not yet present in the literature or reported in ClinVar. Null variants in a gene where loss of function is a known mechanism and being located in a mutational hot spot are types of evidence that significantly contributed to this subset of previously unreported variants. Regarding phenotypic data, three hundred eleven new terms specific to immunology were added to the HPO. Subsequently, the clinical features of 1576 participants were coded using 5000 HPO terms. Initial exploratory analyses show rare combinations of clinical phenotypes as well as disease endotypes ripe for further analysis.

Our findings highlight previously unreported diagnostic variants within the cohort and initial explorations of phenotypic data. These approaches help prioritize areas for in-depth investigation in order to ultimately improve evaluations and genetic counseling for patients with IEI and their families.

This research was supported by the Intramural Research Program of the NIH, NIAID.

Ten to twenty percent of CVID patients develop symptomatic interstitial lung disease. Granulomatous-lymphocytic interstitial lung disease (GLILD) is a distinct clinic-radio-pathological interstitial lung disease associated with lymphocytic infiltrate and/or granuloma in the lung. GLILD is associated with other granulomas, hepatosplenomegaly, lymphadenopathy, immune cytopenias, low IgA, high IgM, increased CD21Low B-cells and decreased switched memory B-cells. Suspicion of GLILD will often be raised on radiologic findings and as lung biopsy carries a high risk of complications we explored whether a set of combined diagnostic criteria could be helpful in identifying patients with a probable or possible diagnosis.

We defined a set of major and minor criteria that should be present for the diagnosis of definitive (all five major), probable (three/four major, four minor) and possible (two major, four minor) GLILD. We then identified 31 CVID-patients with radiological findings suspicious of GLILD and characterized them according to these criteria. 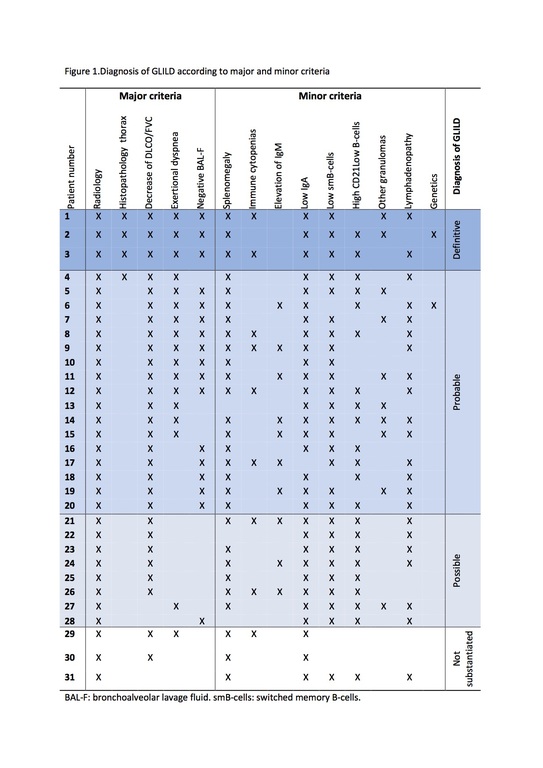 The use of combined diagnostic criteria can be helpful in identifying patients with a likely diagnosis of GLILD also in the absence of histopathological findings.