The genetic, molecular, and cellular analysis of autoinflammatory and immunodeficiency disorders contributes to our understanding of human immunity and leads to the development of targeted therapies. Oligoadenylate synthase 1 (OAS1) is an intracellular double-stranded RNA sensor that generates the second messenger 2'-5'-oligoadenylate to activate RNaseL as a means of antiviral defense. We analyzed four unrelated patients with a polymorphic syndrome of fever, dermatitis, pulmonary alveolar proteinosis, inflammatory bowel disease, and hypogammaglobulinemia.

Heterozygous OAS1 gain-of-function variants cause a polymorphic autoinflammatory and immunodeficiency syndrome that can be cured by allogeneic hematopoietic stem cell transplantation. OAS1 emerges as a critical regulator of monocyte and B cell human biology.

EXPANDING THE SPECTRUM OF HYPER IGE SYNDROMES: DESCRIPTION OF A KINDRED WITH A NOVEL VARIANT IN IL6ST

Historically, hyper IgE syndromes (HIES) are characterized by a clinical triad of relapsing skin abscesses, recurrent pneumonias complicated by pneumatocoele and elevated serum levels of IgE. HIES is a multi-system disease; aside of the abovementioned triad, recurrent viral infections, eosinophilia, eczema and connective tissue abnormalities (such as retained teeth and craniosynostosis) further complicate the phenotype. With the advent of next generation sequencing, the genetic landscape of HIES is ever-expanding, providing unique opportunities to understand this complex immunodeficiency syndrome.

Here we present a Bulgarian 8-year-old girl suffering from atopic eczema, severe asthma and recurrent respiratory infections. Her father has a similar phenotype characterized by relapsing staphylococcal skin infections and severe airway infections complicated by pneumatocele and mucormycosis. Both daughter and father present with frontal bossing and supernumerary teeth, due to absent shedding. In both cases, immunological investigations reveal eosinophilia and increased levels of IgE. The father’s phenotype is additionally complicated by hypogammaglobulinemia.

Genetic analysis revealed a heterozygous frameshift mutation in the gene IL6ST resulting in a premature stop (I719NfsTer2). IL6ST encodes GP130, a transmembrane protein that acts as a signal transducer for many cytokines, including IL-6 and IL-27. In two recent reports, homozygous IL6ST missense variants were identified in patients suffering from HIES with defective STAT3 signaling. Indeed, STAT3 phosphorylation is impaired in I719NfsTer2 PBMCs upon stimulation, providing first prove of the pathogenic nature of this variant.

In summary, the discovery of this novel variant highlights the role of IL6ST in human immunity and expands the spectrum of hyper IgE-like syndromes. 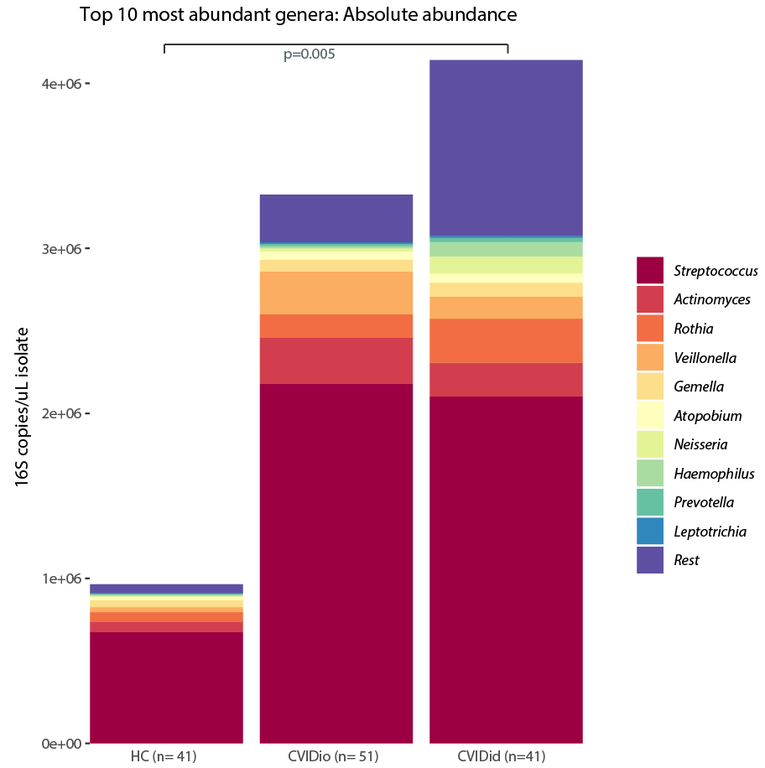 Whole-exome sequencing of these patients revealed a heterozygous variant (p.G307D) in the target of myb1 membrane trafficking protein (TOM1) -gene. TOM1 is known to be involved in autophagy, endosomal trafficking, and receptor recycling, all of which have been implicated in monogenic autoimmune diseases.

Our objective was to elucidate the mechanisms by which this mutation causes the phenotype seen in these patients.

Fluorescence microscopy and western blotting were utilized to study autophagy and innate immune signaling in primary skin fibroblasts and lymphoblasts from the patients carrying TOM1 mutation.

TOM1 mutation carried by the patients causes defective autophagosome clearance and is likely to contribute to the clinical phenotype of these patients.

IMMUNE-DYSREGULATION AND APOPTOSIS DEFECT IN PATIENTS WITH GAUCHER DISEASE

Gaucher Disease(GD) is a congenital disorder secondary to GBA1-gene mutations causing the impairment of the β-glucocerebrosidase(GBA) enzyme with progressive accumulation of its substrate(glucocerebroside, GC) in monocyte/macrophage system and various organs. Bone infiltration, hepatosplenomegaly and cytopenia represent the most common clinical features which might overlap with Autoimmune Lymphoproliferative Sindrome(ALPS) ones.GD patients also show hyperinflammatory features -secondary to machrophages activation- and an aspecific impaiment involving B,T,and NK-cells. The aim of this study is to evaluate ALPS-like immunological and serological pattern in a cohort patients with GD and to test apoptosis function in those showing ALPS-like features.

41 patients(8 naive,33 treated)were studied. 10/41(24%) patients showed an ALPS-like immunological pattern which was more frequent in naïve patients(p=0.003) and in patients with an earlier onset of the diesease(p=0.010). EBV-immortalized B-cells of 7/10 patients were further studied and all of them showed a defective apoptosis and caspases activation(Fig1).

This study shows for the first time that untreated subjects with early-onset GD present an immune-dysregulation pattern secondary to an apoptosis defect as seen in ALPS patients. These results suggest that diagnostic work-up of both diseases must consider this clinical/biochemical overlap. Further studies are needed to evaluate the potential role of cell-membrane lipids impairment on FAS receptor structure as a cause of such defect.

Patients with gain-of-function (GOF) STAT1 mutations display a variety of infectious and non-infectious manifestations. Some of them present severe infections and/or autoimmunity, resulting in poor prognosis. Therefore, it is imperative to establish effective treatments based on a precise understanding of the molecular mechanisms of this disorder. To tackle this problem and establish a disease mouse model, we generated GOF-Stat1 knock-in (GOF-Stat1R274Q) mice. Since a decrease in Th17 cells has been already correlated with the development of chronic mucocutaneous candidiasis in patients, we focused on the small intestine, which contains abundant Th17 cells in mice.

We generated GOF-Stat1R274Q mice by introducing the human R274Q mutation. Small intestinal lymphocytes from these mice were analyzed at 3 weeks after Candida albicans infection by flow cytometry, qPCR and RNA-seq.

The GOF-Stat1R274Q mice generated in the current study turned out to be a reasonable model of patients with GOF STAT1 mutations and is expected to be a useful tool not only to pursue the molecular mechanism, but also to develop therapeutic strategies, of this disorder.

We retrospectively reviewed 21 lymphoid neoplasms occurring in the context of CVID and CVID-like disorders.

Median age at diagnosis of lymphoma was 38 years. Median time between onset of first symptoms attributed to CVID and lymphoma was 14 years. Non-infectious inflammatory and autoimmune manifestations had a higher prevalence in CVID patients with lymphoid malignancies compared to the CVID population in general. Next-generation sequencing revealed three CTLA4 mutation carriers, one TNFRSF13B variant, one BACH2 mutation, one STAT1 mutation and one NFKB2 variant of unknown significance. The most prevalent B-cell lymphoma subtypes were marginal zone lymphoma (MZL) and diffuse-large B-cell lymphoma (DLBCL). The majority of Hodgkin lymphomas occurred in germline CTLA4 mutation carriers and was EBV+ mixed cellularity classical subtype. T-cell lymphomas were less frequent and mostly T-cell large granular lymphocytic leukemia (T-LGLL). EBV association of DLBCL was more frequent compared to the general population and was accompanied by expression of PDL1 and PD1 suggesting a tolerogenic tumor environment. The prognosis of the CVID patients was predominantly determined by the underlying lymphoid neoplasm while toxicity of treatment had a minor impact.

Our data illustrate that an inflammatory environment facilitates the development of a distinct spectrum of lymphoid neoplasms in CVID. Hodgkin lymphoma occurring in the context of antibody deficiency should raise the suspicion of a CTLA4 mutation carrier status. Future studies will have to dissect the complex interplay between host and environmental factors facilitating the development of lymphoid neoplasms in CVID and CVID-like disorders.

PFAPA syndrome (the syndrome of Periodic Fever, Aphthous stomatitis, Pharyngitis and cervical Adenitis) is an idiopathic autoinflammatory condition. The current pharmacological treatment includes episodic application of corticosteroids and many other options for the prophylaxis of flares (e.g. anakinra, ketofifen, oral probiotics). We present our group of patients and the efficacy of different prophylactic options.

We present our group of patients with PFAPA syndrome, which were diagnosed according to valid clinical criteria in our Centre for Periodic Fever Syndromes in Martin, Slovakia.

144 patients with this diagnosis were identified, 74 boys and 70 girls, aged 4.01±2.78 years. The mean age of symptoms’ onset was 2.26±1.92 years. Positive family history was found in 21.36% of patients. During attacks 100% of patients had fever; pharyngitis and cervical adenitis was present in 96% of patients, 50% of patients had aphthous stomatitis. All of our patients yielded elevation of inflammatory parameters (CRP, serum amyloid A, IL-6) during attacks. All of the patients were treated episodically with prednisone with excellent clinical response. For the prohylaxis of febrile episode we used ketotifen with positive effect observed in 63% of patients. Specific oral probiotic strain (Streptococcus salivarius K12) was used in 22 patients with recurrent aphthous stomatitis with good outcome in 5 of 22 patients. Tonsillectomy was indicated in 14% of patients with excellent clinical response.

In our cohort of PFAPA patients we showed unique characteristics of this patients and confirmed the positive effect of new treatment possibilities, e.g. ketotifen or oral probiotic strain.