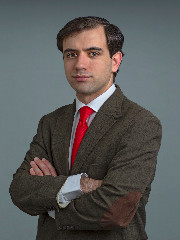 NYU Grossman School of Medicine Child and Adolescent Psychiatry
Dr. Pereira-Sanchez, psychiatrist, is a Fundacion Alicia Koplowitz Fellow in Child and Adolescent Psychiatry at NYU Grossman School of Medicine in New York and a PhD candidate at Universidad de Navarra in Pamplona, Spain. His interests range from neuroimaging to medical education to global mental health. He has invested in the development of international networks of early-career psychiatrists: he founded the World Network of Psychiatric Trainees, and is now coordinating the ‘Global Mental Health Research Think Tank’ of early-career mental health clinicians and researchers. These initiatives have given him experience in online-based international research in psychiatry, which he is passionate to share.

Date
Mon, 12.04.2021
Session Time
17:30 - 19:30
Room
Courses Hall A
Chair(s)
Session Description
Proposed by the EPA Section on Tele Mental Health - Psychiatry is being highly benefited from the possibilities enabled by globalization and the digital world to conduct valuable international research. Researchers can set up diverse teams coordinated in real-time and easily design different studies and interventions to be applied globally. Moreover, the current COVID-19 pandemic has highlighted the value and need for such collaborations. This course aims at providing the audience with practical methods, tools, and skills for conducting internet-based international research, harnessing the growing expertise of a group of young European psychiatrists. The faculty will be available to assist each of the attendees before, during and after the course, and will be providing additional handouts, references, templates, written guidelines, and video tutorials. This activity is meant to be eminently practical and interactive, combining presentations with discussions of examples of work from the faculty and supervised individual and group exercises. The contents will include the introduction of skills, tips, and free tools for designing research proposals, team coordination, international surveys, systematic reviews, reference managing, analysis of social media contents, manuscript writing and publishing, and science dissemination, among other topics. The course would welcome any mental health practitioner/researcher. It will not necessarily require experience in the methods and tools to be presented and will be further tailored to the actual audience. It may be of particular use for early-career psychiatrists and trainees. This course aligns with the conference general theme and is a joint proposal of the EPA Scientific Section of TeleMental Health and the Early Career Psychiatrists Committee.
Session Icon

LIVE - ECP Symposium: Are You Online?

Date
Sun, 11.04.2021
Session Time
17:30 - 19:00
Room
Channel 2
Chair(s)
Session Description
In this session we will hear about cutting-edge digital and psychosocial interventions and the evidence about them, using the internet, data science and social media, and their positive and negative impact.
Session Icon

ECP0033 - Neuroimaging in ADHD: How Far Are Scanners From Clinical Psychiatry?

Decades of neuroimaging research in attention/deficit-hyperactivity disorder (ADHD) have yielded a few apparently firm findings and many open questions. The long-term objective of these efforts is to uncover the underlying brain pathophysiology of the disorder, to reveal reliable biomarkers of prognosis and treatment response, striving for personalized medicine. Unfortunately, neuroimaging research in ADHD and other psychiatric disorders is still unable to inform clinical practice.

This presentation will provide an up-to-date overview of neuroimaging in ADHD, highlighting the most promising results and current challenges of structural and functional research with magnetic resonance imaging (MRI). Evidence from large, multicentric studies and from highly-sophisticated resting-state functional MRI techniques will be presented; methodological and reproducibility limitations in current literature will be introduced, and the way forward to bring this area of research closer to clinical practice with patients with ADHD will be discused.

Hikikomori is a form of severe social withdrawal, initially described in Japan and recently reported in other countries around the world. Individuals with hikikomori shut themselves in their homes with minimal interaction with society and little participation in school or the workforce.

The nature of hikikomori makes the individuals suffering it a hard-to-reach population. While hikikomori was described in Japan much before the ‘digital revolution’ of the 2000s, the internet, social media, and online gaming have radically changed the way people interact. This may be particularly true among hikikomori who spend much time online for entertainment or social interaction. Given this, the online world has been proposed as an accessible gateway to reach and support individuals with hikikomori.

This talk will present and discuss the results of the Twitter-hikikomori international studies, conducted between 2018-2020 and led by Dr. Pereira-Sanchez, which employed social media mixed quantitative-method analyses to characterize the public conversations related to hikikomori on the social media platform Twitter in several Western languages and Japanese.

As for the results, Twitter data provided evidence that hikikomori extends well beyond Japan examining, and showed that tweets in Japanese are more often are related to personal anecdotes, whereas tweets in Western languages are more often related to hikikomori as a medical issue. Apart from the results of the content analyses studies have been a proof of concept on the use of social media contents to investigate a phenomenon affecting a hard-to-reach population, which may inspire future online-based efforts to better support these populations.