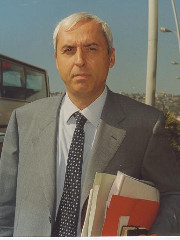 University of Campania L. Vanvitelli, Naples Department of Psychiatry
• Born in Naples, Italy on June 20, 1953. • MD (Naples, 1977); Specialist in Psychiatry (Naples, 1981); PhD in Behavioural Sciences (Umeå, Sweden, 1986). • Professor of Psychiatry and Chairman, Department of Psychiatry, University of Naples (1992-present). Professor of Mental Hygiene, University of Naples (1985-1992). • President, World Psychiatric Association (2008-2011). WPA Secretary for Publications (1999-2005). • President, European Psychiatric Association (2003-2004). Chairman, AEP/UEMS/ WHO/WPA Task Force (2003-2004). Coordinator, European Community Project on Burden on the Families of Patients with Schizophrenia (1994-1997). Coordinator, European Community Project on the Implementation of Psychoeducational Interventions for Families of Patients with Schizophrenia (2000-2004). • Founder and Editor of World Psychiatry, official journal of the WPA (impact factor: 40.595, ranking no. 1 among psychiatric journals and among all journals included in the Social Sciences Citation Index). Honorary Fellow, Royal College of Psychiatrists, UK (2012). Honorary Fellow, American College of Psychiatrists (2013). Doctor Honoris Causa, University of Craiova (2010). • President, Italian Psychiatric Association (2000-2002). President, Council of Italian Professors of Psychiatry (1997-2000). President, Italian Society of Biological Psychiatry (1991-present). President, Italian Society of Psychopathology (2007-2013). Founder, Italian Society of Psychiatric Epidemiology (1983). Founder, Italian Society of Psychiatric Rehabilitation (1987). Counsellor, Italian Society of Neuroscience (1995-1999). • Member of the Italian High Council of Medicine (2006-2013). Member of the Italian Academy of Medicine (1997-present). Advisor for Mental Health to the Minister of Health (1998-present). • Active as a researcher and an educator on behalf of the World Health Organization in sub-Saharan Africa, South East Asia and Latin America (1983-1991). Chairman, Section on Neuropsychiatry, Global Programme on AIDS, WHO Headquarters, Geneva (1989-1991). Director, WHO Collaborating Center for Research and Training in Mental Health, Naples, Italy (1992-present). • Member of the Advisory Board for the Chapter on Mental and Behavioural Disorders of the ICD-11. Chairperson of the Work Group on Mood and Anxiety Disorders for the Chapter on Mental and Behavioural Disorders of the ICD-11. • Member of the Work Group for Mood Disorders of the DSM-5. Advisor for Schizophrenia and Other Psychotic Disorders to the Task Force for the DSM-IV and the DSM-IV-TR. • Author of more than 700 papers in scientific journals and many monographs. His H-index (Google Scholar) is 91.

Conference Calendar
LIVE - State of the Art: The Clinical Characterisation of the Patient with Primary Psychosis Aimed at Personalisation of Management (ID 600) No Topic Needed

Session Name
LIVE - State of the Art: The Clinical Characterisation of the Patient with Primary Psychosis Aimed at Personalisation of Management (ID 600)
Session Icon

Session Name
LIVE - State of the Art: The Clinical Characterisation of the Patient with Primary Psychosis Aimed at Personalisation of Management (ID 600)
Session Icon

The view that the management of the patient with primary psychosis should be personalized is currently endorsed by the vast majority of clinicians, but this personalization is lacking or inadequate in most clinical contexts. We describe systematically the salient domains that should be considered in the characterization of the individual patient with primary psychosis aimed at personalization of management. These include positive and negative symptom dimensions, other psychopathological components, onset and course, neurocognition and social cognition, neurodevelopmental indicators; social functioning, quality of life and unmet needs; clinical staging, antecedent and concomitant psychiatric conditions, physical comorbidities, family history, history of obstetric complications, early and recent environmental exposures, protective factors and resilience, and internalized stigma. For each domain, simple assessment instruments are identified that could be considered for use in clinical practice and included in standardized decision tools. A management of primary psychosis is encouraged which takes into account all the available treatment modalities whose efficacy is supported by research evidence, selects and modulates them in the individual patient on the basis of the clinical characterization, addresses the patient’s needs in terms of employment, housing, self-care, social relationships and education, and offers a focus on identity, meaning and resilience.