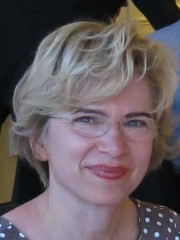 University of Manchester & Wythenshawe Hospital Greater Manchester Mental Health Foundation Trust
Dr Wieck is a Consultant Perinatal Psychiatrist and an Honorary Senior Lecturer at the University of Manchester in the UK. Her specialist interests are in perinatal mental health and reproductive psychopharmacology in which she lectures and publishes widely. She was the Clinical Lead for the Perinatal Mental Health Clinical Network in Greater Manchester, a member of the National Clinical Reference Group for Perinatal Mental Health and Expert on the Valproate Bipolar Advisory Group at the European Medicines Agency and is currently the Chair of the Womens Mental Health and Gender Section of the European Psychiatric Association.

Workshop: The Impact of the COVID-19 Pandemic on Women’s Mental Health and Service Delivery: What Have we Learnt?

Date
Mon, 12.04.2021
Session Time
10:00 - 11:30
Room
Channel 5
Chair(s)
Session Description
The Live Q&A of this session will take place in the Live Sessions auditorium. Please refer to the interactive programme for the exact time and channel. Proposed by the EPA section on Women, Gender and Mental Health - Gender can significantly impact on the course of infection during a pandemic, but also it’s longterm sequelae. In the case of COVID-19, current worldwide statistics show more men than women dying of acute infection, while women are projected to suffer more than men from the health, economic and social consequences of the pandemic. Up to date research findings will be presented by the first speaker. Several studies to date have reported an increase in common mental health problems during the acute phase of the Covid-19 pandemic in all population groups with a more pronounced rise in women. Longer-term effects on mental health in people who have suffered from Covid-19 are as yet unknown. The second speaker will focus on the incidence of post-traumatic stress disorder in this group, reviewing up-to-date literature and presenting data from her research group on men and women who were treated as inpatients or at home. The third speaker will discuss evidence that domestic violence and related deaths of women increased during the Covid-19 lockdown periods. The barriers that social restrictions create towards identifying and supporting victims will be discussed and recommendations given to overcome them. Particularly difficult challenges are also encountered during a pandemic by mental health services which care for women with severe mental illness who are pregnant or have recently given birth. The 4th and 5th speaker will discuss which strategies that were rapidly adopted during the Covid-19 pandemic to meet these challenges in the inpatient, community and liaison setting, were successful.
Session Icon

Date
Sun, 11.04.2021
Session Time
08:00 - 09:30
Room
Channel 3
Chair(s)
Session Description
Proposed by the EPA section on Women, Gender and Mental Health -The first speaker will outline key areas where progress in women’s mental health has been made in recent years. They include an increasing recognition of the important role that maternal mental health in the perinatal period has for the developmental trajectory of children and family function, and an increasing awareness of the links between women’s physical and mental health and social determinants, including violence in the home and community. Effective mental health and other services that target affected women and their families are increasingly supported by policy makers. Intimate partner violence is widespread globally and the main burden is borne by women with a range of poor outcomes. The second speaker will present data of a recent population study that examines the strength of it’s association with mental disorders in in male perpetrators and will discuss implications for risk reduction. It is now well established that there are significant differences in the suicidality of men and women. The third speaker will examine what we have learnt so far about factors that may explain the higher risk of suicide attempts and lower risk of suicide in women and the implication for prevention strategies. Human trafficking affects an estimated 20 million people worldwide. The last speaker will present data on the prevalence of mental disorders in female victims. At least some women will come into contact with mental health services who have a key role in responding to their needs. The presenter will discuss appropriate assessment, interventions and training.
Session Icon

Date
Tue, 13.04.2021
Session Time
10:00 - 11:30
Room
Channel 4
Chair(s)
Session Description
The Live Q&A of this session will take place in the Live Sessions auditorium. Please refer to the interactive programme for the exact time and channel. Proposed by the EPA Section on Women, Gender and Mental Health -The risk of new onsets and recurrences of affective psychosis and bipolar disorder is increased in the peripartum period, and in the first weeks after childbirth it is the highest than at any other time in a woman’s life. The first speaker will present recent findings from his and other research groups on the biological and psychosocial causation of this phenomenon. The second speaker will present recent data from a population study examining the strength of the association of parental mental illness and risk of injury to the offspring. Findings will be reported not only for maternal but also paternal mental illness, for common and severe mental disorders and for children in the first year of life versus older age groups. Increasing evidence shows that pregnancy has differential effects on the pharmacokinetics of psychotropic drugs. Large drops of plasma levels have been reported for some agents, potentially placing some pregnant women with severe mental illness at a greater risk of recurrence. The third speaker will discuss current pharmacokinetic and clinical research and make recommendations for therapeutic drug monitoring in the preconception, pregnancy and early postnatal period. Although suicide attempts in the perinatal period can lead to significant complications for pregnancy and child outcomes, they have received little attention in research. The fourth speaker will present recent findings on the prevalence of suicide attempts in pregnancy and the postnatal period and the profiles of risk factors from a large sample of women treated in mother and baby inpatient units.
Session Icon

Session Name
LIVE - ECP Symposium: Perinatal Psychiatry: Is it All About the Mother? (ID 839)
Session Icon

Session Name
Workshop: The Impact of the COVID-19 Pandemic on Women’s Mental Health and Service Delivery: What Have we Learnt? (ID 200)
Session Icon

Session Name
LIVE - ECP Symposium: Perinatal Psychiatry: Is it All About the Mother? (ID 839)
Session Icon

The risk of mothers to develop a severe mental illness is dramatically increased in the first three months after giving birth. Childbirth has the strongest relationship with postpartum affective psychosis, a condition that is characterized by an acute onset of florid symptoms, usually within 2 weeks of delivery, and atypical features, such as rapidly fluctuating psychotic symptoms, florid motor symptoms, perplexity and high risks to the mother and her baby.

Follow up data of women with a first episode suggest that some women only become ill in the context of childbirth whereas in others it is an expression of a lifelong bipolar disorder. Whether this reflects two distinct forms of the disorder or different degrees of vulnerability requires future study.

The profound hormonal and metabolic as well as psychosocial changes in the perinatal period give rise to a number of hypotheses that seek to explain the pathogenesis of postpartum psychosis. Current research findings on biological and psychosocial risk factors will be discussed as well as what is currently known about responses to treatment.

S0163 - Should We Monitor Psychotropic Drug Levels in Pregnancy and the Postpartum?

Pregnancy is associated with profound changes in pharmacokinetic processes. This is an important - and until recently neglected - area of research since the majority of women take drugs during pregnancy in addition to vitamin and dietary supplements. Recent evidence has emerged that the changes do not only include absorption, distribution and excretion but also drug metabolism, such as modifications in the regulation of hepatic metabolism and conjugation.

Oestradiol is known to have an important role in the expression of cytochrome P450 isoenzymes and glucuronosyltransferase that are involved in the metabolism of psychotropic drugs. Recent studies of different psychotropic drug classes have shown that this can result in profound changes of plasma concentrations that commence early in pregnancy and gradually increase towards delivery.

In this presentation pregnancy-induced metabolic changes that have been found so far for several psychotropic drugs will be discussed and the question addressed whether and how we should monitor plasma levels in our pregnant patients.

Mental disorders linked with the menstrual cycle, childbirth and the menopause are unique to women and have their specific requirements for identification, assessment, treatment and service provision as well as appropriately trained staff. Mental disorders that are linked to domestic violence, sexual abuse or victimisation and affect more women than men, also have their own specific requirements.

This is increasingly being recognized by policy makers and health care planners. In the case of perinatal mental health some countries have set up specialised inpatient and community services. In the UK this was followed by the development of National competencies for different professional groups and National training programmes. This project and the current clinical training in perinatal mental health for psychiatric trainees will be described. Nationally recognized qualifications are currently being developed.

Developments in other areas of women’s mental health appear less advanced. The presentation will discuss current guidelines and opportunities for training that are being offered in the UK and what we can learn from perinatal mental health for further development in these areas.