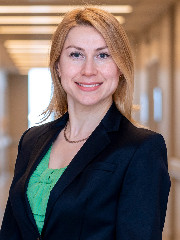 Bezmialem Vakif University Medical Faculty Department of Psychiatry
Ozge Kilic, Bezmialem Vakif Unversity Medical Faculty, Istanbul, Turkey Ozge Kilic obtained both her medical degree and her specialization in psychiatry at Istanbul University, Cerrahpasa School of Medicine, Turkey. In 2012, she participated in a clinical attachment at Liaison Psychiatry and Acute Addictions Units of Maudsley Hospital and King‘s College London. She served as the coordinator of the "Trainee Committee of the Psychiatric Association of Turkey", and as the trainee representative in the "Competency Board of Psychiatric Association of Turkey" (Development of Training Programs). She was both a delegate of Turkey and a member of the Research Working Group of "European Federation of Psychiatric Trainees" where she served as the national coordinator of several research projects relevant to psychiatric trainees. She was selected as a scholar in several educational activities for early career psychiatrists in Europe (The first "European Psychiatric Association (EPA) Academia Summer School on Comorbidity between mental and physical disorders”; "World Psychiatric Association (WPA) Leadership and Professional Skills Course for Early Career Psychiatrists"; as a "EPA Early Career Psychiatrist Scholar"; "WPA Early Career Psychiatrist Fellow"). In 2019, she has been appointed as Co-Chair of the "Early Career Psychiatrists Committee of EPA". She is a member of the Editorial Board of "Psychiatry and Behavioral Sciences". Her current research interests include adult attention deficit and hyperactivity disorder, mental health of young adults, consultation liaison psychiatry, gender differences in psychiatric disorders and psychiatric training.

Date
Mon, 12.04.2021
Session Time
19:30 - 21:00
Room
Channel 6
Chair(s)
Session Description
The Live Q&A of this session will take place in the Live Sessions auditorium. Please refer to the interactive programme for the exact time and channel. Youth, as being defined between 12-25 years, is the period of life when most mental ill-health has its onset. Some principles are defined to guide local implementation of youth mental health care in any resource setting or country: 1-awareness, engagement and integration, 2-easy and affordable access 3-youth-specific care, 4-youth partnership, 5-prevention, 6-early intervention, 7-family engagement and support, and 8-continuous improvement. However, care needs are far from being met. The presenters will talk about their experience and studies that attempted to address these principles in different contexts, populations and in different countries of Europe. Ekin Sonmez will discuss how social norms approach could be applied to prevent alcohol and substance use disorders in youth. Diego Quattrone will present an international study aiming to answer questions on cannabis and risk of first-episode psychosis. Aleksandar Savic will propose a model and report on the attempt of utilizing existing clinical programs (first episode psychosis and non-psychosis youth services) in providing adequate care for at-risk youth. Gaia Sampogna will discuss the consequences of being exposed to traumatic events (such as cyberbullying or the recent pandemic) on the mental health of young people. Victor Pereira-Sanchez will present his studies applying social media content analysis on Twitter to explore public perceptions regarding pathological social withdrawal (hikikomori). Ozge Kilic will talk about her experience in youth-specific care and discuss their study on functionality and mental health outcomes in the college population. (This workshop is being proposed for the ECPC track by ECPC Task Force on Research).
Session Icon

Attention deficit and hyperactivity disorder (ADHD) is a common neurodevelopmental disorder in children. Its primary clinical features include symptoms of inattention and hyperactivity/impulsivity, although young people often present with emotional dysregulation, excessive mind-wandering and executive dysfunction. Symptoms of ADHD often persist into adulthood together with high rates of comorbidity and significant psychosocial impairment across the lifespan. Berry, Shaywitz and Shaywitz proposed over 30 years ago that girls with ADHD form a 'silent minority' with greater internalized behavior which leads them to be under-identified. Even when referred for clinical assessment, their ADHD symptoms are missed or misdiagnosed for other conditions such as anxiety, depression and personality disorder. This means they will not receive the treatment they need. Compared with controls, they may be especially vulnerable to childhood adversities and health problems and they may cope with these difficulties with dysfunctional strategies (eg. with substance misuse and/or deliberate self-harming behaviours). If we are to enhance long-term outcomes in girls and women with ADHD, healthcare practitioners need to better understand the presentation of ADHD in females, improve detection and assessment of ADHD in order that they may access appropriate treatment. This workshop will focus on the differences in presentation and outcomes between males and females with ADHD.