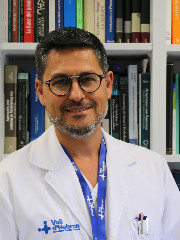 Hospital Universitari Vall d'Hebron. Universitat Autònoma de Barcelona Department of Psychiatry
Prof. Ramos-Quiroga (MD,PhD) is Head of Department of Psychiatry and President of Innovation Commission at Hospital Universitari Vall d’Hebron in Barcelona and Professor of Psychiatry at Department of Psychiatry and Forensic Medicine of the Universitat Autònoma de Barcelona. His work is focused on neurodevelopmental disorders across the lifespan, mainly ADHD and ASD, and treatment resistant depression. Also, he was the Chair of the Section Neurodevelopmental disorders across the lifespan of the European Psychiatry Association (2015-2020). He has published more than 220 articles in SCI journals (H index: 42). He has carried out different studies on eHealth and developed mobile applications in mental health. He is the coordinator of the H2020 project DISCOvERI and PI in H2020-IMI-2 project EU-PEARL, both focused on major depression and treatment resistant depression. Finally, he is PI in several H2020 projects about neurodevelopmental disorders across lifespan (TIMESPAN, Eat2beNICE, CoCA, MiND and Aggressotype).

Course 01: Comorbidities of ADHD Across the Lifespan

Date
Sat, 10.04.2021
Session Time
14:00 - 16:00
Room
Courses Hall A
Chair(s)
Session Description
Attention-Deficit/Hyperactivity Disorder (ADHD) is a chronic neurodevelopmental disorder that is characterized by attentional problems, deficient impulse control, hyperactivity and often also by emotional dysregulation. ADHD has its onset in childhood and affects approximately 5% of children. In over half of the individuals with ADHD, symptoms persist into adulthood and even old age. World-wide, ADHD in adulthood is under-recognised and under-treated. Undiagnosed or untreated ADHD in adulthood is problematic, because it often co-occurs with other psychiatric and somatic illnesses. Among the most prevalent ones are major depression, anxiety, substance use and obesity. These comorbid conditions considerably contribute to the disease burden of individuals, as well as to healthcare costs. In many instances, individuals with ADHD drop out of psychiatric healthcare in the transition from childhood to adult services. Later in life, they often return with symptoms of comorbid conditions; their ADHD often is not recognised at that point and there is a danger that they might receive treatments for their comorbid problems without awareness and adequate care for the underlying ADHD. Providing care throughout the lifespan, but especially in young adults, may therefore be pivotal to reducing this negative developmental trajectory later in life. In this course, experts in adult ADHD will inform clinical psychiatrists about the prevalence and characteristics of ADHD in adulthood and its most common comorbid conditions across the lifespan. Using real life examples of cases, participants will practice how to diagnose ADHD in the context of comorbidity, and discuss different (pharmacological and non-pharmacological) treatment and psychotherapy options.
Session Icon

LIVE - Symposium: Autism Spectrum Disorder: Challenges in the Assessment and Management Across the Lifespan

Date
Sun, 11.04.2021
Session Time
15:30 - 17:00
Room
Channel 3
Chair(s)
Session Description
Proposed by the EPA Section on Child and Adolescent Psychiatry and Neurodevelopmental Disorders Across the Lifespan (NDAL) -Autism spectrum disorder (ASD) is a neurodevelopmental disorder with a high prevalence, i.e. Centers for Disease Control and Prevention reported that 1 in every 54 (1.9%) 8-year-old children had been identified as having ASD in 2016. The symptoms of ASD – which are associated with significant impairment in family, social and/or educational, occupational, or other important areas of functioning - typically present in early childhood, and always persist into adulthood. Therefore proper assessment and comprehensive management of ASD is necessary across the lifespan. Moreover, individuals with ASD often present with comorbid disorders, i.e. altogether 70% of people with ASD have at least one co-occurring psychiatric disorder. The most common comorbidities next to ASD are mood disorders, anxiety disorders, and attention deficit hyperactivity disorder. All these can often lead to challenges in the assessment and management of ASD. The lectures of the symposium aim to help clinicians’ work in the field of ASD across the lifespan. The speakers are professionals from child to adult mental health services as well. The topics of the presentations include: 1) the introduction of a new semi-structured clinical interview designed to support healthcare practitioners in assessing ASD in children, young people, and adults (Susan Young). 2) the demonstration of challenges in the treatment of patients with ASD and comorbid ADHD through clinical cases (Judit Balazs). 3) Pharmacological treatment of adult Autism Spectrum Disorder (Josep Antoni Ramos-Quiroga), 4) Psychological management of adult Autism Spectrum Disorder (Kobus van Rensburg).
Session Icon

Conference Calendar
LIVE - Symposium: Autism Spectrum Disorder: Challenges in the Assessment and Management Across the Lifespan (ID 322) No Topic Needed

Comorbidities of ADHD Across the Lifespan

O285 - Sleep in adults with autism spectrum disorder and ADHD: A meta-analysis.

Sleep-related problems have been frequently

To perform a meta-analysis (PROSPERO's CRD42019132916) on sleep disturbances in adults with ASD and/or ADHD.

A total of 1126 studies and 66 references were identified by electronic and manual searches, respectively. Of these, 42 studies were included in the meta-analysis.

Results showed that both disorders share a similar sleep-impaired profile with higher sleep onset latency, poorer sleep efficiency, greater number of awakenings during sleep, and a general lower self-perceived sleep quality compared with healthy controls. A higher proportion of N1 sleep was found in ASD participants, while a greater Periodic Limb Movements in Sleep is specific in ADHD adults.

Sleep is impaired by several sleep problems and disorders in both ASD and ADHD adults. More research is needed to develop more awareness in mental healthcare, and better treatment of this impairing comorbidity in ASD and ADHD

Hide
LIVE - Symposium: Autism Spectrum Disorder: Challenges in the Assessment and Management Across the Lifespan (ID 322) No Topic Needed