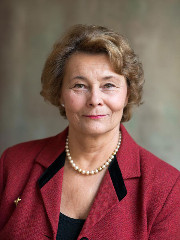 Karolinska Institutet CHIS National Centre for Suicide Research and Prevention of Mental Ill-Health
Danuta Wasserman (DW) is a psychiatrist and Univ. Prof. Dr. Med. in Psychiatry and Suicidology at Karolinska Institutet (KI), and the current Director and Founding Head of the National Centre for Suicide Research and Prevention of Mental Ill-Health (NASP) at KI, since 1993. DW has been appointed as the Director of the WHO Collaborating Centre for Research, Methods Development and Training in Suicide Prevention since 1997 and assists in the development of mental health promotion and suicide preventive programs on five continents. She is the former President of the European Psychiatric Association (EPA) and the International Academy of Suicide Research (IASR). She is serving on the Board of the EPA and presently Chairs the Committee on Ethics. DW was the Chair and is presently the Co-Chair of the Suicidology Section at the World Psychiatric Association (WPA). She is also a member of the planning committee of the WPA. DW was elected President-Elect for the WPA 2020. DW is the former Chair of the Public Health Sciences Department at KI and developed masters and PhD programs for candidates in low- and middle-income countries, as well as mental health care programs for clinical psychiatrists with a focus on psychiatric disorders and suicide. DW is an Expert Advisor to the World Health Organization (WHO) for the Mental Health Gap Action (mhGAP) Programme which operates in low- and middle-income countries to improve services for neurological, mental and substance use disorders. She serves as an expert to UNICEF programme on mental health among adolescents at the population level and in the Helping Adolescents Thrive (HAT) programme, aimed at developing guidelines on mental health promotion and preventive interventions for adolescents in collaboration with WHO. DW provides technical support to the WHO member states and has projects in central and eastern Europe, Asia, Africa, Latin America as well as United States and Australia. Professor Wasserman is the Honorary Fellow of the Royal College of Psychiatrists in the UK, Honorary Member of the Hungarian Psychiatric Association and Honorary President of Estonian-Swedish Mental Health Institute. She served as an international advisor to the Japanese Society of Psychiatry and Neurology. DW has won numerous national and international honors and awards, including the Public Health Prize from the Nordic Council of Ministers of Health for the outstanding contribution to public mental health research and prevention, the Distinguished Research Award from the American Foundation for Suicide Research (AFSP), the Hans Rost Prize from the German Association for Suicide Prevention for the outstanding contribution to suicide research and prevention, the Stengel Research Award for outstanding contributions in the field of suicide research and prevention from the International Association for Suicide Prevention and Crisis Intervention (IASP), and from the British Medical Association (BMC) Board of Science Award for the Public Understanding of Science for her book Depression: the facts published by Oxford University Press. DW is recipient of the H M The King’s of Sweden gold medal. DW is the author of numerous scientific articles, reports and book chapters. She is the editor of the Oxford Textbook of Suicidology and Suicide Prevention: A Global Perspective, published by Oxford University Press in 2009 which is updated and new edition 2020 is in press. Her comprehensive book for busy clinicians and the broad audience interested in suicide prevention “Suicide an unnecessary death” published by Martin Dunitz (2001), has been translated into Chinese, Japanese and Russian and updated for a new edition by the Oxford University Press (2016). DW’s research activities comprise epidemiological, psychodynamic and genetic studies of suicidal behaviours. In 2009, she received the honour from the Nobel Assembly at Karolinska Institutet, to organize the “Nobel Conference on the role of genetics in promoting suicide prevention and the mental health of the population.” She was responsible for organizing several national and international conferences in psychiatry and suicidology. DW is the Principle Investigator for large-scale randomized controlled trials (RCT), “Saving and Empowering Young Lives in Europe (SEYLE)” and “Working in Europe to Stop Truancy Among Youth (WE-STAY),” assessing the effectiveness of different intervention approaches and prevention strategies for adolescents. Both RCTs are funded with €3 million each by the European Union (EU). DW leads also a large RCT in Sweden 2016 – 2020 involving 163 schools, with the aim to test the effectiveness of the mental health promoting, Youth Aware of Mental Health (YAM) program in comparison to a control group. DW is the Swedish site-coordinator of the NEVERMIND RCT-project (NEurobehavioral predictiVE and peRsonalized Modeling of depressIve symptoms duriNg primary somatic Disorders through ICT-enabled, self-management procedures) and POTION, an RCT studying promotion of social interaction through emotional body odours. Both projects are funded during 2017-2023 by the European Union, Horizon 2020 Framework program. Since 2000, she serves as the Principle Investigator for the Genetic Investigation of Suicide and Attempted Suicide Project (GISS project), funded by the Knut and Alice Wallenberg Research Foundation in Sweden. DW serves as a scientific consultant to Columbia University, Texas University and Montana State University in the United States. Professor Wasserman is also the chair and a member of several national and international working groups on mental health promotion and suicide prevention.

Date
Sun, 11.04.2021
Session Time
17:30 - 19:00
Room
Channel 3
Chair(s)
Session Description
Ironically, our beloved globalization brought us a new dystopia, in which the fight against the COVID-19 epidemic led to place half of humanity in quarantine. It is well known that psychosocial stressors and protective factors are linked in a multitude of ways to longevity: risk of suicide and psychosocial stress/social support, psychopathologies such as depression, post-traumatic stress disorder and others that impact the body, and the lifestyle that may modify social connectivity. Patients with psychiatric disorders are particularly vulnerable to the negative consequences of the outbreak. Dominik Moser will discuss the mechanisms and quantifications of the social distancing in term of adverse consequences on health. Pilar Saiz will present data on the prevalence and risk factors of suicidal ideation in the Spanish general population early in the COVID-19 pandemic. Emilie Olié will characterize the psychological impact of the French lockdown in a cohort of patients suffering from mood disorders followed up 6 months. Danuta Wasserman will present a Swedish perspective (Sweden being an exception in the collective management of the pandemic) and ethical issues raised by not protecting sufficiently the elderly population. These presentations will help to better monitor psychosocial needs and to deliver support to patients in the age of COVID-19.
Session Icon

LIVE - EPA, EAN and EFPA Symposium: You Can Tell a Good Workman by His Tools: The Instruments of Psychiatrists, Psychologists and Neurologists. Why so Different?

Date
Mon, 12.04.2021
Session Time
10:00 - 11:30
Room
Channel 2
Chair(s)
Session Description
The proposed session is a three presentations symposium, under the umbrella of EPA, the EAN and the EFPA
Session Icon

Date
Mon, 12.04.2021
Session Time
17:30 - 19:00
Room
Channel 2
Chair(s)
Session Description
In this session we will discuss topics of interest to early career psychiatrists, facing challenges in their training education and in their work conditions. We will hear from a psychiatric trainee about their experiences of training as a psychiatrist during a pandemic, we will hear the key messages on how to train in digital mental health, and have advice from experienced senior clinical academics on how should one start a career as a consultant psychiatrist.
Session Icon

Conference Calendar
LIVE - EPA, EAN and EFPA Symposium: You Can Tell a Good Workman by His Tools: The Instruments of Psychiatrists, Psychologists and Neurologists. Why so Different? (ID 821) No Topic Needed

Session Name
LIVE - EPA, EAN and EFPA Symposium: You Can Tell a Good Workman by His Tools: The Instruments of Psychiatrists, Psychologists and Neurologists. Why so Different? (ID 821)
Session Icon

Every year, around 800,000 people die by suicide globally. Whist suicide mortality rates are higher among men, women typically have higher rates of suicidal ideation and behaviours. Despite this fact, suicidality in women is still of grave concern as 71% of women’s violent deaths is accounted for by suicide – a greater percentage than men’s. Suicide patterns among women differ between countries and regions. For example, there is a greater difference in suicide rates between men and women in high-income countries in comparison to low- and middle-income countries. Furthermore, many theories exist to explain women’s suicidality. Yet many of the dominant theories have been challenged from studies in both low- to middle-income and high-income countries. Further research that focuses on the context and culture, rather than the individual, is warranted and will be important for preventative efforts of women’s suicidal behaviours.

As COVID-19 spread, many countries in the world responded swiftly in an attempt to reduce transmission. Sweden, however, took a different approach to many other nations and did not implement a nationwide lockdown, instead deciding on a more “holistic approach to public health”. The focus was on minimising transmission as much as possible, protecting those in risk groups, ensuring that the response strategies were sustainable long-term, mitigating other health concerns as a result of the response and that evidence-based methods were used as much as possible. At this stage, it is difficult to know how exactly the Swedish strategy has fared in comparison to other responses. In Sweden, there has been much debate about the strategy, particularly concerning the protection of the elderly due to unexpectedly high mortality rates in the older population as well as among residents in retirement homes. Many ethical questions remain in regard to which strategies would have been preferable.

Hide
Workshop: Practical Suggestions on the Clinical, Ethical and Economic Consequences of the COVID-19 Pandemic on Mental Health (ID 271) No Topic Needed

As COVID-19 began to plague the world, the term ‘social distancing’ was frequently used, encouraging people to keep a safe physical distance from others to reduce the transmission of the virus. Despite being well-intended, the term has negative implications, further isolating vulnerable groups in society by evoking feelings of rejection and exclusion. For this reason, the members of the European Psychiatric Association Ethics Committee wrote an e-letter in response to an opinion piece published by Science (https://science.sciencemag.org/content/367/6484/1282/tab-e-letters), and also wrote to the European Psychiatry (https://doi.org/10.1192/j.eurpsy.2020.60) and the World Health Organisation explaining why the term ‘physical distancing’ should instead be used among policymakers, governments and the general public. Words are important and carry great meaning. Therefore, by using the term physical distancing and not social distancing the message becomes clear, individuals should remain physically distant but socially connected to protect the vulnerable communities in societies. The World Health Organisation, as well as the Lancet journals, adopting the term physical distancing in replacement of social distancing, was a rewarding and important step in the right direction.