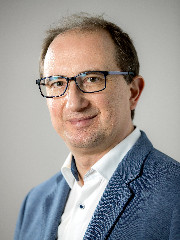 Örebro University School of Medical Sciences
Professor Matej Orešič holds a PhD in biophysics from Cornell University (1999; Ithaca, NY, USA). He is a Professor of Medical Sciences at Örebro University (Sweden), group leader in systems medicine at the University of Turku (Finland), and a guest professor in lipids and nutrition at the Oil Crops Research Institute in Wuhan (China). As of 2016, he was made a Lifetime Honorary Fellow of the Metabolomics Society. He previously served as member of the Board of Directors of the Metabolomics Society for two, consecutive terms (2008-2012). Prof. Orešič is one of the founders of the Nordic Metabolomics Society and currently its chair of the board. In 2019, he co-chaired the 1st Gordon Research Conference on ‘Metabolomics and Human Health’ (Ventura, CA, USA). Previously, he also chaired the Keystone Symposium on Systems Biology of Lipid Metabolism (2015; Breckenridge, CO, USA). Prof. Orešič’s main research areas include metabolomics applications in biomedical research and systems medicine. He is particularly interested in the identification of disease processes associated with different metabolic phenotypes and the underlying mechanisms linking these processes with the development of specific disorders or their co-morbidities, with a central focus on both type 1 diabetes and non-alcoholic fatty liver disease. Prof. Orešič also initiated the popular MZmine open source project, which led to the development and release of popular software for metabolomics data processing.

Date
Sun, 11.04.2021
Session Time
10:00 - 11:30
Room
Channel 4
Chair(s)
Session Description
The Live Q&A of this session will take place in the Live Sessions auditorium. Please refer to the interactive programme for the exact time and channel. Proposed by the EPA section on Neuroimaging -One of the major limitations of current therapeutic management of psychoses is the lack of predictive, personalised medicine tools that could inform clinicians’ as choice of treatment for individual patients, aiming to improve functional outcomes while preventing adverse metabolic side effects (e.g., weight gain, metabolic syndrome, diabetes). In current clinical practice, poor efficacy or adverse side effects of treatments can present months after commencement of treatment. Even if therapy is adjusted, it might already be too late for the patient to fully recover from such comorbidity. Therefore, prompt identification of a patient’s risk profile is essential for selecting an optimal preventative therapeutic strategy. In a personalised medicine approach to disease treatment and prevention of comorbidities, a patient would first undergo a comprehensive screening by a range of diagnostic tools, which would predict the patient’s mental, functional and somatic outcomes given various lines of treatment, and thus help identify the optimal treatment strategy. Recent research using molecular profiling approaches (such as metabolomics) and neuroimaging suggests that such prediction of patient outcomes, even in individuals at clinical high risk for psychosis, may be feasible. The aim of this Symposium is to cover recent advances in the domain of outcome prediction, with specific focus on use of high-dimensional and multi-modal data such as from ‘omics’ and neuroimaging.
Session Icon

Lipid metabolism has been an area of increased interest in psychosis research, not only due to its link to metabolic comorbidities, but also due to its putative role in the pathophysiology of psychosis.

Lipid disturbances are observed already in the period preceding the onset of psychosis. For example, we performed mass spectrometry based lipidomics in a cohort of individuals at clinical high risk for psychosis (the EU-GEI study) and found that the individuals who transitioned to psychosis within a 2-year follow-up period displayed decreased levels of ether phospholipids. This finding may be of direct (patho)physiological relevance, as ether phospholipids (particularly plasmalogens, a major subgroup of ether phospholipids) are highly enriched in the brain, are supplied to the brain by the liver, have many structural and functional roles, and may act as endogenous antioxidants.

Accumulating evidence also suggests that lipid disturbances play a crucial role in the development of metabolic comorbidities associated with psychotic disorders. Our lipidomic studies have shown that psychotic patients who rapidly gain weight during follow-up have elevated triglycerides (TGs) with low double bond count and carbon number at baseline. These TGs are known to be associated with non-alcoholic fatty liver disease (NAFLD) and with increased risk of type 2 diabetes.

In conclusion, although the mechanisms linking dysregulation of lipid metabolism with the pathophysiology of psychosis are currently poorly understood, findings by us and others suggest that metabolic abnormalities are evident in people who are vulnerable to psychosis, and to the associated metabolic comorbidities.