Background: Patients with ALL who have relapsed after allo-HSCT have a dismal prognosis. CAR-T cell therapy has shown great success for treating relapsed/refractory B-ALL. Here we have assessed the initial response, duration of remission, and safety, especially cytokine release syndrome (CRS), graft-versus-host disease (GVHD) incidence after CD19 CAR-T therapy for B-ALL patients who relapsed after transplant.

Methods: From February 2016 to May 2019, 32 patients with B-ALL who relapsed post allo-HSCT were enrolled from four different clinical trials. The median age was 22 (2-55) years old. Median bone marrow blasts were 23.89% (0.03-92.43%) before CAR-T infusion, and 12/32 (37.5%) patients had received at least one prior donor lymphocyte infusion. No patients had active GVHD before CAR-T except for one patient who had limited chronic skin GVHD not requiring treatment.
The second generation CD19 CAR-T cells were produced from purified T cells either from transplant donors (12) or patients (20). They contained either a 4-1BB co-stimulatory signal domain in 23 patients or a CD28 domain in 9 patients.
All patients received a conditioning regimen of IV fludarabine (30mg/m2/d) and cyclophosphamide (250mg/m2/d) for 3 days followed by a single infusion of CAR-T cells with a median dose of 2 x105 (0.083-10x105) cells/kg.

Conclusions: Our study demonstrates that a high CR rate can still be achieved through CAR-T therapy even for those who relapsed after allo-HSCT without increasing CRS or neurotoxicity. A second consolidation allo-HSCT may be considered for those who achieved MRD-negative CR after CAR-T. Receiving CAR-T cells that manufactured from transplant donors may result in a trend towards higher GVHD rate compared to autologous CAR-T cells. GVHD should be carefully watched and managed. 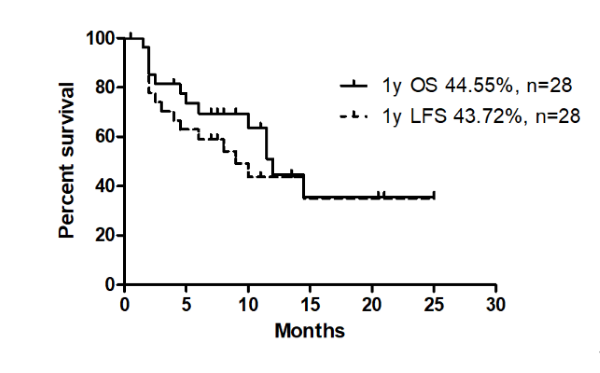 Disclosure: Nothing to declare.