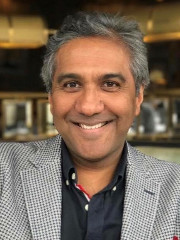 Kausik K. Ray (United Kingdom)
Imperial College London
Department of Primary Care and Public Health
Kausik Ray is currently President of the European Atherosclerosis Society. Professor of Public Health, Director of Imperial Clinical Trials Unit-Global within the School of Public Health, Imperial College London, Consultant Cardiologist and Chief Clinical Officer and Head of Trials –Discover Now as well as NIHR ARC National Lead of Cardiovascular Disease. Professor Ray received his medical education (MB ChB, 1991) at the University of Birmingham Medical School, his MD (2004) at the University of Sheffield, a post-doctoral fellowship at Harvard Medical School and finally an MPhil in epidemiology (2007) from the University of Cambridge. A Fellow of the American College of Cardiology, the European Society of Cardiology, the American Heart Association and the Royal College of Physicians, Prof Ray is also a member of the British Cardiovascular Society. He has served the EAS as a Consensus panel and EAS Executive Committee memeber. Professor Ray has either been the Principal Investigator and lead for several major medical trials, as well as international registries such as Da Vinci, Santorini, CLEAR Harmony, the ORION programme and BETONMACE as well as serving on the Executive Committee of many others. Professor Ray’s research interests have focused on the prevention of coronary disease with a focus on lipids, diabetes, biomarkers and risk prediction. He has an H index of 94, an i10 of 236 and over 106,000 citations for his work in journals such as New England Journal of Medicine, The Lancet, JAMA, EHJ, Circulation and JACC. He has also been included in the Clarivate Analytics’ list of the top 1% most cited authors in all of global medicine in 2018, 2019, 2020 and 2021. Key original contributions which have influenced European and American guidelines as well as FDA and EMEA. Professor Ray leads the EAS FH Studies collaboration which is the first global registry of FH which includes 67 countries and 66,000 cases, as well as being the Senior PI for the TOGETHER study looking at cardiometabolic risk in the vascular health checks in 250,000 people in London.

The epidemiology of DM and obesity and risk of ASCVD

Background: As guidelines now recommend lower LDL-C goals, means that many patients require additional lipid lowering therapies (LLT) to attain risk based LDL-C goals despite use of high intensity statins (HIS). Cost and/or efficacy of current LLT options have limited their uptake in clinical practice. Mendelian randomization and RCT trial data support CETP inhibition as a validated target to reduce LDL-C and cardiovascular risk. Safety and efficacy concerns have to date limited the development of CETPi. Previously the selective CETPi obicetrapib demonstrated LDL-C lowering up to 45% as monotherapy.

Aims: To assess the effects of obicetrapib on LDL-C and lipid parameters in patients on HIS.

Methods: 120 patients with LDL-C ≥70 mg/dL, despite HIS, were randomized to obicetrapib 5 or 10 mg or placebo for 8 weeks. The primary endpoint was percent change in LDL-C, secondary endpoints included changes in other lipids, exploratory analyses evaluated goal attainment.

Results: Obicetrapib produced dose-dependent lowering of LDL-C, ApoB and non-HDL-C (up to 50.8%, 29.8% and 44.4% respectively, P<0.0001 for each, Table). Approximately 2/3 of patients achieved LDL-C < 55mg/dl when Obicetrapib was added to HIS vs PL. Fewer patients in the OBI arms experienced treatment emergent adverse events vs placebo (26 vs 48%) with no clinically significant changes in laboratory parameters, vital signs, or physical examinations. 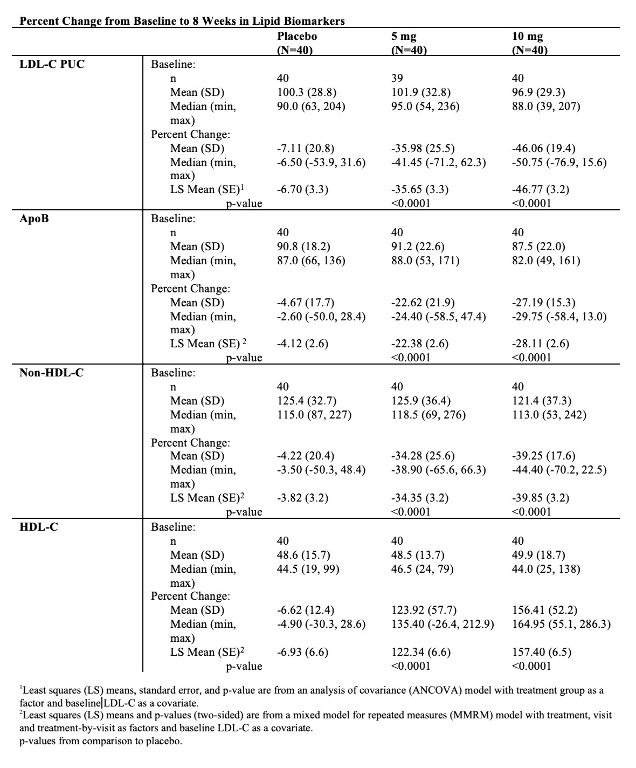 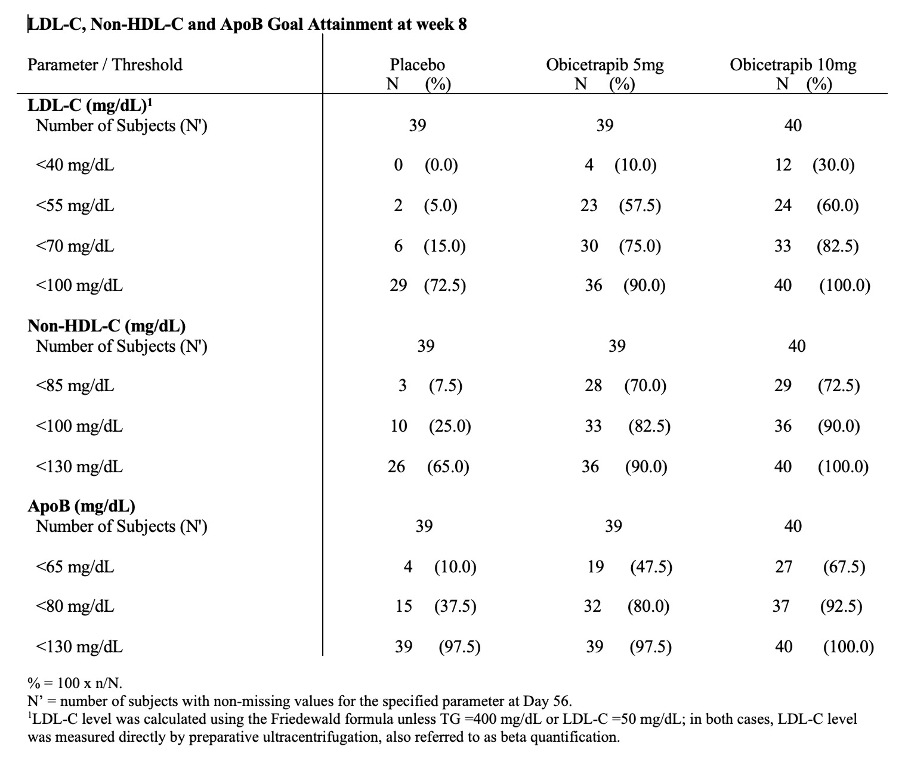 Conclusion: Obicetrapib 5 and 10 mg produced robust decreases in LDL-C, ApoB and Non-HDL-C with greater attainment of lipid goals in the majority of patients treated with HIS and was well tolerated.

Plenary 1: Personalised approach to ASVD: The future is here

Debate: Who needs injectable therapies for cholesterol lowering? Statins and ezetimibe are enough for CVD prevention