EFFECT OF YOGA ON REDUCING GLYCEMIC VARIABILITY IN INDIVIDUALS WITH TYPE 2 DIABETES: A RANDOMISED CONTROLLED TRIAL

Glycemic variability is a known risk factor for cardiovascular complications in type 2 diabetes mellitus (T2DM). Yoga is a moderate intensity physical activity and is considered to be beneficial for patients with T2DM. The objective of the current study is to understand the effect of yoga on glycemic variability.

Individuals with T2DM (n=60) of both genders, 40-70 years of age, HbA1C between 7% - 8.5% were recruited from a tertiary referral centre for diabetes. Subjects were randomly assigned to either intervention (yoga) or control (brisk walking) group. During the first 7 days, baseline glycemic variability was established using Freestyle Libre pro flash glucose monitoring system, followed by 7 days of either one hour of yoga or walking per day. A traditional validated yoga module was taught. Data on glycemic variability was obtained on baseline, day 7 and 14.

Short term yoga practice has shown a statistically significant reduction in the glycemic variability in T2DM when compared to brisk walking, inspite of a similar reduction in mean blood glucose levels.

URLi is a novel insulin lispro formulation that shows accelerated absorption and improved postprandial glucose control compared to lispro. We evaluated the compatibility and safety of URLi vs. lispro in patients with T1D currently using CSII. Primary endpoint was the rate of infusion set failures due to a pump occlusion alarm, or unexplained hyperglycemia with blood glucose >250 mg/dL (13.9 mmol/L) that did not decrease within 1 hour following a correction bolus delivered via the pump.

This Phase 3, double-blind, crossover study included 6 weeks of each treatment after a 2-week lead-in period on lispro. Forty-nine patients were randomized. Boluses were initiated 0-2 minutes prior to meals. Patients were required to

A higher incidence of treatment-emergent adverse events (TEAEs) was observed for URLi, driven by infusion site reaction and pain, which was mostly reported by one investigative site. Over 90% of these were mild severity. Incidence of all other TEAEs was low and similar between groups. 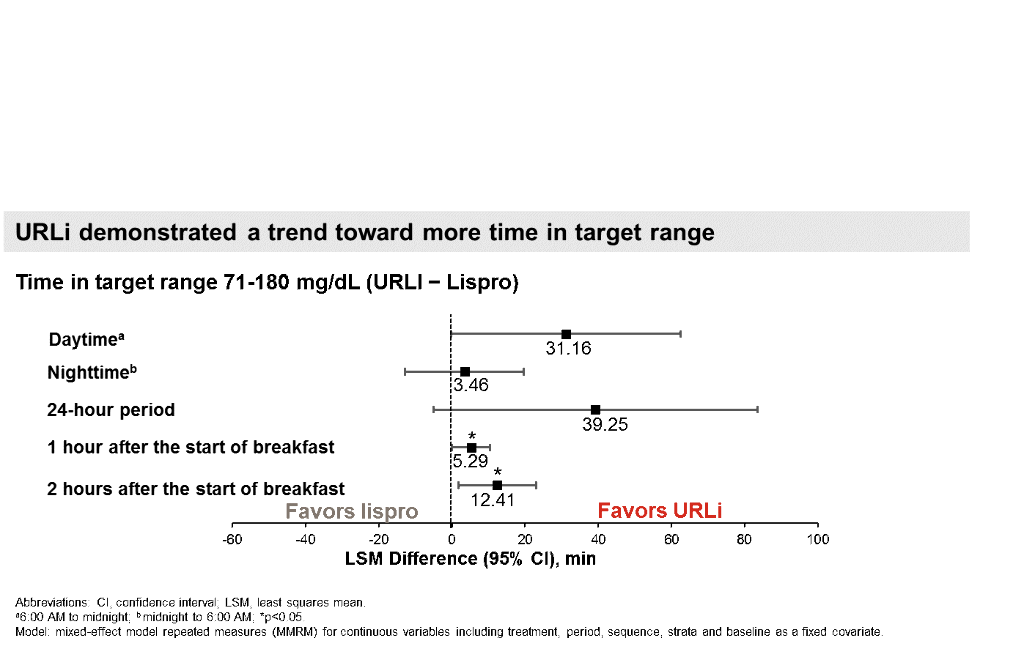 URLi was compatible with CSII use with a safety profile similar to lispro. URLi demonstrated a trend towards improved glycemic control in patients with T1D.

EFFICACY, SAFETY AND IMMUNOGENICITY IN PEOPLE WITH DIABETES ON MDI USING SAR341402 OR INSULIN ASPART TOGETHER WITH BASAL INSULIN GLARGINE (GLA-100): GEMELLI-1 STUDY

SAR341402 (SAR-Asp) was developed as a biosimilar/follow-on to rapid-acting insulin NovoLog®/NovoRapid® (NN-Asp). Efficacy and safety results, including immunogenicity, for SAR-Asp and NN-Asp in patients with type 1 diabetes (T1DM) or type 2 diabetes (T2DM) are similar. Further subgroups analyses were done by baseline factors (age, ethnicity, race, BMI, duration of diabetes and HbA1c).

597 participants were randomized, with similar baseline characteristics in both treatment groups. The mean change in HbA1c at Week 26 was similar in both treatment groups in the total cohort as well as in subgroup analyses based on baseline BMI (≥30 vs <30 kg/m2), duration of diabetes (≥10 or <10 years), eGFR (≥60 vs <60 mL/min/1.73 m2), and ethnicity (Table). In these subgroups, the incidence of hypoglycaemia, especially severe hypoglycaemia (SAR-Asp 4.0%; NN-Asp 3.4%), was similar in participants who received SAR-Asp and NN-Asp. The immunogenicity data and TEAEs in subgroups were also consistent with the overall population (Table). 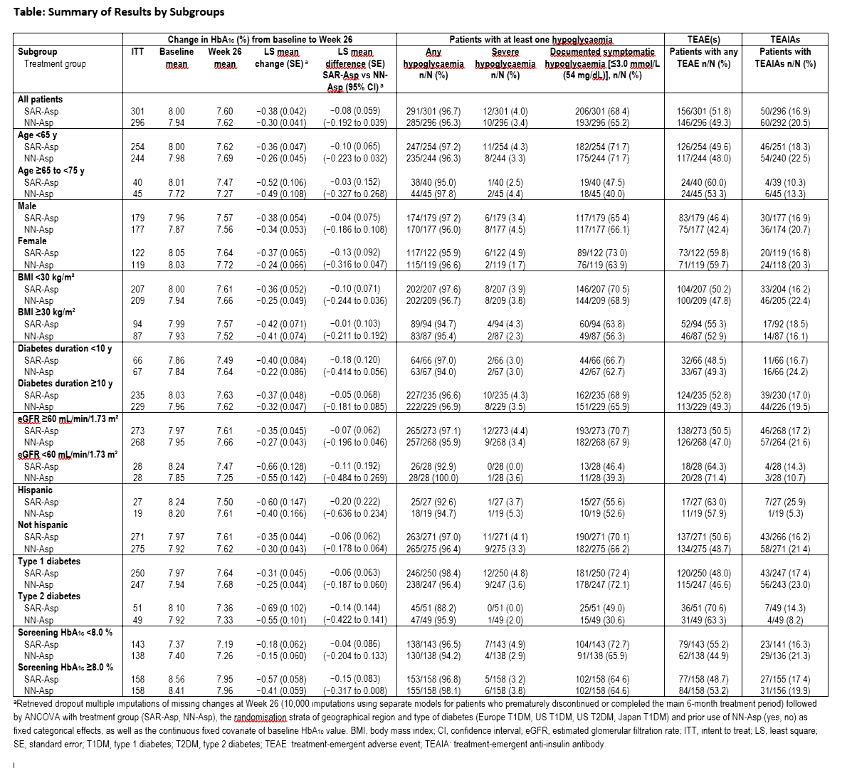 SAR341402 was as effective and well tolerated as insulin aspart in people with T1DM or T2DM regardless of the baseline characteristics.

EFFICACY OF ORAL SEMAGLUTIDE ACCORDING TO BASELINE HBA1C: AN EXPLORATORY SUBGROUP ANALYSIS OF THE PIONEER TRIAL PROGRAMME

This exploratory subgroup analysis of the PIONEER programme evaluated the effect of baseline HbA1c on overall HbA1c and bodyweight reductions achieved during each trial. 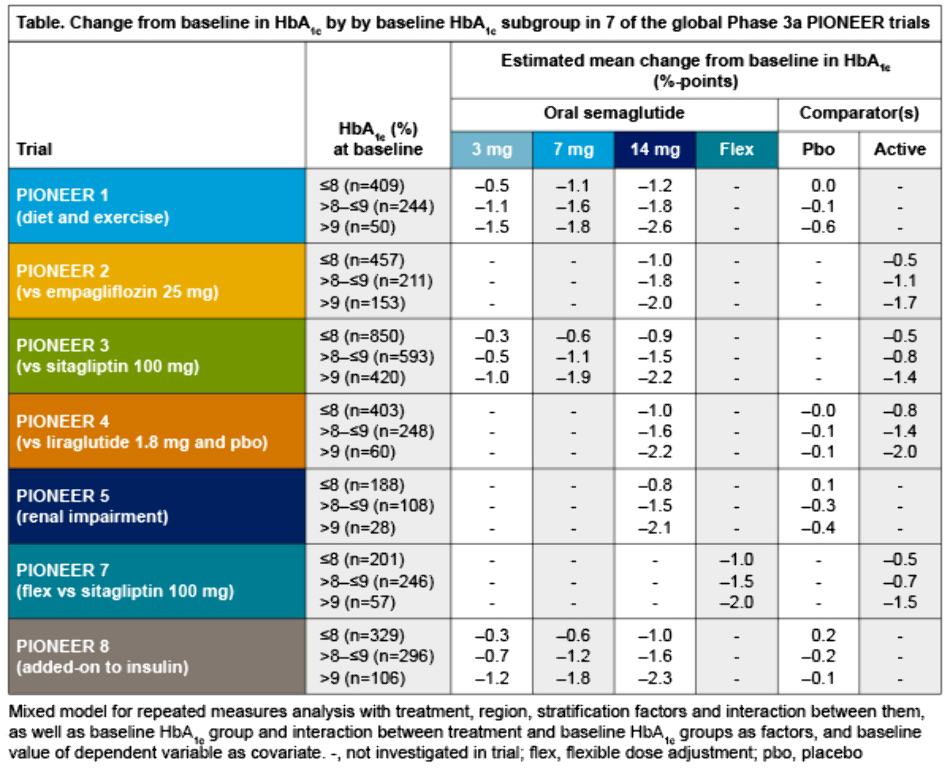