In BRIGHT (NCT02738151), Gla-300 showed similar glycaemic improvements to IDeg over 24 weeks in insulin-naïve participants with T2DM, with 24h hypoglycaemia incidence and rates being comparable between treatments during the maintenance and full-study periods, but lower with Gla-300 during the titration period. Older age and impaired renal function can increase hypoglycaemia risk; we evaluated the impact of baseline age and renal function on glycaemic and hypoglycaemia outcomes in BRIGHT.

BRIGHT was an open-label, actively-controlled, parallel-group trial in people with T2DM randomised to Gla-300 (N=466) or IDeg (N=463). This post-hoc analysis evaluated HbA1c change and incidence and rates of 24h confirmed (≤3.9mmol/L [≤70mg/dL]) hypoglycaemia over 24 weeks, by age and renal function subgroups.

HbA1c reduction was greater with Gla-300 versus IDeg in participants ≥70 years, with significant heterogeneity of treatment effect between ≥70 and <70 years subgroups (p=0.0087). Hypoglycaemia incidence and rates were similar between treatments in both groups. Significant heterogeneity of treatment effect across renal function groups for HbA1c reduction (p=0.015) reflected greater HbA1c reduction with Gla-300 versus IDeg in patients with impaired renal function (eGFR <60 mL/min/1.73m2). Hypoglycaemia incidence was similar with Gla-300 and IDeg across all eGFR subgroups. Hypoglycaemia rates were similar between treatments in participants with eGFR <60 mL/min/1.73m2, though lower with Gla-300 versus IDeg in those with normal renal function (eGFR ≥90 mL/min/1.73m2).

In people with T2DM at high risk of hypoglycaemia (≥70 years, impaired renal function), Gla-300 provided greater reductions in HbA1c versus IDeg, without increased incidence or rates of hypoglycaemia.

LOWER RISK FOR SEVERE HYPOGLYCEMIA WITH GLA-300 VS. GLA-100 IN PATIENTS WITH TYPE 1 DIABETES (T1D): A META-ANALYSIS OF 6-MONTH PHASE 3 CLINICAL TRIALS

All trials were similarly designed and achieved their primary endpoint of HbA1c non-inferiority of Gla-300 versus Gla-100. EDITION 4 (n=549) and JUNIOR (n=463) were conducted worldwide and EDITION JP1 (n=243) was conducted in Japan. EDITION 4 and EDITION JP1 studied adults aged ≥18 years; JUNIOR enrolled participants aged 6–17 years. In total, 629 participants received Gla-300 and 624 received Gla-100 together with prandial insulin. Severe hypoglycemia was defined in adults as a hypoglycaemic event that required assistance of another person to actively administer carbohydrate, glucagon, or other resuscitative actions, and in children and adolescents as having altered mental status and inability to assist in their care, being semiconscious or unconscious, or in coma ± convulsions requiring possible parenteral therapy (glucagon and/or glucose). 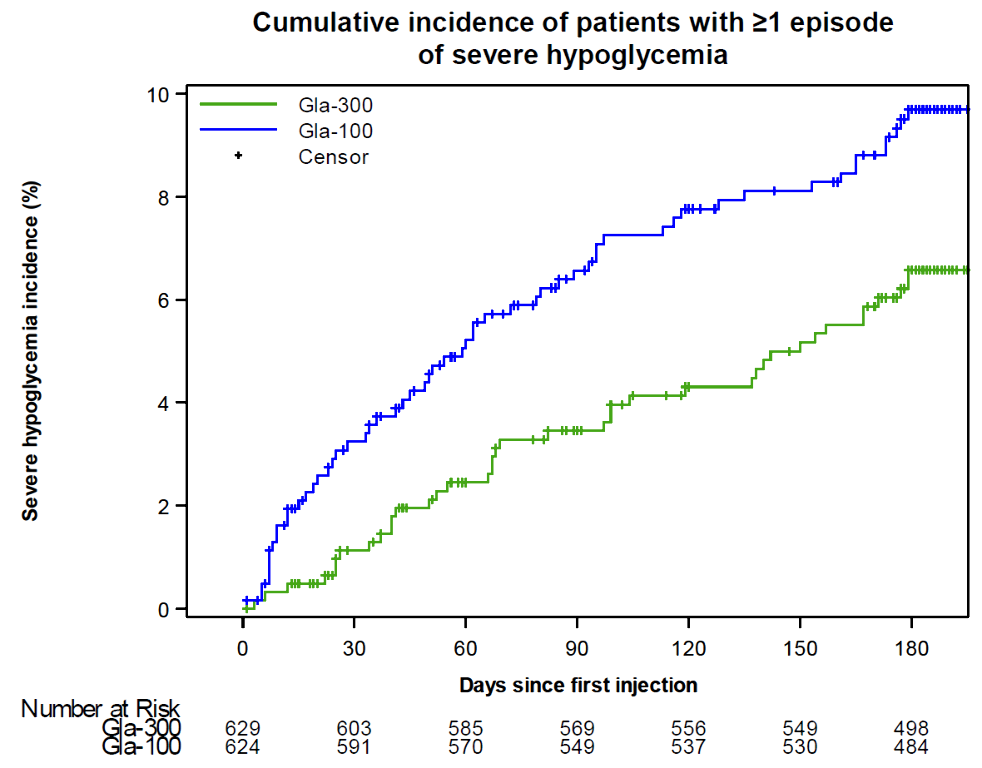 Gla-300 showed a lower risk for severe hypoglycemia compared to Gla-100 in people with T1D.

Insulin glargine 300 U/mL (Gla-300) and insulin degludec 100 U/mL (IDeg-100) have shown slightly different pharmacokinetic/pharmacodynamic profiles; however, the first head-to-head randomised controlled trial in insulin-naïve people with type 2 diabetes (T2D) demonstrated similarity in clinical endpoints, except during the 0–12 week period when results were in favour of Gla-300 for anytime hypoglycaemia.

InRange aims to assess the clinical impact of Gla-300 and IDeg-100 in people with T1D by assessing primarily continuous glucose monitoring (CGM) endpoints.

Approximately 340 people with T1D aged 18–70 years, on a basal + mealtime insulin regimen for ≥1 year, and HbA1c ≥7 % and <10 % will be included. Screening (1–2 weeks) will be followed by a 4-week run-in (background insulin treatment optimisation including 2-weeks baseline CGM) and a 12-week randomised treatment period after basal insulin switch to Gla-300 or IDeg-100 (titrated to the target glucose range without hypoglycaemia). During the randomised period, CGM will be performed at weeks 11–12 according to the most recent CGM consensus statement and ADA guidelines. The primary endpoint will be analysed using a mixed-effect model with repeated measures approach.

The objectives are to assess the percentage time in range for glucose (70–180 mg/dL [3.9–10 mmol/L]) (primary endpoint) at week 12, and glucose variability (reported as coefficient of variation [total, within day, between day]); in addition to other clinical outcomes including occurrence and frequency of hypoglycaemia (severe; documented symptomatic; and asymptomatic (<70 mg/dL [<3.9 mmol/L], <54 mg/dL [<3.0 mmol/L])).

SWITCHING FROM NPH INSULIN TO GLARGNIE U300 RESULTS IN SIGNIFICANT DECREASE OF HBA1C AND REDUCTION OF HYPOGLYCEMIA RISK – RESULTS OF MULTICENTER, PROSPECTIVE OBSERVATIONAL STUDY

We conducted a national, observational, multicenter, prospective, 24-weeks product registry. The primary endpoint was percentage of patients reaching HbA1c reduction of 0.5% or more at the end of the study (EOS); the secondary endpoints were: FPG and HbA1c level at EOS and change from baseline, number of of participants, who experienced ≥1 episode of symptomatic nocturnal hypoglycemia.

THE FORGOTTEN POPULATIONS: REAL-WORLD PATIENTS WITH T2DM NOT MEETING ELIGIBILITY CRITERIA OF THE GLARGINE 300 U/ML EDITION AND BRIGHT RCTS

Randomised controlled trials (RCTs) are the gold standard for comparing therapies’ efficacy and safety but can have strict eligibility criteria and may not reflect real-life clinical practice. Electronic medical records such as those from the Predictive Health Intelligence Environment (PHIE) database may be used to assess clinical effectiveness in real-world populations missed by clinical trials. We describe here the proportion and characteristics of patients with type 2 diabetes mellitus (T2DM) who would have been excluded from RCTs using eligibility criteria adapted from the EDITION 1–3 and BRIGHT trials. 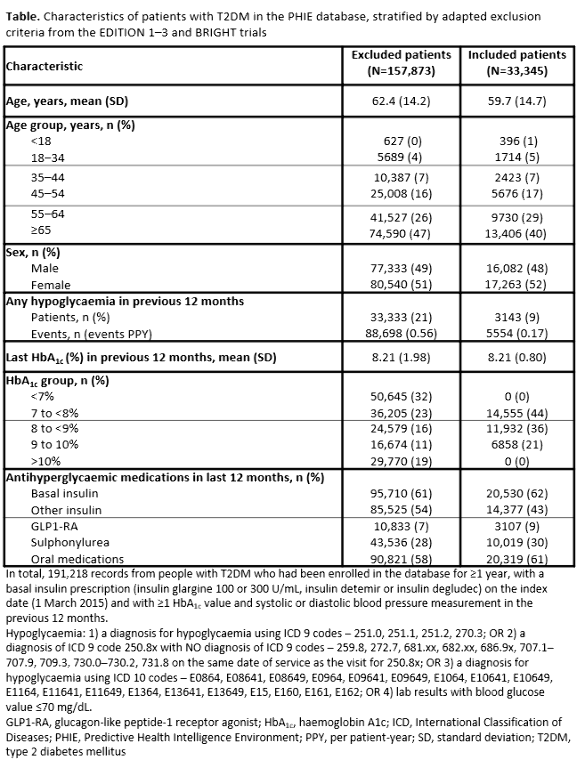 This divergence in clinical characteristics and patient numbers highlights the need for real-world studies assessing clinical effectiveness in populations of interest typically excluded from RCTs.

Obessity is a medical condition in which excess body fat has accumulated to the extent that it may have an adverse effect on health leading to reduced life expentancy(WHO,2000).It is a chronic disorder prevalent in both developed and developing countries.It is one of the most significant contributors to morbid conditions like metabolic syndrom, type-2 diabetes melitus and cardiovascluar disorder(CVD) (Weisbierg et al 2003). People are considered obese when thier body mass index (BMI) exceeds 30kg/m2. Obesity increases the likelyhood of various diseases particularly heart disease. This study was carried out to determine alteration of C-reactive protein in the obesse women and non-obesse women attending treatment at the Federal Medical Center Owerri,South-East,Nigeria.

Regulatory guidelines for insulin products (IPs) development require to test immunogenicity in a reasonable number of patients with type 1 diabetes mellitus (T1DM). The problem of sample size for immunogenicity comparison is substantial in insulin biosimilar development since the required samples are sizeable however still incapable to detect any immunogenicity difference, because the biosimilar and a reference drug are very similar in all terms. The aim of this study was to estimate the input of IP into immune response development.

Blood samples of 180 T1DM patients were taken to estimate an anti-insulin antibody concentration (AIAC) via enzyme-linked immunosorbent assay. The information on insulin international non-proprietory name (INN) was gathered. Influence of basal and bolus insulin INNs on AIAC was estimated with ANOVA. One-to-one comparisons were made with Mann-Whitney U-test.

IP’s input into immune response development was nonsignificant, thus the huge sample is required to detect immunogenicity difference. This leads to dramatic increase of clinical trials cost and breaks the idea of cost-affordable biosimilars. Thus immunogenicity risk assessment should be provided mostly at preclinical stage, and immunogenicity should be studied via pharmacovigilance.

A biosimilar is a biological medicine highly similar to already approved biological reference medicine. The program of clinical trials of insulin biosimilars includes pharmacology studies: pharmacokinetics (PK) – concentration-time and pharmacodynamics (PD) – glucose infusion rate (GIR)-time. The aim of this study was to test if GP40061 – a biosimilar to reference insulin glargine (RIG) – has similar PK and PD profiles in a hyperinsulinemic euglycaemic clamp (HEC) setting in patients with type 1 diabetes mellitus (T1DM).

A double-blind, randomized, crossover study enrolled 42 adult patients with T1DM. The study was conducted in accordance with international guidelines for HEC studies. Each patient received a single dose of insulin (0.6 U/kg) subcutaneously. Regular blood sampling was performed. The amount of insulin glargine in the samples was determined by enzyme-linked immunosorbent assay. The primary endpoints were AUCins.0-24 (PK) and AUCGIR.0-24 (PD).We calculated the 90% (PK) and 95% (PD) confidence intervals (CI) of the GP40061/RIG geometric mean ratio for primary endpoints. Similarity of PK and PD is proved if CIs fall within the specified limits of 80%─125%. Secondary endpoints were AUCins.0-12 and AUCins.12-24 (PK), AUCGIR.0-12 and AUCGIR.12-24 (PD). Safety was also assessed.

A biosimilar is a biological medicine highly similar to already approved reference biological medicine. GP40061 – is a biosimilar to reference insulin glargine (RIG). Its similarity to RIG has been proved through head to head analytical, preclinical and euglycemic clamp comparability studies. A comparative safety (immunogenicity) study of insulin biosimilar and reference drug is the last stage of the development program. This study aimed to confirm the similar immunogenicity of the drugs.

GP40061 demonstrated similar immunogenicity to the RIG. Considering the whole development program, the biosimilarity of GP40061 to reference insulin glargine was proved.

Twelve adult pump-experienced participants with T1D (median HbA1c 6.8% [IQR 6.2-7.2] | 51mmol/mol [44-55]) were commenced on AHCL, and assigned to FiASP or insulin aspart in random-order over two stages (6-weeks duration each). Participants ate a matched standardised 40g carbohydrate evening meal on two occasions (one without a bolus and one with a late bolus administered 20-min post-meal commencement) each during the FiAsp and insulin aspart stages of the study. CGM data 0-4 hours post-meal was analysed by signed rank test.

Trends observed with a missed meal bolus suggest that FiAsp may offer advantages over insulin aspart with regard to full CL function though late meal-time bolus delivery remains a risk for hypoglycaemia. 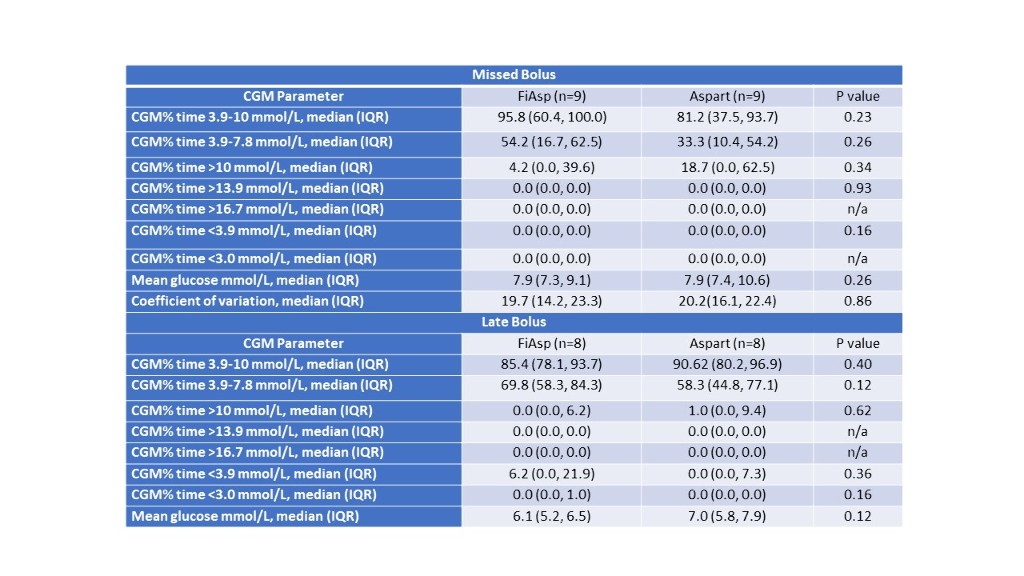 Fast‐acting insulin aspart (fAsp) is a faster‐acting insulin with a more rapid rate of absorption and greater early‐glucose‐lowering effect than conventional insulin (iAsp).

The aim of this study was to assess the postprandial glycemic control in patients with sensor-augmented pump therapy after one month of treatment with fAsp.

Five patients (2males) treated with sensor-augmented pump therapy (at least 6 months prior to the initiation of fAsp) whose age were 41±11 years and basal HbA1c 7,1±0,4%, were included.

Episodes of postprandial hyperglycemia (>140 mg/dL) were analysed before and after one-month treatment with fAsp. Other variables analysed were the area under the curve (AUC) >140 mg/dL, AUC <70 mg/dL, mean glucose and standard deviation (mg/dL), total insulin dose (IU/day) and basal/bolus distribution (%).

Postprandial hyperglycemia episodes (>140 mg/dL) were reduced by 9.1% after one month of treatment with fAsp.

The continuous glucose monitoring results are shown in the following table:

After one-month follow-up with fAsp, hyperglycemia events decreased without increasing the time in hypoglycemia and without changes in the basal/bolus distribution, in patients with sensor-augmented pump therapy.

Hypoglycaemia, especially nocturnal, remains the main limiting factor of achieving good glycaemic control in type 1 diabetes. This study aimed to investigate whether insulin degludec in comparison with insulin glargine U100 is superior in limiting the occurence of nocturnal hypoglycaemia in patients prone to nocturnal severe hypoglycaemia.

Danish investigator-initiated, prospective, randomised, open, blinded endpoint (PROBE), multicentre, cross-over study. Adult patients with type 1 diabetes and at least one episode of nocturnal severe hypoglycaemia during the preceding two years were included. A 1-year plus 1-year treatment period was specified, consisting of two 3-month run-in period, each followed by a 9-month maintenance period. The primary endpoint was number of nocturnal symptomatic hypoglycaemic episodes during the maintenance period, analysed by intention-to-treat.

We investigated glycaemic variability from one day before to 6 days after switching in patients treated with long-acting insulin. 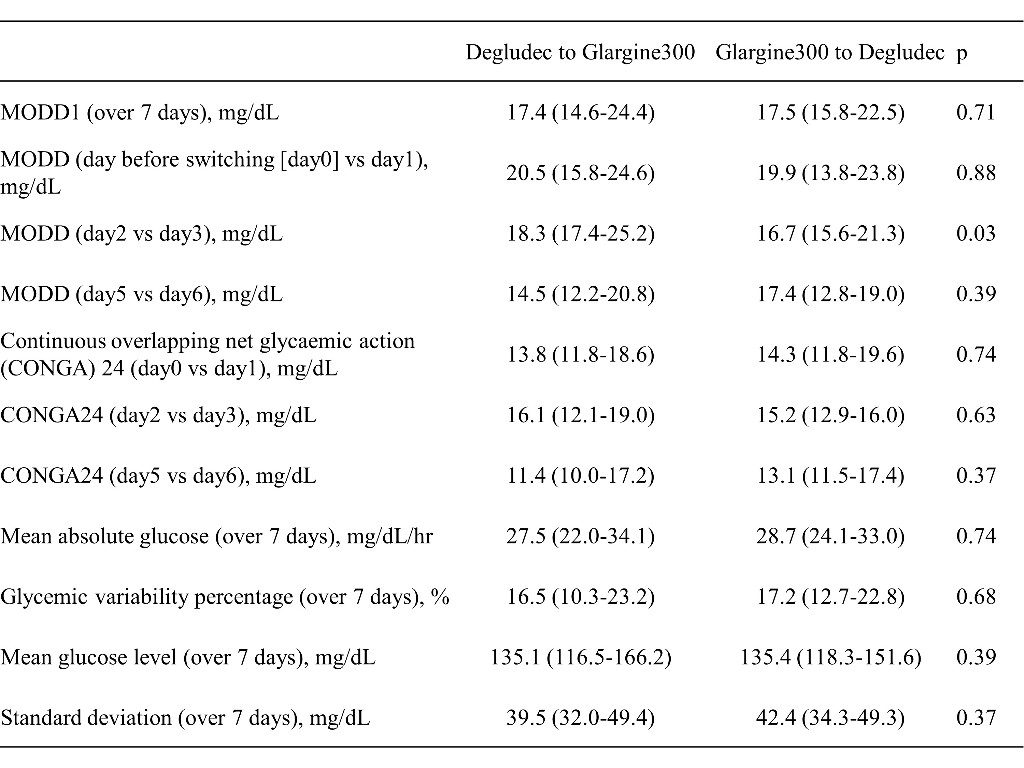 Day-to-day glycaemic variability between day2 and day3 was lower in pGtoD than in pDtoG.