Welcome to the AD/PD™ 2021 Interactive Program

- On Demand with Live Q&A

The viewing of  sessions, cannot be accessed from this conference calendar. All sessions are accessible via the Main Lobby.

FOLLOWING THE LIVE DISCUSSION, THE RECORDING WILL BE AVAILABLE IN THE ON-DEMAND SECTION OF THE AUDITORIUM.

MCI in Parkinson's disease (PD) has been a heterogeneous clinical entity caused by various brain pathologies. According to cross-sectional studies, it is present in approximately 25% of all PD patients; attention/executive function deficits seem to be most prevalent. Early cognitive deficits predominantly aﬀect attention and executive functions and result particularly from dopamine depletion in the basal ganglia. The cholinergic system has been implicated in cognitive dysfunction and in PD dementia in particular; serotonergic, glutamatergic, and noradrenergic systems could also be involved. Recent studies have pointed out the impact of metabolic syndrome and its treatment potential in decreasing the risk of cognitive decline in PD. Recommendations for symptomatic treatment with acetylcholinesterase inhibitors and memantine in PD-dementia have been published. Several drugs (e.g. rivastigmine, rasagiline, atomotoxetine) have been tested also in MCI-PD populations in small randomized placebo-controlled studies, however, without any conclusive positive results. Future studies should use specific biomarkers to help to identify distinct PD subgroups that might benefit from potential novel therapies. Non-pharmacological interventions may be beneficial in distinct patient subgroups, including exercise, cognitive training, non-invasive brain stimulation methods, and other techniques to enhance angiogenesis, synaptic plasticity, and neurogenesis. Neuroprotective or disease-modifying drugs for treatment of mild cognitive impairment in PD or even for preclinical stages are awaited.

To conduct a data-driven exploration of distinct cognitive profiles among patients with Parkinson’s disease dementia (PDD), and characterize these cognitive subtypes with respect to clinical and genetic characteristics as well as biomarkers of Alzheimer’s disease (AD).

From the Parkinson’s Progression Markers Initiative (PPMI) cohort we identified all individuals with Parkinson’s disease and dementia (N=74). Of these, 51 (69%) were initially enrolled as de novo idiopathic PD and 23 (31%) had a confirmed LRRK2, GBA, or SNCA mutation. Ward’s hierarchical clustering was applied to domain-specific neuropsychological test data, and the derived PDD subgroups were then compared on clinical characteristics, prevalence of genetic mutations, as well as APOE4 genotype and CSF AD biomarkers (available for 44 and 59 patients, respectively). 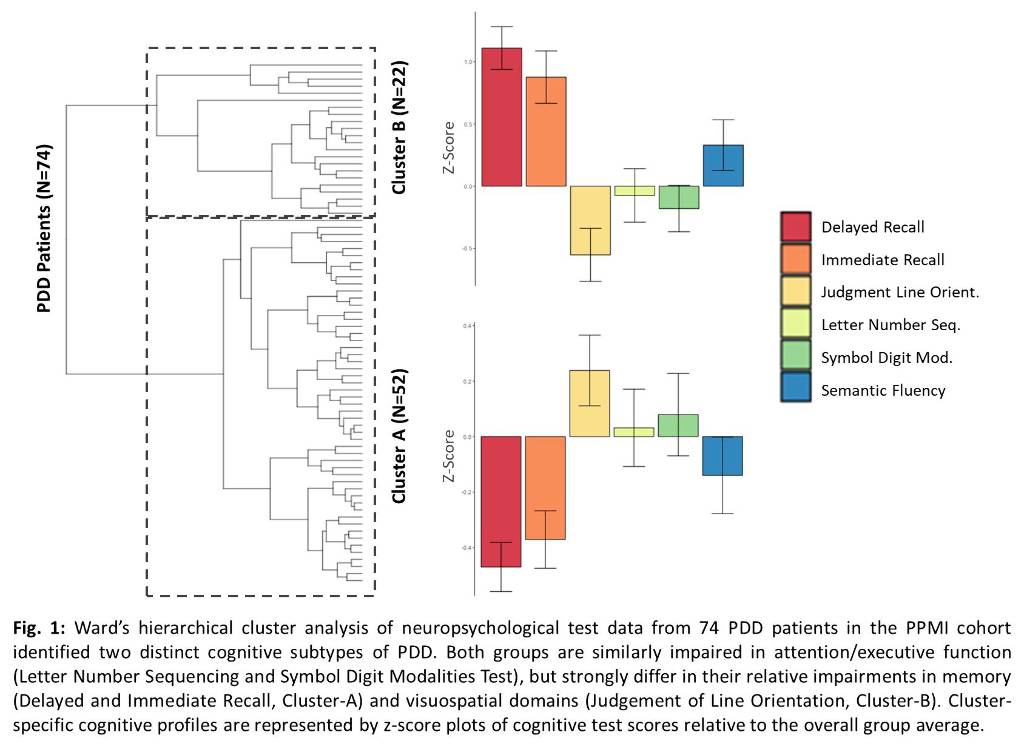 We identified distinct memory-predominant and visuospatial-predominant dementia presentations among PDD patients. These distinct cognitive profiles do not appear to be driven by comorbid AD pathology.

Parkinson's disease (PD) is a neurodegenerative disease causing deficits in decision‐making. However, the mechanism by which PD affects decisions remains unknown. Computational modeling has been used to study perceptual decisions that are based on sensory evidence and value-based decisions that depend on internal preferences in healthy controls (HCs). Our experiments aimed to characterize decision behavior in PD patients in an on and off dopaminergic state using computational modeling.

PD patients on and off dopaminergic medication and age‐matched HCs performed a value‐based decision task and made choices between pairs of familiar food items. The value of each item was determined in advance using a separate food‐rating task. The same participants also made perceptual decisions about the color of random dynamic dots with different color coherence. The reaction time (RT) and choice performance in both tasks were measured and fitted with a drift‐diffusion model (DDM).

Deformation-based morphometry (DBM) maps computed from 74 PD patients (50 men) T1-weighted MRI at baseline, two and four years, and 157 healthy control (115 men) at baseline in the PPMI database were used as atrophy maps. Then, W-score maps were computed to regress out the expected effect of age and sex. Atrophy differences between time points were compared with rANOVA and the pTFCE approach (pFWE<.05). To investigate the relationship between regional cell density and atrophy progression, a virtual histology approach with seven cell-class gene expression maps from Seidlitz et al. (2019) were used.

Huntington’s disease (HD) has historically been conceptualized as eminently a subcortical dementia due to basal ganglia degeneration. Accordingly, the cognitive domains assumed to be prototypically affected in HD are frontal-executive functions, attention and psychomotor speed. However, compelling evidence proves that, from the early stages of the disease, the pattern of brain atrophy characterising HD extends beyond the basal ganglia and also involves posterior-cortical and temporal regions. Thus, in HD, accurate neuropsychological examination reveals a complex cognitive phenotype not limited to frontal-striatal functions.

In addition to frontal-executive, attention and psychomotor speed disturbances, deficits of different severity at level of visuomotor integration, episodic and autobiographical memory, visual perception, mental rotation, arithmetic reasoning, social cognition and language can be also detected decades before the diagnosis of the disease.

The time of presentation and the pattern of progression of cognitive changes in HD show a relation with the disease burden. However, a marked heterogeneity is also frequently observed between patients sharing equivalent CAG repeat length, education and age. It suggest, that additional mechanisms rather than those driven by disease burden may also contribute to the complex cognitive picture of HD. Ultimately; the progression of cognitive deterioration along HD always associates a significant impact on functional independence to the point of dementia.

Here we review the cognitive aspects of HD, emphasising on the neural substrates of general-to-specific cognitive changes, the affected cognitive domains and processes, the neuropsychological assessment approaches, and the possible mechanisms participating in the differential expression of cognitive deterioration in the HD population.

Previous MRI studies reported iron accumulation within the striatum of Huntington’s disease (HD). However, the pattern and origin of iron accumulation is poorly understood. This study characterized the histopathological correlates of iron-sensitive ex vivo MRI in HD brains. We delineated the pattern and co-localization of iron with specific cells such as microglia and astrocytes. 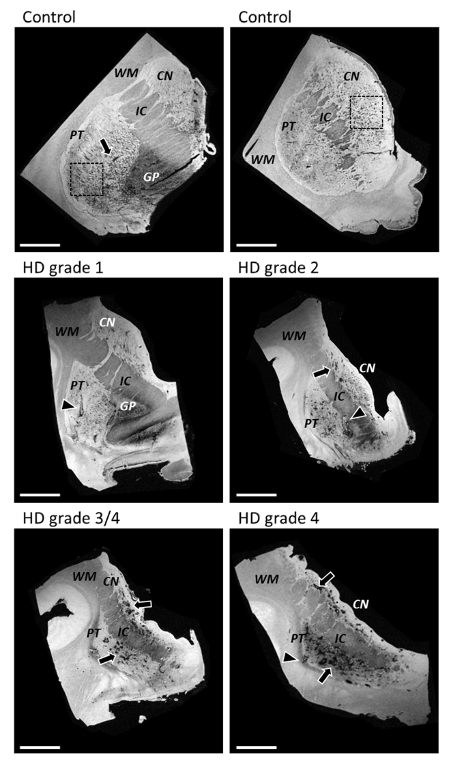 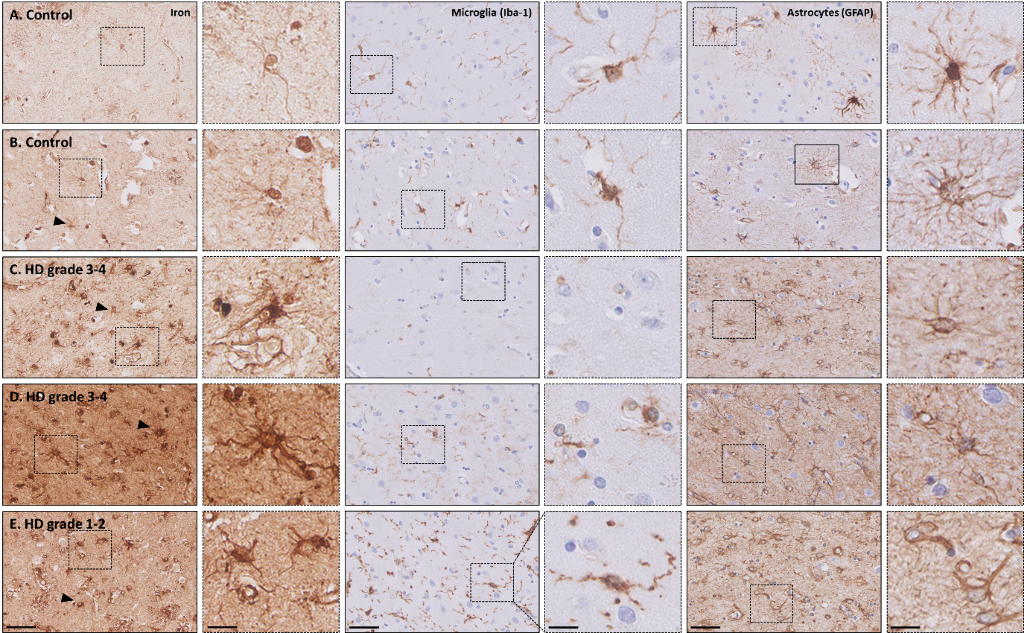 Fig2. Histological examples in two control and three HD striata. The iron staining showed a very similar pattern as the staining for astrocytes.

Ex vivo MRI showed that the HD striatum was characterized by large focal hypointensities that co-localized with enlarged perivascular spaces. Histopathology showed reactive astrocytes as the predominant source of the increase of iron within the striatum. These results are important for the interpretation and understanding of underlying mechanisms of T2*-weighted MRI in HD.

THE PROOF-HD STUDY: PRIDOPIDINE’S OUTCOME ON FUNCTION IN HUNTINGTON DISEASE

Aim: To assess the effect of pridopidine 45mg bid on TFC in patients with early stage HD.

The target population is early HD (TFC≥7) participants with an expected TFC decline of -0.8 to -1 points/year.

We use data from prior trials where pridopidine has showed clinically meaningful and nominally significant benefit on endpoints to maximize likelihood of success in the design of the PROOF-HD trial.