FOLLOWING THE LIVE DISCUSSION, THE RECORDING WILL BE AVAILABLE IN THE ON-DEMAND SECTION OF THE AUDITORIUM.

MUTUAL INTERACTIONS BETWEEN IMMUNITY AND DEGENERATION IN ALZHEIMER’S DISEASE

While previous studies suggest the implication of herpes simplex virus (HSV) in the onset of Alzheimer’s disease (AD), no study has examined its association with early neuroimaging markers of AD. Here, we aimed to further investigate this hypothesis by combining data from two French cohorts.

In the Three-City and the AMI cohorts, associations between HSV infection and i) hippocampal volume (n=352), ii) white matter alterations in the parahippocampal cingulum and fornix using diffusion tensor imaging (n=260) and iii) incidence of AD (n=1599) were assessed according to APOE4 status.

Infected subjects presented significantly more microstructural alterations of the parahippocampal cingulum and fornix including lower fractional anisotropy and higher mean and radial diffusivities. Regarding more advanced markers of the disease (hippocampal volume and incidence of AD), an interaction was found between being infected with HSV and APOE4 status. Among APOE4 carriers, infected subjects presented lower hippocampal volumes, although not significant (p=0.09), and had a twice higher risk of developing AD (aHR=2.72 [1.07–6.91] p=0.04) and a 3-times higher risk if their anti-HSV IgG level was in the highest tercile, possibly reflecting more frequent reactivations over time (aHR=3.87 [1.45–10.28] p=0.007). Among APOE4 noncarriers, no associations were observed between HSV status and hippocampal volume or incidence of AD.

Our findings suggest an increased risk of AD in subjects infected by HSV. These results reinforce the need to further investigate the infectious hypothesis of AD and the possibility of related preventive treatments.

Recurrent infection with herpes simplex virus type 1 (HSV1) has been discussed as contributing to Alzheimer’s disease (AD) pathology. HSV1 triggers beta-amyloid (Aβ) accumulation and tau pathology in cell culture and animal models. Aβ limits the activity of the virus. In humans, HSV1 seropositivity in particular with parallel cytomegalovirus (CMV) seropositivity increases the risk for AD. In this study, the associations of serological HSV and CMV biomarkers with CSF AD biomarkers in humans with AD and cognitively normal controls (NC) were investigated.

In 82 patients with AD and 30 NCs, total Tau (tTau), pTau, Aβ42 and Aβ40 were measured in CSF. All patients were positive for amyloid pathology (amyloid PET or CSF-Aβ42/Aβ40 ratio). CSF to serum anti-HSV1/2-IgG and anti-CMV-IgG antibody index (AI-IgGHSV1/2 and AI-IgGCMV) were determined by ELISA. In HSV1-or CMV-seropositives, associations between HSV-AI, or CMV-AI, and CSF AD biomarkers were investigated by linear regression models controlled for APOE genotype, sex and age.

CSF-pTau was significantly and positively predicted by AI-IgGHSV1/2 and negatively by the CSF-Aβ42/Aβ40 ratio in HSV1-seropositive patients with AD, both in univariate and multivariate analyses. Furthermore, a significant and negative interaction between the AI-IgGHSV1/2 and CSF-Aβ42/Aβ40 ratio on pTau was found. AI-IgGCMV was not significantly associated with AD biomarkers. In healthy controls no associations were identified between viral AI and AD biomarkers.

The results support the hypothesis of a specific effect of HSV on AD pathology.

SARS-CoV-2 may cause early delirium in older adults with dementia. To better understand its pathogenesis, we describe cases of Covid-19 in older adults and in one young adult for comparison. We aim to report the clinico-pathological features, particularly the characteristics of microglial activation and the presence of SARS-CoV-2 and lymphocytes in the brain.

Ten brains from subjects with laboratory-confirmed Covid-19 were collected for forensic and diagnostic purposes. Based on the clinical findings and possible topographic distribution of ACE2-receptors in the brain, the sub-ependymal, anterior fronto-temporal, hippocampus, thalamus, and brainstem areas were analysed. Haematoxylin-Eosin and Luxol Fast Blue were used for standard histology. For immunohistochemistry, antibodies against CD68, CD3, CD20, CD34 and SARS-CoV-2 were used. Microglial nodules were graded semi-quantitatively: 0-3 (none-mild-moderate-severe).

Microglial nodules in limbic structures and brainstem are probably related to disturbances in behaviour and alertness, respectively. Delirium appears to be caused by a strong and early microglial response, rather than direct viral invasion of the brain.

To identify clinical, radiological, and laboratory findings in COVID-19 patients who complain of neurological symptoms.

During April - July 2020, there were 22 confirmed COVID-19 patients with neurological complaint. The mean age of the patients was 60.4 (SD 15.8) years old.The most commoncomplained neurological symptom were altered mental status (50%), hemiparesis (27.3%), and tremor (22.7%). More than half of the patients (81.8%) had a comorbid condition or past history related to neurological symptoms. Laboratory examination results showed increased NLR (neutrophil-lymphocyte ratio)(50%), anemia (45.5%), and leukocytosis (40.1%). The most common neuroimaging feature was ischemic / infarct (50%).

The neurological complaints in COVID-19 patients may be caused by exacerbation of pre-existing comorbidities due to the severe inflammatory process triggered by COVID-19. More research is needed to confirm the mechanism of nervous system damage in COVID-19.

COVID-19 has impacted clinical study conduct significantly, particularly in Alzheimer’s disease, which includes an aged population with increased comorbidities. Perceived risk of infection by traveling to a clinic, together with widespread clinical site closures and movement restrictions, reduced study drug compliance. This study evaluated the utilization of home administration of the study drug in the Phase III trials GRADUATE I and II (NCT03444870; NCT03443973), intended to improve study drug compliance and thus preserve study integrity.

The GRADUATE studies are ongoing and will evaluate gantenerumab versus placebo administered subcutaneously. The protocol allows home administration for consenting participants. After the COVID-19 outbreak, home nursing scope was expanded. Uptake of home nursing administration prior to and during different phases of the pandemic was analyzed.

The availability of home nursing in GRADUATE, including its expansion in response to the COVID-19 pandemic, resulted in a large and rapid increase in uptake – likely facilitated by gantenerumab’s subcutaneous route of administration. Expanding home administration reduced the risk of study drug non-compliance, thereby helping to preserve study integrity. Such benefits of home administration could extend beyond clinical trials to the real world, once drugs are approved.

To assess anxiety and its relationship to tau pathology and COVID-19 induced subjective stress in the participants of a biomarker observational study during the COVID-19 pandemic.

Participants of the Translational Biomarker of Aging and Dementia (TRIAD) cohort who had baseline measures of cognition (MMSE, MoCA), anxiety (GAD-7) and the tau tracer [18F]MK-6240, were assessed during the COVID-19 lockdown period, to evaluate their individual change in anxiety and cognitive decline. A measurement of COVID-19 induced subjective stress was included at the follow-up time point as well. 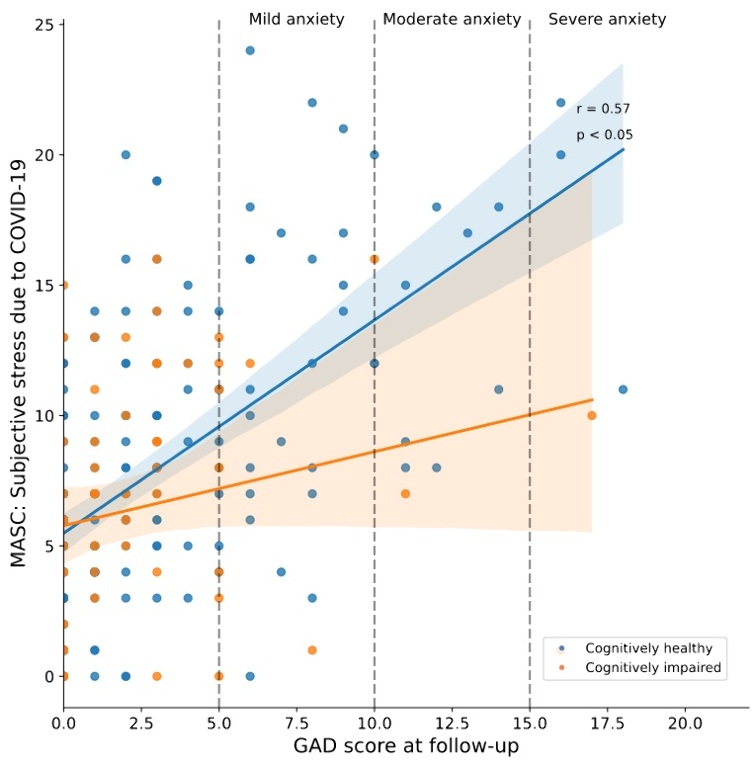 Cognitive impairment differentially affected anxiety among participants of this longitudinal observational study during the lockdown period. The presence of tau negatively affected the difference in GAD scores between the two time points. Further studies should determine whether these effects can impact the outcomes of clinical trials.